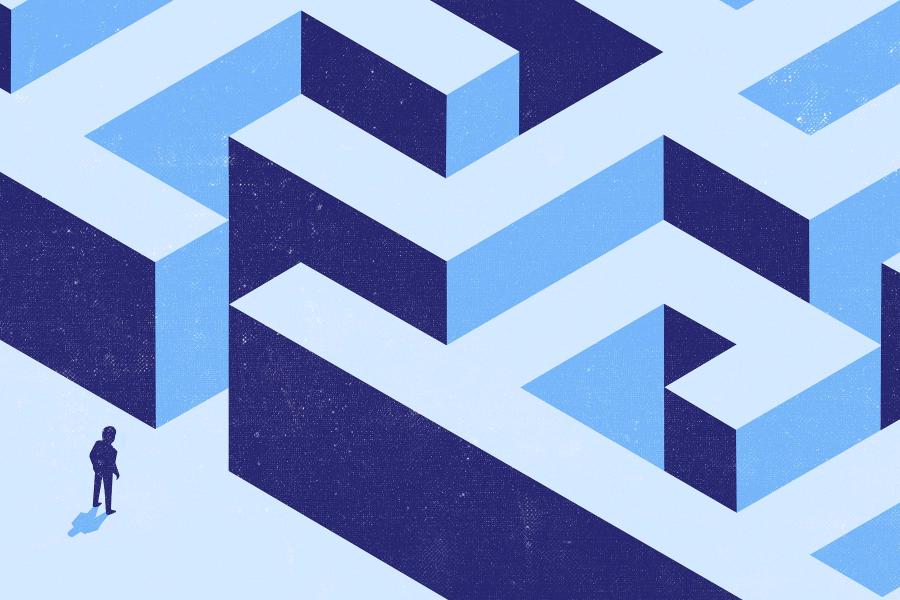 Just when we were getting comfortable calling SARS-CoV-2 variants by their Greek monikers, omicron rapidly evolved into multiple mutating subvariants identified by a confusing mix of letters and numbers: BA.1. BA.5. B.1.1.529. Now, as virologist Andrew Pekosz explains, some of these subvariants are each developing some of the same mutations that render monoclonal antibodies ineffective. What threats do these subvariants pose to the rest of our COVID-fighting arsenal?

In this Q&A, adapted from the Nov. 9 episode of Public Health On Call, Pekosz, a professor in Molecular Microbiology and Immunology, talks with host and director of the Bloomberg American Health Initiative Joshua Sharfstein about the many faces of omicron, which tools are still holding up against it, and what virologists are still waiting to see from this virus.

Today we're going to talk about the COVID-19 variants. You sent me a graphic that looks like it has a lineage of about 100 or so variants just of BA.1 and BA.2.

And throw in a little bit of BA.5—because here in the U.S. in particular, that has been the virus variant that has been dominating—and you've got a real mess in terms of trying to keep track of which viruses are coming from where and, importantly, what mutations they're carrying.

I thought there were going to be Greek letters for the major variants. What happened?

Well, the Greek letter idea was great for simplifying things. But we started with four lineages that were called omicron, and they were all slightly different. Each of those has continued to circulate and accumulate mutations.

In the past, when one variant has emerged, it's become dominant globally. We haven't had this situation with SARS-CoV-2, where we had four lineages starting off, each of which have now mutated into sub-lineages. It then becomes a nightmare in terms of keeping track of everything because no one variant is outcompeting the others; they're all around, at low levels. And even more importantly, they're all now accumulating the same types of mutations that are of really high concern to us virologists. 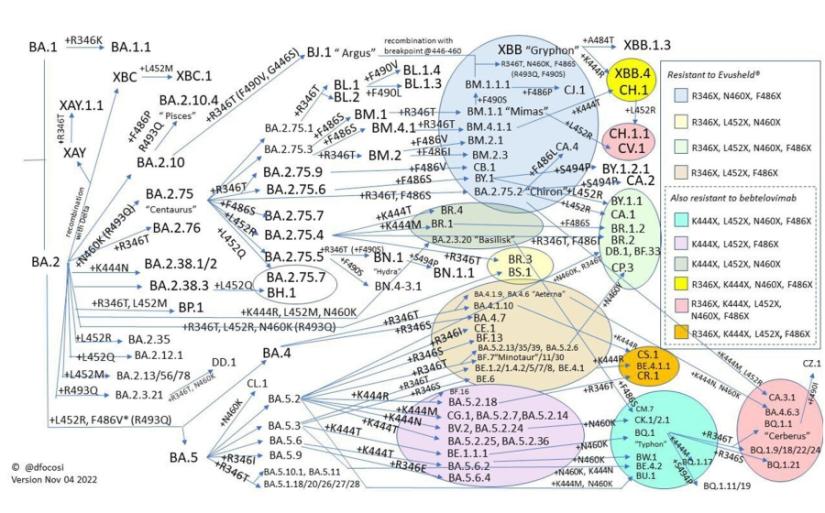 Image caption: A graphic showing the lineages of the BA.1 and BA.2 COVID-19 variants

What are those mutations? And what do they mean?

Out of all these different lineages, there seem to be a couple of common themes coming through. Not to get too detailed, but as just two examples, each of these separate lineages has independently picked up mutations in amino acids 346 and 440. This is an example of what we call convergent evolution. All of these omicrons mutated and moved off in lots of different directions—but now they're all [developing] a set of common mutations that seems to be advantageous to all of them, despite the fact that they look so different from each other right now.

Why are those mutations important? They eliminate parts of the viral spike protein targeted by the vaccine and by monoclonal antibody treatments, which a lot of immunocompromised people take because they don't have very good responses to the vaccine.

Let's talk about the clinical impact for the monoclonal antibodies. Do these mutations totally evade the antibody?

The issue is the mono part of monoclonal. These monoclonals are one specific type of antibody, and as soon as there's a mutation to get around it, it fails.

Right. A couple of companies have tried to put two together, and that works to some extent. But again, after a while, especially given all the lineages and all the mutations omicron is picking up, it's just a matter of time before they fail. And again, that second generation [of monoclonals] that recognizes the new variants hasn't come down the pipeline clinically.

Well, that's not good news for people who are relying on those to stay healthy because they don't have a vaccine response.

Absolutely. Solid organ transplant recipients in particular rely on these monoclonal antibodies as their means of protection from COVID-19. Often they're not eligible to take the antiviral drug Paxlovid because of drug interactions, so monoclonal antibody treatment is their only option.

Vaccine response is not monoclonal—your body makes many different types of antibodies when you get a vaccine. So does that make it harder for these variants to evolve completely around vaccine protection?

It does. And the bivalent COVID-19 vaccine, which has the original vaccine plus an omicron spike protein in it, is much more specific to the viruses that are circulating right now. Now, again, viruses do what viruses do, and they're picking up some mutations to evade that immunity. But because the vaccine induces this polyclonal response, we're seeing stronger protection against severe disease with the bivalent vaccine, despite these mutations coming up.

"We're seeing stronger protection against severe disease with the bivalent vaccine, despite these mutations coming up. But as with most interventions at the public health level, unless we get good buy-in and get it into the population to a high extent, it's not going to serve the purpose it was supposed to serve."
Andrew Pekosz
Professor in Molecular Microbiology and Immunology

So there is no basic change to the recommendation to get vaccinated.

Absolutely not. If anything, it's been surprising to me how low the uptake has been for the bivalent vaccine because this update could have gotten us far ahead of the virus. But as with most interventions at the public health level, unless we get good buy-in and get it into the population to a high extent, it's not going to serve the purpose it was supposed to serve.

What do you think the future is for all these variants with such intense and frequent mutation? Are we just going to be tracking them and looking at whether the monoclonals still work, how we're doing with vaccines, looking at the outcomes for people who have been vaccinated with different products?

Well, we have to realize that we now have tools: We have vaccines, we have testing, we have antivirals. All these things keep down the severe disease with COVID-19. And it also keeps down, to some degree, infections and transmission.

The problem with SARS, though, is it's mutating and evolving at a much, much faster rate than a virus like influenza is. 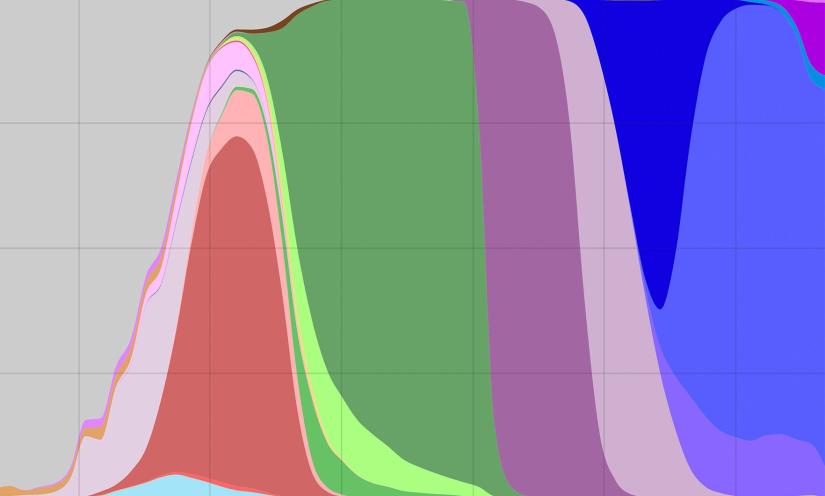 Image caption: A graph showing the total number of SARS-CoV-2 variant sequences over time in the U.S. The purple section and everything to the right of it represent omicron variants.

Is there a risk that tests might stop working and would have to be changed to keep track with the virus?

That's a great question. There always is a risk. We and other laboratories are always providing the rapid antigen test companies with new variants so they can test their kits for reactivity against these variants. It's on everybody's radar screen. Many of the companies know exactly the [genetic] sequences in the virus that their tests recognize. They can almost tell from a sequence whether these new variants might be a problem for their detection kits, and they go out and test against them.

Is the variability in the virus affecting the specific genetic sequences that the PCR tests look for?

For the most part, the PCR-based tests are holding firm. They target regions of the genome where historically coronaviruses haven't mutated much, so many of those PCR primers continue to recognize variants. We've had a few examples of tests that haven't worked but then get updated. The companies are really looking at those sequences and are ready to update if anything would emerge that might interfere with their sensitivity of detection.

At the beginning of this pandemic, we didn't think coronavirus mutated quite as much as flu. But now you're saying this is mutating much faster than flu. Is this particular virus different from the others?

I think the scale of this pandemic is one factor that probably hasn't occurred with other coronaviruses that have jumped from animals to humans. We also have never been able to track a coronavirus's entry into the human population as well as we've been doing with this one, so we're seeing a lot of details of what the virus has to do to optimize itself to replicate in humans. This is real-time evolution we've been watching, which we've never had a chance to track before. So it's hard for us to draw the comparisons to when other coronaviruses first entered the population.

And maybe we miscalculated because we essentially were relying on past experience.

Absolutely. And I think the big question right now is whether the virus will show seasonality. Many of us in the virology field have been waiting for this. We assumed it would peak in the winters, we assumed it would go away in the summers—but we haven't seen that seasonality yet. If anything, we're settling in at a steadier number of cases, almost year-round.

If the virus goes seasonal, that makes it a little bit easier for us to vaccinate and come up with strategies to contain it. If it's a year-round threat, then we really have to keep our guard up and probably update vaccines and therapies and those kinds of things at a much faster rate.

That's one hypothesis we've had about respiratory viruses that circulate only in the winter. The combination of population immunity and the inability of the virus to mutate very quickly means it spreads in ideal situations—in the winter when you're indoors in close contact—and then in less-than-ideal situations like the summer, you don't see the virus spreading as well. Again, we haven't seen that transition yet with SARS-CoV-2, and that's what people are really interested in trying to understand: whether that will happen, or whether we'll be dealing with this on a monthly basis.