What we learned from the midterm elections

Scholars from the SNF Agora Institute at Johns Hopkins convened to discuss the influence of factors such as 'Dobbs,' the war in Ukraine, and the specter of the 2024 presidential race on this year's midterm elections

Tuesday's midterm elections marked the first national voting day in the hostile political environment that's existed since the Jan. 6, 2021, insurrection on the U.S. Capitol. Fears about a large-scale breakdown of American democracy, however, turned out to be unfounded, according to scholars from the SNF Agora Institute at Johns Hopkins.

"I went into this election extremely concerned that we would have ended up … with huge amounts of contestation and election rejection, particularly by Republicans who said the 2020 election was rigged and that Trump had actually won," said Lilliana Hall Mason, an associate professor of political science, in a discussion Thursday. "I was somewhat relieved in the sense that so far it does seem Republicans who are losing elections are conceding … and peacefully walking away, and that itself is going to reduce the risk of violence and the risk of social upheaval."

That sentiment also applies on the world stage, said Henry Farrell, professor of international affairs at the School of Advanced International Studies. "I think that there is a lot of quiet relief in many a European capital," he said.

Thursday's briefing—which also featured Yascha Mounk, associate professor of the practice of international affairs at SAIS, and Leah Wright Rigueur, professor of history—explored the surprises and implications of this week's elections, as early results indicate a likely divided Congress under the remainder of President Joe Biden's term.

SNF Agora will host a second event titled "The 2022 Midterms: What Happened—and What Now?" It will take place 5 p.m. on Monday, Nov. 14 in the Mason Hall auditorium on the Homewood campus. The panel will featur Chris Stirewalt, American Enterprise Institute senior fellow, retired Sen. Barbara Mikulski, and Stephanie Young, executive director of Michelle Obama's When We All Vote.

Among the topics covered Thursday:

The role of Dobbs in motivating the electorate

In recent years the court's longstanding stature as an apolitical and nonpartisan body has eroded, said Wright Rigueur, with no greater evidence than the early leaking of Dobbs to the public. "It laid bare the politics and the politicization of the Supreme Court in a way that past decisions had hinted at, that the justices could dance around," she said.

Dobbs ended up influencing the midterms more than anticipated, Wright Rigueur said, splitting even conservative voters on some candidates and state ballot initiatives. "Going forward, I think it becomes one of those topics that even as a central part of current conservative ideology and agenda, it is now also apparent that it's is a liability."

Young voters—politically activated by issues including Dobbs, erosion of voting rights, climate change, and debt reform—were critical this year. Normally the 18-29 age range shows very little participation in midterm elections, but 2022 marked the second-highest turnout from this group in the last 30 years, according to Wright Rigueur.

The 2022 Midterms: What Happened—and What Now?

Register for the Monday, November 14, discussion 5-6 p.m. on the Homewood campus

Though the Black Lives Matter movement successfully mounted a voter registration drive for the 2020 elections, turnout weakened in 2022, she said. There are exceptions, such as Georgia's U.S. Senate showdown between Democrat Raphael Warnock and Republican Herschel Walker, a contest now headed to a runoff. Warnock still has a shot for the Senate seat, Wright Rigueur said, explicitly due to Black voters who were mobilized by the previous grassroots efforts of gubernatorial candidate Stacey Abrams and aligned organizations.

An "empowered and substantial Republican majority in the House" was predicted to cut off U.S. funding for Ukraine's efforts in the war with Russia. But with the latest results showing a slimmer Republican House majority than anticipated, foreign policy will likely fall by the wayside of priorities, Farrell predicted. "I think there will be members of a new Republican House who are pro-Russian, who are very much against the aid for Ukraine … but I think there's also a real faction of House Republicans who would even enthusiastically vote for renewed aid bills for Ukraine," he said.

Trump's role as a "unique electoral asset—once considered "rock solid law" for Republicans—is losing relevance, according to Mounk. "Somehow Donald Trump managed to [create] this myth that the old Republican Party lost everything that only he could win. And that myth persisted even through a big blue wave in 2018, even through Biden's victory in 2020, at least with parts of the Republican base," Mounk said. "I think it's going to be very hard to sustain after the failed red wave of 2022.

But Democrats should not dismiss the polls and research showing the unpopularity of their own party, Mounk said. Many voters dislike Biden, certain Democratic members of Congress, and a perceived extremism in the party. "If they want to achieve a victory over Trump or [Ron] DeSantis in 2024," he said, "they have to take very seriously the things that continue to make most Americans skeptical of them." 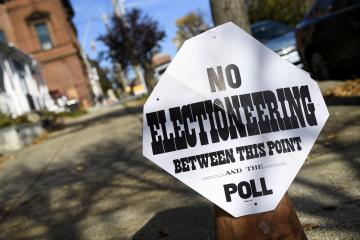