Madeleine Albright, the first female U.S. secretary of state and a leading figure in American foreign policy who studied at the Johns Hopkins School of Advanced International Studies in Washington, D.C., in the 1960s, died Wednesday. She was 84. 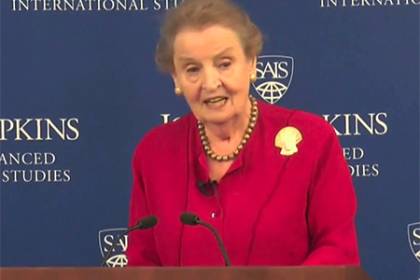 The cause was cancer, her family said in a statement.

Madeleine Albright, born Marie Jana Korbelova in 1937, was a native of Prague—capital of what was then Czechoslovakia—and emigrated to the U.S. in 1948 as a refugee. She was a tireless champion for freedom and democracy and a central figure in the administration of President Bill Clinton, first as U.S. ambassador to the United Nations, then a secretary of state from 1997 to 2001.

"Secretary Albright was a towering figure in American foreign policy for nearly five decades, and a moral beacon for friends of democracy and human rights around the world," SAIS dean Jim Steinberg wrote in a statement Wednesday. "Her accomplishments are well known and too numerous even to begin to recount. Her journey from a refugee fleeing the Nazis and later communist oppression to the pinnacle of public service as ambassador to the U.N. and U.S. secretary of state is a testament to the power of the American idea."

Albright studied Russian and international relations at SAIS briefly beginning in 1962 before moving to Long Island. She earned a master's and doctoral degree, as well as a certificate in Russian, from Columbia University. While there she took a graduate course taught by future SAIS faculty member Zbigniew Brzezinski, who would later serve as a counselor to President Lyndon B. Johnson and national security advisor under President Jimmy Carter.

Albright received an honorary degree from Johns Hopkins in 1994. She delivered keynote remarks and was a guest of honor at the 30th anniversary celebration for the Hopkins-Nanjing Center in 2016.

"Secretary Albright was a towering figure in American foreign policy for nearly five decades, and a moral beacon for friends of democracy and human rights around the world."
Jim Steinberg
Dean, School of Advanced International Studies

"For me, this is an enormous personal loss," Steinberg wrote. "I met Madeleine nearly 40 years ago, when she served as an advisor to former Vice President Mondale's 1984 Presidential campaign. We worked together on many subsequent campaigns, some successful and some less so, ever since. I had the privilege of serving with her during the Clinton administration, when her advocacy of the United States as the 'indispensable nation' galvanized U.S. policy in the post-Cold War era. She was a mentor, friend, and inspiration to me and to generations of young foreign policy professionals. She will be deeply missed."

Former U.S. Sen. Barbara Mikulski, Homewood Professor of Public Policy at Johns Hopkins, met Albright in 1984 when they were campaigning to elect Geraldine Ferraro as the first female vice president alongside presidential candidate Walter Mondale. Mikulski and Albright worked side-by-side while serving in the legislative and executive branches to promote democracy around the world.

"Today I mourn the loss of a colleague but most profoundly, a dear longtime friend," Mikulski said. "Madeleine was the epitome of the American dream who often proudly shared that it is only in the United States where a refugee could one day be a Secretary of State and today, we proudly salute this Secretary of State who served as a refuge for us all."

In September 2020, Albright was a featured guest in a series hosted by the Johns Hopkins Center for Global Health titled "Women in Global Health: Exploring Non-Academic Careers." The conversation focused on Albright's career and the challenges she faced as a woman in male-dominated fields. 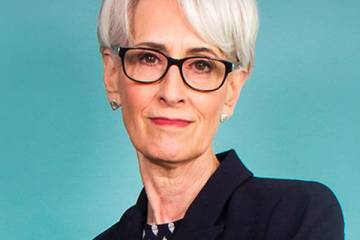 On empowerment, leadership, and diplomacy 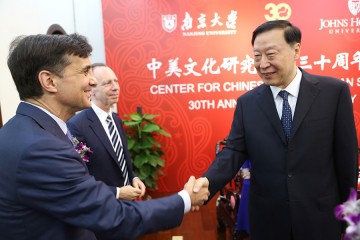