In advance of her talk at Johns Hopkins on Tuesday evening, Sherman talks about her career and what the next generation of leaders can do to support each other

When Wendy Sherman was in high school, she would venture from her home in Baltimore County to the Homewood campus of Johns Hopkins University, where she would tutor Baltimore City school kids under the direction of the university's chaplain, Chester Wickwire. 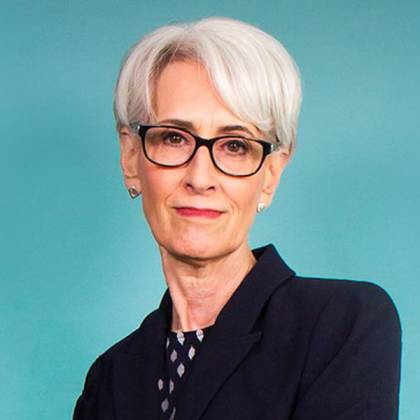 Those days spent volunteering as a teen, along with other formative experiences, instilled in Sherman a sense of public service, and since then, she has risen to some of the highest diplomatic ranks in the U.S. government. She served two presidents: She was the undersecretary of state for political affairs during the Obama administration and the special adviser to the president and secretary of state during the Clinton administration. She was instrumental in negotiations on North Korea's nuclear weapon and ballistic missile program and was lead negotiator for the Iran nuclear deal.

Sherman returns to Homewood on Tuesday for a talk sponsored by J Street and supported by the SNF Agora Institute at Johns Hopkins. She will discuss her new book, Not for the Faint of Heart: Lessons in Courage, Power and Persistence, as well as her experiences negotiating with foreign adversaries and what it's like to be a woman in the halls of power of the U.S.

"Ambassador Sherman embodies the essence of values-driven leadership," says former Sen. Barbara Mikulski, who represented Maryland in the U.S. Senate for decades and is now a Homewood Professor of Public Policy at Johns Hopkins.

Mikulski, who helped arrange the event, will provide introductory remarks during the talk.

"She'll bring the experiences of a lifetime and insights into her great career in politics and her great career in diplomacy," Mikulski says. "And she'll show that character really does count, that relationships matter, and she'll offer a beacon for moving ahead with a sense of mission and purpose."

The Hub spoke with Sherman to discuss the art of diplomacy, representing the United States government, and what the next generation of leaders, particularly women leaders, can do to support one another.

You held key leadership and diplomatic roles in two major nuclear negotiations—with North Korea and with Iran. What were those experiences like?

It was a privilege to represent the United States in trying to wrangle agreements in both of these cases. They were quite different from each other because the countries are different. North Korea is more like a cult than a country, but we began to make some real progress on a moratorium to stop the testing of long-range missiles, which would have meant, had we been successful, that today we wouldn't have to worry about a delivery system for the nuclear weapons that North Korea has. We were on our way to getting an agreement, but we ran out of time in the administration.

It was an extraordinary opportunity to try to make a difference, and unfortunately, because of choices made by other administrations and, most importantly, choices made by North Korea, we now have a country with many nuclear weapons and the means to deliver them, and that is a very dangerous situation and a very difficult negotiation.

"When you sit at the negotiating table as the lead negotiator for the U.S., what's most important is not that you are Wendy Sherman or a woman or, in my case, an American Jew, but that you are the United States of America. That is an incredibly powerful role."

I was engaged in the negotiation process with Iran for the four years I spent as undersecretary of state for political affairs, which is the political director of the U.S. government. At the same time, I was responsible for every other region of the world, so I was quite busy—I went to 54 countries during those four years, some of them multiple times.

Whereas the North Koreans, I think, are relatively transactional, the Iranians are much more complex and sophisticated negotiators. The Iran deal was a multilateral negotiation, not just a bilateral negotiation with the U.S., so it was very complicated, very technical. The last two years of that negotiation were when we got real traction and ultimately came to an agreement that prevented Iran from obtaining a nuclear weapon. President Trump has decided to withdraw from that agreement, and I think that was a very bad decision in terms of the security of our country.

Were there specific negotiating skills or tactics that you found most effective during those talks?

Well, first of all, I think that for any negotiation to be successful, you have to know in advance what success would look like. During the talks with Iran, President Obama was very clear about what the objective was: that Iran never have a nuclear weapon and that we shut down all the pathways to that nuclear weapon. That would mean that they couldn't get highly enriched uranium, they couldn't get weapons-grade plutonium, they couldn't have a covert supply chain. And having that clarity was immensely helpful. In the negotiations with North Korea, the goals were that we should get a moratorium on missiles that would be capable of carrying nuclear weapons.

I think in every instance where you negotiate, you have to know what the interests are of others around the table and see whether you can find common ground while never, ever compromising your ultimate objective. I think those are important parts of any successful negotiation, and as a result of having that kind of clarity, you also have to be willing to walk away if the objective can't be reached.

In your new book, you discuss instances in your career when you were the only woman in the room. Did that dynamic affect the way you did your job, or the way you developed your persona as a negotiator?

One of the things that Secretary of State Madeleine Albright taught me is that when you sit at the negotiating table as the lead negotiator for the U.S., what's most important is not that you are Wendy Sherman or a woman or, in my case, an American Jew, but that you are the United States of America. That is an incredibly powerful role, and that you should embrace and make use of that power. And I would say that is the same wherever you are. Director of child welfare is a role that comes with authority. Being the chief of staff for a member of Congress comes with authority. Being a mother or a father comes with authority. And everyone should embrace the role, not abuse the power and authority that comes with that role, but make good use of it for a good end.

Women in particular have a strange relationship to power. We often think that it's sort of icky. It's not icky. It's a great thing when used for good reasons and to achieve good purposes, and we should embrace the power we have and make good use of it. For some people, that is being the behind-the-scenes player, and that's fine. For others, it's being in front of the curtain, and that's fine. So know who you are, and then use all the power that comes with that definition.

What are some ways women can work to empower other women?

Every place I ever worked I tried to build a support system, largely of other women. Back when I was director of child welfare in the state of Maryland, there was a group of women that met on Thursday evenings over drinks down in the Inner Harbor so that we could just share stories and help each other out and give each other support. When I worked on Capitol Hill as then Congresswoman Mikulski's chief of staff, there was a group of other women chiefs of staff who got together monthly. I tried to do that everywhere I worked.

What advice do you have for the next generation of leaders—those who may be in class at Johns Hopkins right now, planning their careers?

Well, I think that it's incredibly important that young people get a set of core skills and then make use of those core skills in whatever great opportunities present themselves. Women, particularly if they choose to have children, are going to lead an unexpected life because there will likely be some career interruptions. I want them to embrace that because the best opportunities and the best things that happened to me in life were quite unexpected and have given me tremendous satisfaction and honor and privilege to serve my country.

Young people should take risks. When you graduate, take a job without worrying if it is the perfect job or the best choice. Just get started; there is a long adventure ahead. Women, in particular, need to keep in mind a Hewlett Packard study that says that if men believe that they have 60 percent of the qualifications for a job, they're qualified, whereas women believe they have to have 100 percent. I would urge young women to believe that if they have 60 percent of the qualifications, they'll be just fine because they can learn the rest on the job. I hope they go for those opportunities. Take risks. The worst thing that can happen is you'll fail, and then you'll get yourself up and start again.

You're a native Baltimorean. Are you looking forward to returning to Johns Hopkins' Homewood campus?

Yes! My folks lived right across the street from Johns Hopkins. The university has a long history of community activism and public service. I hope that continues. And Hopkins also has a history of embracing science, and I don't think there's anything in the future that won't involve an understanding of science, so I think Hopkins students have tremendous opportunities, and I hope they use every single one of them.

And finally, Hopkins has a phenomenal resource now. Her name is Sen. Barbara Mikulski, and I would urge every Hopkins student to try to get into one of the classes that she's co-teaching, find an opportunity to talk with her. I have learned so much from working with her and for her, and it is just a really precious resource that Hopkins now has.

Wendy Sherman will speak Tuesday, Dec. 4 at 7 p.m. in Mason Hall on the university's Homewood campus. She will be available to sign copies of her book, Not for the Faint of Heart: Lessons in Courage, Power and Persistence, which will be available for purchase.