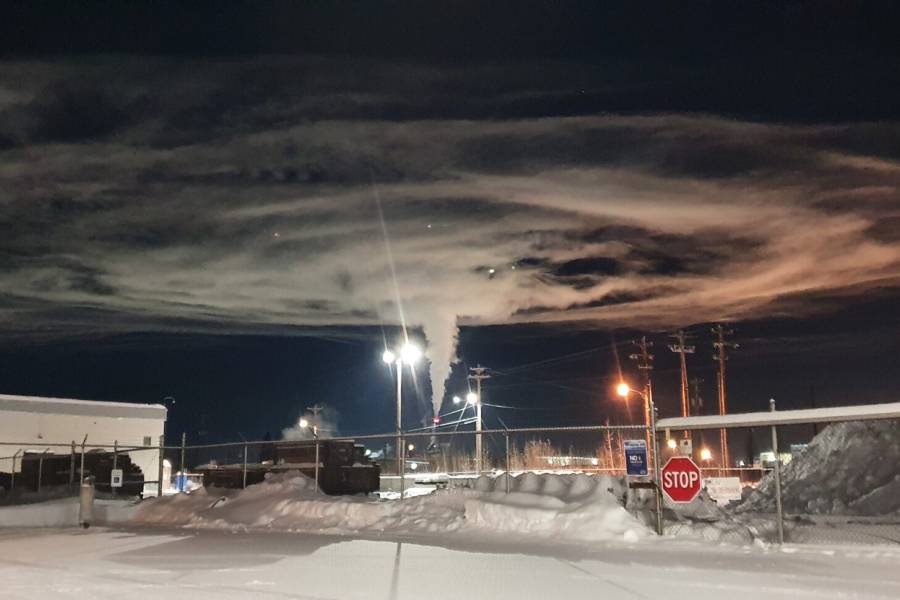 A breath of fresh air

Fairbanks, Alaska, home of breathtaking auroras and scenic mountain vistas, also has some of the worst air quality in the country. A team of Johns Hopkins researchers are part of an international study to find out why.

It was 2 a.m. in Fairbanks, Alaska, and Peter DeCarlo hadn't overcome his jet lag yet.

With the forecast promising good conditions, he donned layer upon layer of clothing under a heavy winter coat to face the subzero nighttime temperatures awaiting him outside. Walking to an empty field near his hotel, he looked up. Brilliant green hues danced in the clear night sky above him, complemented by thousands of sparkling stars.

It's an awe-inspiring sight to take in, the aurora borealis, and DeCarlo was grateful for the experience. But it wasn't why he was in Alaska. 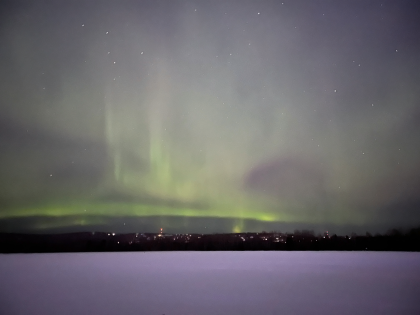 Image caption: The Aurora Borealis, as seen from Creamer's Field in Fairbanks

Fairbanks has consistently high wintertime air pollution levels, often ranking among the worst air quality locations in the country. The atmospheric science community—including DeCarlo, an associate professor of environmental health and engineering at Johns Hopkins University—often focuses on summertime air quality issues in the United States and elsewhere. In these places, increased temperatures and sunlight drive chemistry in the atmosphere that produces higher ozone and particulate matter levels. But in Fairbanks, and in other Arctic cities, dangerous air quality levels are instead driven by bitter temperatures and pollutants. A multidisciplinary team of engineers and scientists has embarked on a research mission to understand why.

The Alaskan Layered Pollution and Chemical Analysis, or ALPACA, project involves more than 40 researchers, including DeCarlo's research group, from more than 15 national and international universities working with the University of Alaska Fairbanks to investigate the types of pollutants in the air, their impact on air quality, and what causes the pollutants to be trapped in the Arctic atmosphere. The seven-week study is funded by the National Science Foundation, the National Oceanic and Atmospheric Administration, and other international funding agencies.

In most parts of the country, air quality improves as temperatures decrease. In Fairbanks, when temperatures dip to extreme lows, some residents need to supplement their primary home heating with additional heating such as wood stoves and pellet stoves, causing an increased pollution burden during the winters. That burden is amplified by peculiarities in the region's meteorology and atmospheric chemistry. Because of the limited hours of sunlight in the winter, the photochemical reactions that can reduce atmospheric pollution are very limited in Fairbanks, DeCarlo says. Additionally, when sunlight heats the earth and surface-level air, pollution in the atmosphere is normally diluted by the natural convection and air movement that occurs. That mixed air then rises to a level in the atmosphere called the boundary layer. In areas outside of the Arctic, that boundary level can be a few thousand feet or higher, but in Fairbanks, the boundary layer is much closer to the ground—in a case illustrated by one ALPACA test site, just the height of a few stories of a building—creating less space for air to circulate and pollutants to dissipate. Located in a river valley without much wind and a low boundary layer, the city's air pollution builds up to dangerous levels.

"A lot of the manifestations of climate change are happening at an accelerated rate in Arctic areas. Understanding the situation now allows us to see what might be happening in the future, and try to prepare for some of those changes as well."
Peter DeCarlo
Associate professor of environmental health and engineering

Ellis Robinson, a postdoctoral researcher in DeCarlo's lab who visited Fairbanks for the study, says these conditions result in "pooled stagnant air" around the city.

Robinson is working in a house the team rented in a suburb of Fairbanks to serve as a test site for the study. With a variety of instruments in the house, the team had to make a few adjustments for their project (with full cooperation from the owner), including rewiring the house's electrical system for greater capacity. Their instruments are primarily located in the garage, so they outfitted a fake door with holes for ventilation and for routing their instruments outdoors, allowing them to measure the outdoor air quality from the relative comfort of the garage.

Each researcher is responsible for at least one instrument, and Robinson's main focus is the aerosol mass spectrometer, or AMS. The instrument can identify the chemical composition of atmospheric particles minute-by-minute, offering powerful insights into daily air quality levels. For example, a car might drive by the testing site, producing a burst of emissions for a short period of time that the AMS can measure. Different sources of particles have unique chemical fingerprints, and the compositional measurements of the AMS can distinguish between particle types, providing key information about their source and the relative contribution of each particle type to the overall atmospheric air pollution levels. Ultimately, this information can be used by policymakers to regulate the causes of pollution based on the prevalence of their emissions.

Day 4 of #ALPACA22:
This is what you do when you need to put a bunch of sampling lines through a garage door but the owner of the house doesn't want you to ruin theirs. Obviously I helped a ton. pic.twitter.com/CX0VwG2JRp

Beyond the scientific questions the team has, they're also interested in the air pollution's effect on those who live in Fairbanks. In an open house webinar introducing the project to the public on Feb. 3, the team heard from residents who described their experiences with the extraordinary levels of pollution in the city. Liz Greig, a resident who works in downtown Fairbanks, rode a bus the morning of the webinar. She said that when she exited the bus, she removed her face mask, which she wore to prevent the spread of COVID-19. But she put it right back on after a moment because of the noticeable, pungent smell in the air. Bill Simpson, project leader and professor at University of Alaska Fairbanks, said the air quality level had been elevated that morning—and had been for the past several days.

Those dayslong stretches of poor air quality are of particular concern for future generations, as resident Mike Craft noted when he thanked the team for their work on the project. He's lived in the area for 41 years and has six grandchildren, whose health he worries about as air quality continues to be a problem.

A key question among residents is the correlation between indoor and outdoor air quality. DeCarlo says this is an important aspect to the project, as most people in Fairbanks spend the majority of their time indoors during the winter. When it's -30 degrees Fahrenheit outside and 65 degrees inside, that stark temperature difference can change the composition of particulates and gases between indoor and outdoor spaces, DeCarlo says. The larger scientific team at the house is studying what happens when the outdoor air—including pollution particles and gases—gets inside. The team is also interested in how regular indoor activities, such as cooking and running a pellet stove, can increase emissions in the outdoor air quality, as well as how those emissions affect the indoor air quality of the test house overall.

All of these measurements and data will be used to improve the characterization of air pollution issues in Fairbanks, and potentially help to regulate future emissions in the area. While Fairbanks is an interesting case study, the results of the study can also apply to other Arctic areas.

"A lot of the manifestations of climate change are happening at an accelerated rate in Arctic areas," DeCarlo says. "Understanding the situation now allows us to see what might be happening in the future and try to prepare for some of those changes as well."

For Robinson, who is from Pittsburgh, where air quality is also known to be a problem, the field research represents a new professional opportunity.

"All of my air quality work has been done in Pittsburgh, or a place like Pittsburgh," Robinson says. "It's been interesting to have to really step outside of that and interpret patterns and data in a way that's different from the framework I'm used to." 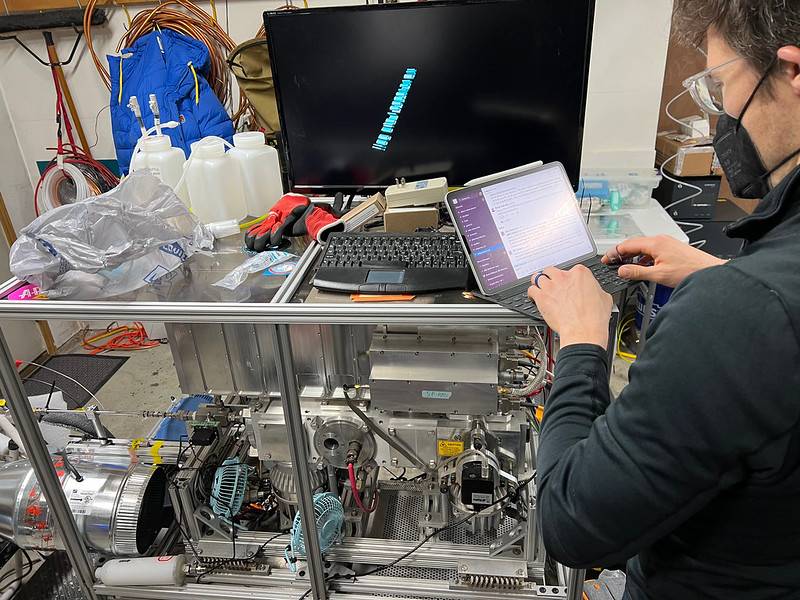 While the ALPACA project has been in place for several years, this current study was initially supposed to take place in January 2021. The year delay offered opportunities for further planning, DeCarlo says, but it also put everyone who had been hired for the study in a holding pattern. When they began planning for a January 2022 start date, they felt excited, but the rise of the omicron variant of the coronavirus threatened to postpone the study once again.

Facing a "go, no-go" decision in November 2021, DeCarlo says the team put safety protocols in place, and everyone was able to get to Fairbanks safely. Because of the protocols, however, the researchers have limited interactions together. When they are together, they're masked and conducting experiments. Simpson, the project leader from the University of Alaska Fairbanks, says this is an essential operations decision for the project; each researcher is the expert for their instrument, and if they were to get sick, there would be a significant loss of important data collection during the time-sensitive study.

Because it's so cold outside (as DeCarlo discovered when he went for a walk and icicles formed on his eyelashes), the researchers don't have many opportunities to gather outside, either. Instead, Robinson has taken up his dream of cross-country skiing, which he rarely gets to do when he is home. Now, he says, he can walk right outside to participate in the activity he enjoys.

Although the camaraderie between researchers isn't quite the same on this project as it would be in non-pandemic times, DeCarlo says that gaining experience is typically one of the best aspects of conducting field research, which he's felt firsthand. Two of the other researchers on the project, Kerri Pratt at the University of Michigan and Brent Williams at Washington University in St. Louis, were part of a similar air quality project with DeCarlo in Riverside, California, in 2005. He describes the experience of working with them 17 years ago as students, to now training their own students together, as an "evolution of the generation that is cool to see."

Over the coming weeks, the team will work to ensure calibrated and quality-assured results, which should be available in about six months, as the minute-to-minute measurements offer a substantial amount of data to sift through.

The team has plans for a data meeting over the summer to analyze preliminary results, where DeCarlo hopes the team can make up for some of their lost camaraderie—and do so in much warmer weather.