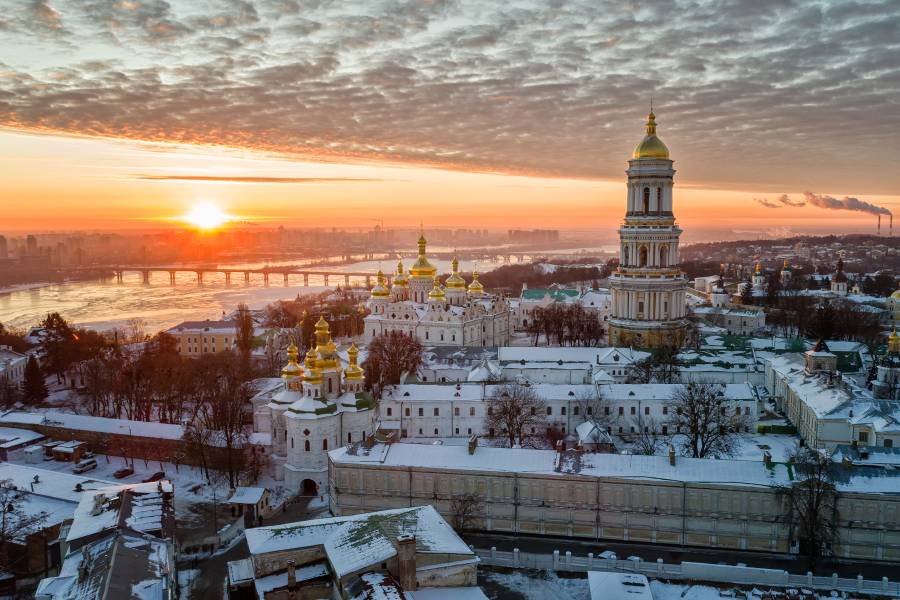 The world woke up Thursday morning to the news that Russia had invaded Ukraine after weeks of failed attempts at diplomacy with Russian President Vladimir Putin. As rocket attacks reportedly took place in and around the capital city, Kyiv, and Ukrainians fled their country, the rest of the world watched an invasion unfold on European soil the likes of which hasn't been seen since World War II.

What happens next in Ukraine has implications for democracy's survival around the world, according to Anne Applebaum and Yascha Mounk, both senior fellows at Johns Hopkins University's SNF Agora Institute and longtime contributors to The Atlantic, where they both shared their insights on the situation.

"In the centuries-long struggle between autocracy and democracy, between dictatorship and freedom, Ukraine is now the front line—and our front line too," wrote Applebaum, a staff writer at The Atlantic. Amid ample news coverage about what Putin might hope to achieve, Applebaum's essay provides historical context for Ukraine's interests, what it means to be Ukrainian, and how the country's desire for democracy threatens Russia's aims:

Ukraine is now under brutal attack, with tens of thousands of Russian troops moving through its eastern provinces, along its northern border and its southern coast. For like the Russian czars before him—like Stalin, like Lenin—Putin also perceives Ukrainianness as a threat. Not a military threat, but an ideological threat. Ukraine's determination to become a democracy is a genuine challenge to Putin's nostalgic, imperial political project: the creation of an autocratic kleptocracy, in which he is all-powerful, within something approximating the old Soviet empire. Ukraine undermines this project just by existing as an independent state. By striving for something better, for freedom and prosperity, Ukraine becomes a dangerous rival. For if Ukraine were to succeed in its decades-long push for democracy, the rule of law and European integration, then Russians might ask: Why not us?

On Thursday, in the hours after the invasion began, Mounk, a contributing editor at The Atlantic, wrote that Putin had finally stopped pretending there was a diplomatic solution to the standoff in Ukraine, signaling that "Putin no longer intends to let even the most basic international norms—like the prohibition on territorial conquest by military means—limit his ambitions." The move, Mounk wrote, harkens "the beginning of a new era of naked power politics," and that democratic nations are losing their grip, citing a new Freedom House report on the state of democracy in the world.

In 2021, the number of countries moving away from democracy once again exceeded the number of countries moving toward it by a big margin. Democratic institutions and civil rights deteriorated in 60 countries, with Afghanistan, Nicaragua, Tunisia, and Sudan experiencing especially precipitous declines. At the beginning of the democratic recession, about half of the world's population lived in a country classified as "free." Now only two out of every 10 people do, while four in 10 live in "partly free" nations like India, and another four in 10 live in "unfree" nations like Saudi Arabia…As Russian troops advance toward Kyiv, democracy is no longer the only game on the global stage. And so the coming decades won't just pit democracies against autocracies in key territorial battlegrounds like Ukraine. They will also pit the defenders of democracy against those who blatantly reject the supposed decadence of popular self-determination in the sphere of ideas.

Mounk warns that dictators around the world are beginning to unmask, revealing authoritarian tendencies and unleashing enormous military strength to meet imperial goals. The challenge, he writes, is that "many democracies are now rife with acrid divisions and face domestic challenges to their stability," complicating the international response to such strong-arm tactics. Still, as Applebaum writes about Ukraine, there are people around the world "willing to dedicate their lives to fighting corruption, to deepening democracy, to remain sovereign and free."

As the clash over global democracy intensifies, the stakes could not be higher.