The child, Eve McLennan, was born with critical aortic stenosis and had a life-saving surgery at two weeks old 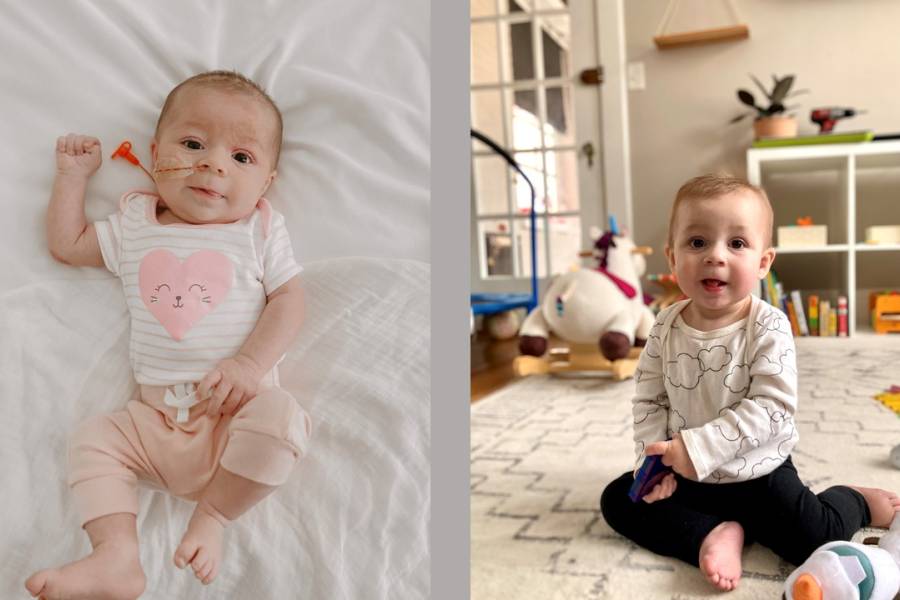 Credit: Courtesy of the McLennan family

When Eve McLennan was born one year ago, her parents didn't expect that she would be "asleep" for the first month of her life.

Eve's mother, Laura McLennan, had what she and her husband, Will, considered a typical pregnancy. "Everything checked out as normal on the ultrasounds and anatomy scans," Laura McLennan, who lives in Catonsville, Maryland, recalls. But when Eve arrived at 41 weeks in January 2021, her care team noticed her oxygen levels were low, and she was taken to the neonatal intensive care unit. The team performed an echocardiogram, an ultrasound to assess the heart's function and structures, which revealed an unknown abnormality with Eve's heart. Just hours after she was born, Eve was transferred to Johns Hopkins Children's Center for more advanced heart care.

Once there, Eve's deteriorating condition required her to be placed on a ventilator. She was diagnosed with critical aortic stenosis, a narrowing of the aortic valve opening that restricts the blood flow from the left ventricle, the largest heart chamber, to the aorta, the main artery that carries blood away from the heart to the rest of the body. Doctors attempted to open the aortic valve through a less invasive catheterization procedure, which helped open the valve slightly but not enough for normal blood flow. Because of Eve's condition, scar tissue had developed in her left ventricle, causing enough damage that cardiac surgeon Bret Mettler, director of pediatric cardiac surgery and co-director of the Blalock-Taussig-Thomas Pediatric and Congenital Heart Center at the Children's Center, spoke with the family about the potential of Eve receiving a left ventricular assist device, or LVAD, a mechanical pump implanted inside her chest to help her heart pump blood. He also informed them she could eventually need a heart transplant.

"That was the scariest time of our lives. It was pretty traumatic," McLennan recalls.

Before moving forward with the LVAD, Mettler decided to give Eve time to see if her condition improved. "The blood in Eve's heart was pumping through what looked like a tiny pinhole in her aorta," Mettler says. "But with every echocardiogram, her blood flow started to increase, so an LVAD wasn't necessary, but she still had a long way to go." A second balloon catheterization procedure was performed, but didn't fully open her aortic valve. Mettler decided it was time for an open-heart procedure to fully correct Eve's heart.

On Feb. 15, at a little over two weeks old, Eve underwent surgery. "We knew she was in good hands, so we felt very at peace," McLennan says. "I knew she was in the best possible care." After nine hours in surgery, Mettler told the family the procedure was a "home run." "During Eve's surgery, we were able to successfully replace her damaged aortic valve with her pulmonary valve, and then replace her pulmonary valve with a conduit, so her heart could reach its full capability," Mettler says. "I was really happy with how well everything went."

With her heart doing well, Eve was removed from the ventilator about a week and a half after surgery. She had been medically sedated from the time her heart condition was discovered shortly after her birth, and her family was finally able to see Eve wake up for the first time since then. "It was pretty incredible," McLennan remembers. The care team then began reducing the amount of oxygen and pain medication Eve received. She left the hospital on April 13, after transitioning from a feeding tube to bottle feeding.

McLennan says throughout Eve's short life, "she just needed time to show everyone that she was strong enough and she could do it. She did everything on her own time. She let people know if she wasn't ready."

Eve continues to have regular checkups with pediatric cardiologist William Ravekes, medical director of the pediatric heart transplant and mechanical circulatory support program. She will likely need to have one or two additional open-heart procedures to replace the pulmonary valve conduit as she grows.

McLennan says Eve had a slight gross motor delay that quickly resolved with physical therapy. But she says Eve is a "healthy, normal baby" with a "fun, silly personality, adding that she loves music, eating, bath time and playing peek-a-boo. "Eve was asleep for the first month of her life, and now she's perfectly fine, active and growing," McLennan says. "She's a little miracle."