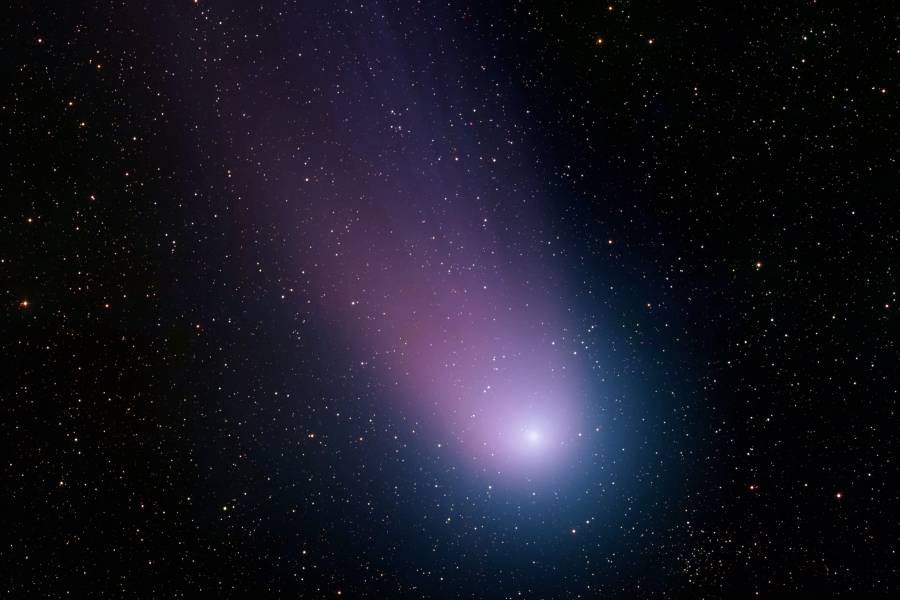 More than a decade ago, a NASA spacecraft intentionally blasted a crater into the moon's surface, throwing a cloud of ice and volatiles that had likely been trapped there for billions of years into space. Now, a new analysis of the elemental abundances of that cloud suggests that impacting comets deposited those volatiles from less than 1 billion years ago to as many as 3.5 billion years ago. It adds another piece to the puzzle of the moon's (and Earth's) history and underscores how lunar ices and volatiles can shed light on the past.

The study, led by planetary scientist Kathleen Mandt at the Johns Hopkins Applied Physics Laboratory, was published Feb. 8 in the journal Nature Communications.

"For decades, we thought there were no volatiles on the moon whatsoever, because it was very dry," said Olivier Mousis, a planetary scientist from Aix-Marseille University in France and a study co-author.

The prevailing theory that the moon formed from a Mars-sized object that hit the primordial Earth suggests most water should have burned off from the collision. Dehydrated lunar rocks returned from the Apollo missions set the stage for this idea, Mousis explained.

"Understanding the impact history of the moon—and the delivery of volatiles to it—helps deduce what Earth has experienced in the last 1-2 billion years."
Kathleen Mandt
Planetary scientist, Johns Hopkins Applied Physics Laboratory

Recent investigations have shown that the Apollo rocks actually do contain a sparse amount of water within them. However, more hard-hitting have been observations of water ice in craters at the Moon's poles that never receive direct sunlight, called permanently shaded regions or PSRs.

First discovered in 1994 by NASA's Clementine mission and later confirmed by several other missions, this water ice lies in the regolith, or dirt, that covers the surface of the moon to depths of several meters. But how it and other volatiles molecules got there—whether by external sources, such as asteroids and comets, or internal ones such as outgassing from volcanoes—has remained an open question.

Mandt saw a way to probe the question using data collected from NASA's Lunar Crater Observation and Sensing Satellite (LCROSS) mission, which intentionally created a crater in a PSR back in 2009.

The 2.2-ton upper stage of the Atlas V rocket that launched LCROSS slammed about 62 miles from the lunar south pole into the moon's Cabeus crater at 5,600 miles per hour, creating a plume that even Earth-based telescopes could see. High above, NASA's Lunar Reconnaissance Orbiter (LRO), which was already orbiting the Moon, swooped by just 30 seconds after the impact, collecting data to determine the molecular composition of the resultant plume. LCROSS, on the other hand, was on the same collision course, flying head-on into the plume and sampling the chemicals for four minutes to determine the plume's composition until finally crashing into the surface.

So, Mandt and a team of collaborators decided to try a new approach to solve the problem. They compared the elemental composition of the LCROSS plume with five potential sources: volcanoes, comets, asteroids, micrometeoroids, and the Sun's ever-present solar wind of charged particles, which can chemically react to create water at the moon's surface.

Using a computational model, the team evaluated whether a combination of sources potentially would match the LCROSS observations of lunar volatiles. But after 164,000 different combinations failed to result in the measured amounts LCROSS detected, the team had to consider processes that would subdivide the elements from the time of their delivery to the moon and their eventual trapping in the PSRs. The result was just one source that best fit the data: comets—the water-rich, icy dirtballs from the nether regions of the solar system.

This result presents an interesting piece of the history of not just the moon but of Earth as well.

"Understanding the impact history of the moon—and the delivery of volatiles to it—helps deduce what Earth has experienced in the last 1-2 billion years," Mandt said. Given that Earth's surface is constantly recycled through plate tectonics and weathering, much of that early history is either scarce or completely gone. But on the moon, where volatiles stored in the regolith can remain unchanged for billions of years, that history is still preserved.

Lunar volatiles are a lot like the ice sheets in the Arctic and Greenland, which capture a history of Earth's water and atmosphere, Mandt added. "The volatiles of permanently shadowed regions preserve a history of the Earth-moon system that will be lost if we use them for human exploration without first characterizing them."

With increased interest in establishing permanent human bases on the moon (by as soon as 2027, in the case of China) and eventually using the lunar surface as a launch pad to even farther destinations such as Mars, the Moon's ice and volatiles could provide an important resource for rocket fuel, industry, and life support for resident astronauts.

"I'm not against exploration, but I also don't want to miss this only opportunity to study these ancient ices," Mandt said. "We need to have scientists working alongside people developing the instrument and ice utilization tools. This will allow us to strike a balance between the science returns and human exploration of the future."