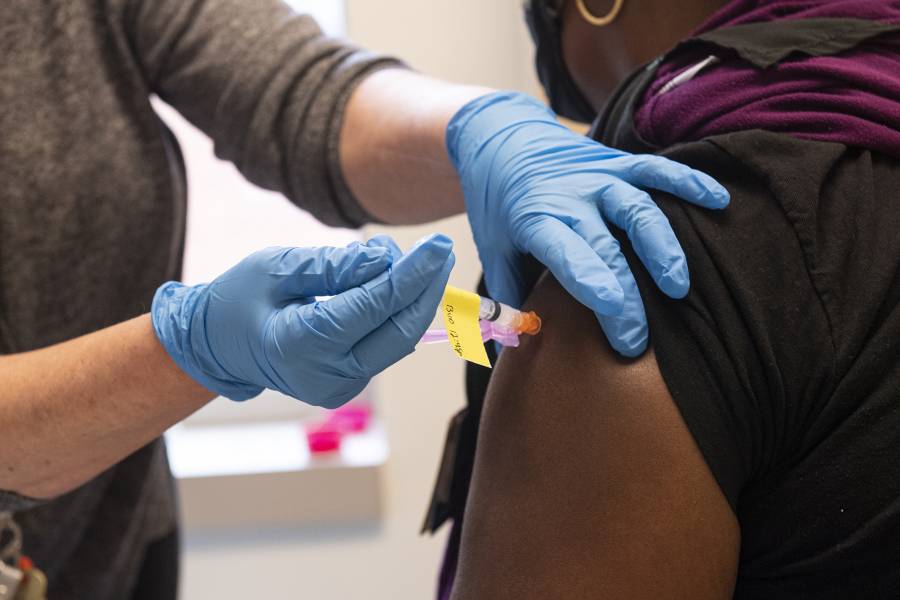 Yes, you should get a booster

From preventing COVID-19 altogether to lessening symptoms and transmission with breakthrough infections, there are several important reasons to get an mRNA booster ASAP

COVID-19's omicron variant is causing infection rates to skyrocket in the United States. Health care workers are at their breaking point, households are in quarantine mode, and some schools are temporarily shifting to virtual learning.

In many ways, January 2022 feels a lot like March 2020. And yet there is hope: The U.S. is in a much better place right now in terms of severity of disease and death rates thanks to today's readily available mRNA vaccines and boosters. That good news could be even better if more people get booster shots, says Chris Beyrer, Desmond M. Tutu Professor of Public Health and Human Rights at the Johns Hopkins Bloomberg School of Public Health.

"We're only at about 35% of Americans who are eligible for a booster having gotten one, so we need to do way better," Beyrer says. "We need to get many, many more people boosted. And we have enough vaccine to do that."

There's no doubt that vaccines and boosters are saving lives and improving outcomes for people who are up-to-date on their series of vaccinations: In general, a boosted person with a breakthrough COVID-19 infection will experience less intense symptoms, is sick for a shorter period of time, is less likely to be hospitalized, and is less likely to pass on the virus to others, even to those living in the same household, Beyrer says. The Hub talked to Beyrer about the how the benefits of boosters outweigh possible side effects and how a booster given here in the U.S. won't hinder efforts to vaccinate the world.

I'm already fully vaccinated. Why do I need a booster?

There are several really important reasons to get a booster. The first is that we now know that immunity even from full immunization does wane over time and the booster dramatically increases the immune response more than five fold over two doses of mRNA vaccines or one dose of J&J. The second reason is that people who are boosted and have breakthrough infections have shorter periods of being infectious and that protects the other people around them as well. And it's also important in households because it turns out that boosted people in households where the adults are boosted and the adolescents are boosted, they significantly lessen household transmission. So that really matters. For example, if people have children under five at home who are not eligible for vaccines or if they have vulnerable seniors at home or somebody who is immunocompromised, boosting helps us reduce our risk of transmitting to others, so boosting really matters for that, too.

One of the issues that is behind why omicron is so infectious and is so effectively being transmitted—including in populations where there's higher rates of vaccination than the United States—is that it does have some ability to evade the immune response. So it's very important to be boosted because we really want to have maximum protection against the virus and reduce its transmission. Boosting does play a role there.

Am I going to need to keep getting boosters?

It depends on a number of factors and certainly one of them is if there are more variants of concern emerge that we may need specific boosting for.

Some might be wondering whether they should just let themselves get omicron because it's not so bad, and then they've got some more immunity?

Well, there are several problems with that thinking. First of all, we do know from several countries now where there's good data on this that natural immunity from a previous COVID-19 infection also faded over time. It also wanes and it does not provide as robust protection.

The second reason why we're concerned about that kind of thinking is because we really don't know, for example, what long COVID is going to look like after omicron—obviously we haven't been able to see that yet because it's only been circulating for such a short time. So what we're seeing for many people with long COVID is really lasting neurologic deficits, including something that looks like chronic fatigue syndrome, memory issues, and this so-called brain fog. This is not the kind of thing that anybody wants. There are now at this point hundreds of thousands of people suffering from this syndrome and we still don't really know very well how to treat it or what to do with it. There's no approved therapy for it. So that is a real concern. That's another reason why you really want to avoid this infection if you can [by being vaccinated and boosted].

A year into giving out vaccines, what do we know so far about their long-term effects?

Virtually all of the side effects that we have seen with the vaccines are acute, meaning they happen right around the time of injection—allergic reaction or arm pain or soreness, muscle fatigue. The only longer-term ones are within a matter of weeks. And that we have seen, for example, with the J&J vaccine, this rare, but very real bleeding and blood-clotting complication called vaccine induced thrombotic thrombocytepenia. And that's why the FDA is no longer encouraging the use of the J&J vaccine if you have access to mRNA vaccines. It's rare, but it's real. In terms of the other longer-term complications we have a year out, we really haven't seen any. But obviously we're still monitoring all the people who were in those original trials, who are being followed for a full two years. The trials were mostly conducted in late 2020 and early 2021. So those people are still under observation.

What about myocarditis? What do the studies show about its relationship to COVID-19 vaccinations?

Well, there's no question that there has been this association after the mRNA vaccines, particularly Pfizer, which is the one we have the first data on because it was the first to get approval for emergency use authorization. Myocarditis is more common in males and it is more common in young males than adolescents. However, it is exceedingly rare and it has mostly been very transient. So there have been a few people hospitalized, almost everyone has fully recovered. As far as we know, there's only one confirmed death after billions of people [receiving the mRNA vaccines]. So it is real, but it is very rare.

On the other hand, COVID-19 itself does produce myocarditis and it can be much more severe myocarditis and pericarditis. It's more common with the disease—somewhere between 10 and a hundred times more common with the disease than it is for vaccinations. And there have been a number of deaths related to the cardiac complications of COVID-19 itself. So if a parent is worried about myocarditis, vaccination is much safer than not vaccinating your kid and the likelihood that they may get myocarditis from COVID is significantly higher than they would get it from a vaccine.

When I get a booster here in the U.S., am I keeping someone in the developing world from getting their first dose of a vaccine? Am I hindering the international effort to vaccinate less fortunate countries?

No. It's really not the way vaccine distribution works. The U.S. has a significant stockpile right now of mRNA vaccines. So we really have sufficient vaccine to boost the American population. We're only at about 35% of Americans who are eligible for a booster having gotten one, so we need to do way better. We need to get many, many more people boosted. And we have enough vaccine to do that. In the meantime, the vaccine access issues for the rest of the world—which were very acute in the first year of the pandemic and even into the fall—are improving. There is much more vaccine available. The Johnson and Johnson vaccine is widely available and being used in Africa. It has shown good protection against delta and omicron with a booster dose in the South African study. So that's really very encouraging. And the best thinking is that there will be enough vaccine for everybody in the world who wants it probably by May or June of 2022. The logistical challenges of getting those vaccines into people's arms and into the lowest income countries and the unstable and fragile countries are going to be enormous. Nobody should underestimate that, but vaccine supply won't be a problem probably for more than the next six months, assuming that the manufacturing meets its projected targets.

The U.S. has authorized but is not explicitly recommending mixing and matching right now. But the WHO is following this very closely because so many countries started with one vaccine and then had to change. So their populations have no true way to avoid mixing and matching. This happened in South Africa, where they started with the AstraZeneca vaccine and then it turned out that AstraZeneca was not effective against the beta variant. So they stopped that and switched to J&J. So there's lots of data on people who had one dose of AstraZeneca and one dose of mRNA—that's true in many countries. So the WHO has been analyzing those data and it looks like mixing and matching of vaccines is safe and it increases immune response. That's something to pay attention to, but for right now, we're recommending that people get boosted with the vaccine that they started with.

Is one mRNA vaccine better than the other?

Moderna is the vaccine that has the longest persistence of immune response. But the Pfizer and Moderna vaccines are very similar. The difference is that Moderna was given in a larger dose and that probably matters. And it was given a month apart as opposed to three weeks apart with Pfizer and that may also be important. We don't really know why, but it does appear that immunity wanes slightly more quickly with Pfizer. Either mRNA vaccine is preferred over the J&J vaccine for all adults, especially women of reproductive age. Myocarditis is more common in men and boys, but the vaccine-induced thrombotic thrombocytopenia—or clotting and hemorrhaging—[with J&J] is more common in women under 50. 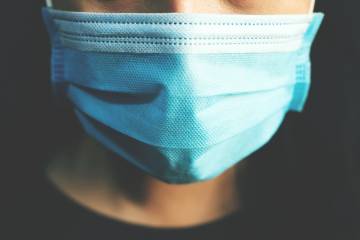 Published Dec 15, 2021
Epidemiologist Chris Beyrer suggests that in addition to sharing effective vaccines around the world, basic practices such as masking and providing paid sick leave will help reduce the spread of coronavirus / Barron's 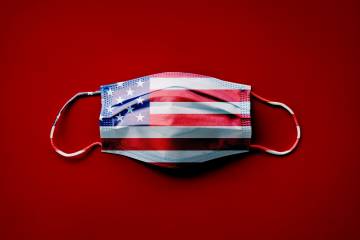 Wearing a mask protects you and those around you

Published Aug 24, 2020
New research co-led by a Johns Hopkins researcher suggests face coverings reduce viral exposure, limiting both transmission and severe disease. But is that evidence enough to turn the tide of public opinion now that masks have become politicized?