Motion detection devices such as those found in your cellphone could be useful in predicting outcomes for patients who have suffered severe brain injury, a team of Johns Hopkins clinicians and engineers has found.

The current approach for evaluating responsiveness in patients with SBI relies primarily on bedside physical examination, which is prone to error, as patients are often struggling with impaired or fluctuating levels of consciousness.

To improve the accuracy of these predictions, clinicians at the Johns Hopkins School of Medicine and engineers at the Whiting School of Engineering conducted a study in which they placed wearable accelerometers on the ankles, elbows, and wrists of SBI patients admitted to the Johns Hopkins Hospital Neuroscience Critical Care Unit. The devices recorded motor signals which were found to be correlated with levels of patient consciousness and might help doctors predict each patient's recovery trajectory. The results recently appeared in Nature Scientific Reports.

"The neurological condition of severely brain-injured patients is primarily expressed through different types of movement or, to be more precise, different motor responses. Our results suggest that continuously analyzing data from these motion-detector devices could inform clinicians in real time about their patients' condition and be indicative of short-term outcomes," said Robert D. Stevens, associate professor of anesthesiology and critical care medicine, neurology, radiology at the School of Medicine, who is also the project's principal investigator. "One of our goals for future studies is to test how the data and information provided by the motion sensors could be integrated into clinical workflows and inform treatment decisions." 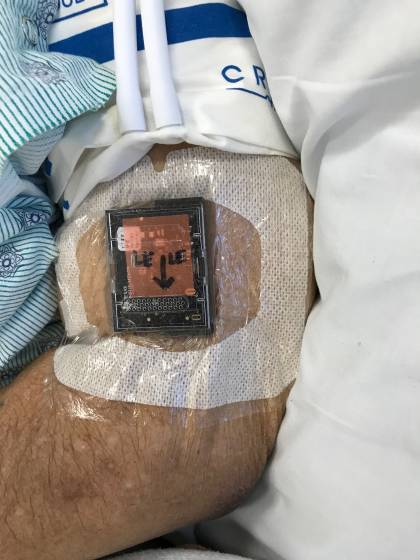 This research utilized Texas Instruments' SensorTags, 2.25-ounce square devices about the size of an Apple Watch face, which were attached to both patients and their beds to determine motion not initiated by the patient, such as a patient being moved to a different room. When patients moved, the motion-induced sensor signals were mathematically transformed by artificial intelligence to yield information indicative of the probability of a patient being capable of purposeful movement, such as following a basic command, and the probability of a patient recovering with moderate disability or better at the time of discharge from the hospital.

Though previous studies examined the use of motion-sensors to track physical activity in the ICU, this is the first to explore the relationship between accelerometry and clinical variables specific to SBI patients.

"The main results are that accelerometry-based features can detect SBI patients capable of purposeful movement, predicting which of them will recover with, at most, moderate disability," said study lead author Shubhayu Bhattacharyay, a 2020 JHU graduate in biomedical engineering and applied mathematics and statistics who is currently a PhD candidate in Clinical Neurosciences at the University of Cambridge.

Next, the researchers plan to develop a new wearable sensor array that will measure patients' biological signals, such as muscle activation, heart rate, and respiration rate, in addition to detecting movement.

"The inclusion and integration of these data streams will allow for more accurate tracking of neurological development in patients who have experienced SBI," said John Rattray, a PhD candidate in the Department of Electrical and Computer Engineering. "With the insights we gained from this study, our next step will be to better assist doctors and nurses with actionable data on neurological progression they previously haven't had access to and additionally provide them a tool that is easily deployed and integrated into the clinical space."

Another key team member was Ralph Etienne-Cummings, a professor in the Whiting School of Engineering's ECE department, who referred to the project as "exactly the type of collaboration and translation involving engineering, medicine and society that is a unique trademark of Hopkins."