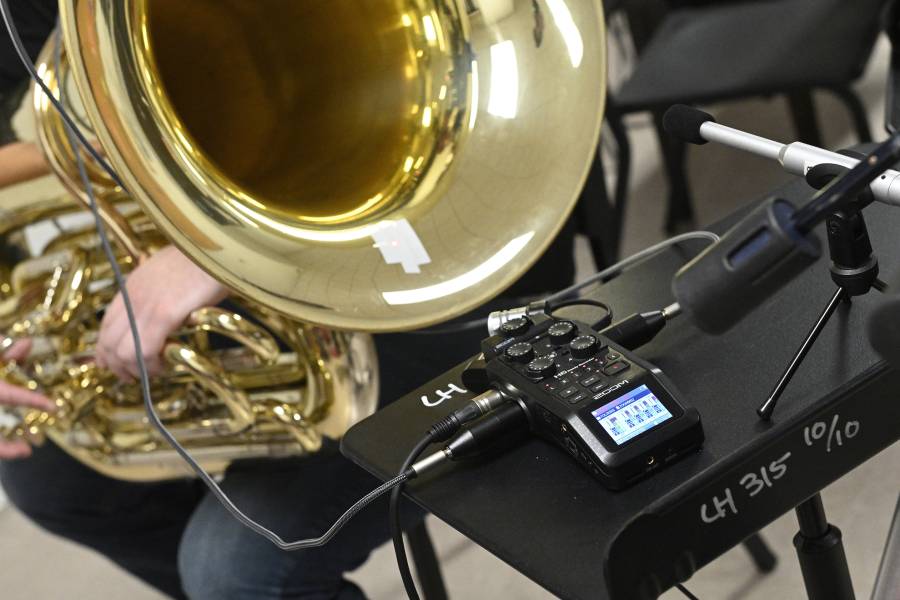 The science of the sound of music

A group of students at the Peabody Institute gathered every Monday night this semester to learn the science of musical acoustics from two unorthodox teachers: a pair of doctoral candidates from the Whiting School of Engineering's Department of Electrical and Computer Engineering.

Neither Ian McLane nor Valerie Rennoll is a professional musician, but their research focuses on improving the capture and analysis of sounds. The two are part of a team that created Hearo, an award-winning acoustic sensor that can screen out extraneous noise and focus in on certain sounds. This technology has a myriad of potential uses, from allowing bands to record their music almost anywhere to use in wearable sensors that record patient vital signs and send them to clinicians.

As a result of the class, both engineering teachers and music students are learning more about their disciplines by collaborating with people who approach acoustics from different vantage points.

"It has been really interesting getting a different perspective," said Sam Kartub, a master's student in Acoustics who is taking the course. "Having hard-science engineers talking about this kind of stuff, this class has been a little more technical than other courses, which is something that I have enjoyed. It has been cool having this course so grounded in a quantitative kind of science." 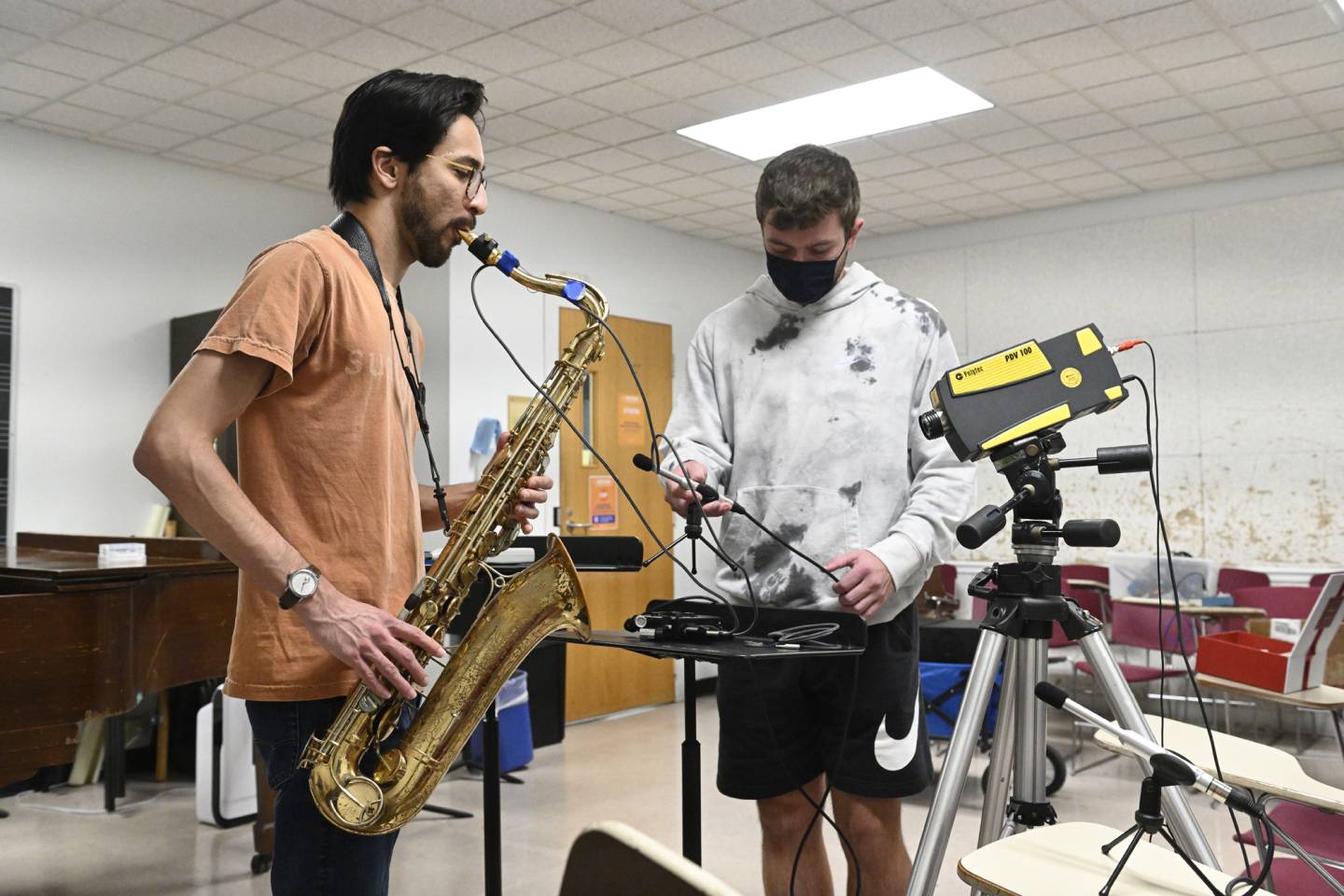 Though this three-credit course, a requirement for both recording arts and acoustics majors, isn't new, this is McLane and Rennoll's first time teaching it. The class educates students on the physics of sound as applied to properties of musical instruments, how sounds are perceived, and electronic music reproduction.

"With the saxophone, it's the air column that's vibrating and the body is resonating with it, but that isn't where the sound is coming from. So, we are really curious about what effect the placement of Hearo will have on the recordings."
Sam Kartub
Student, Peabody

So far this semester, the duo has focused on how instruments and different instrument families work: for instance, what vibrates to create specific sounds. An early assignment involved students providing an in-depth presentation about a certain instrument, focusing specifically on the physics of how they create sound and what makes the instrument unique. McLane and Rennoll have also used their engineering backgrounds to introduce engineering concepts relevant to the course content, such as signal processing: a subfield of electrical engineering that focuses on analyzing, modifying, and synthesizing signals such as sound, images, and scientific measurements.

"Something I want to emphasize is current research, having the students read current articles from places like Acoustical Society of America and then think about how it applies to their world," Rennoll said. "I think it's a good way to emphasize one of the crucial skills for an engineer, which is critical thinking."

Ian Hoffman, an assistant professor in the acoustics program at Peabody, says the class that McLane and Rennoll are teaching exemplifies the interdisciplinary nature of the institute's recording arts and acoustics programs.

"Not only do these programs engage students and faculty from across music, engineering, physics, hearing science and architecture disciplines, but they also bridge the technical and computational aspects of sound with critical listening, aesthetics and human perception of sound," he said, pointing out that this approach fosters collaboration and shared interest in content, research, and teaching from schools across Hopkins. 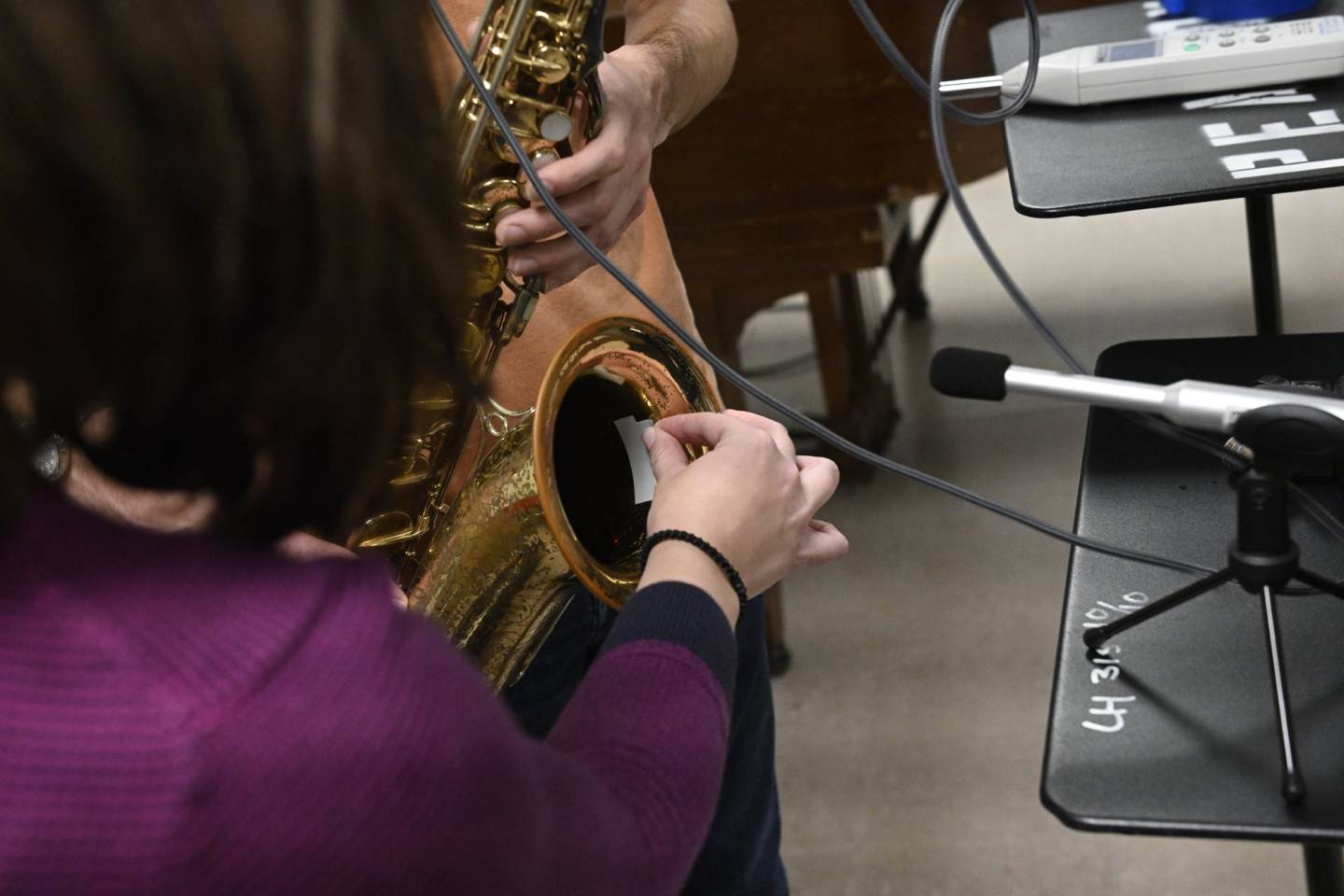 The course's final project involves Hearo, the acoustic sensor created by McLane, Rennoll, and fellow ECE doctoral candidate, Adebayo Eisape. For the project, pairs of students are using both Hearo and an ordinary condenser microphone to record various musical instruments in a variety of settings, such as a completely silent room or one with lots of background noise blaring. The groups will then use both qualitative and quantitative methods to compare the recordings.

A major difference between Hearo and the two traditional microphones is their placement during recording: Hearo must be attached to instruments, while the other captures airborne sound.

Kartub, whose group is using the saxophone for its project, thinks that Hearo could perform well compared to a traditional microphone in noisy settings because it touches the instrument, and therefore could be able to hone in on its vibrations more effectively.

"With the saxophone, it's the air column that's vibrating and the body is resonating with it, but that isn't where the sound is coming from. So, we are really curious about what effect the placement of Hearo will have on the recordings," Kartub said. "I also want to see how it does with different notes. Low notes go all the way through the saxophone, so the end is resonating a lot more, versus high notes where the air kind of leaves at the top of the saxophone, so the end isn't resonating as much. Even with non-contact mics, that plays a role, so I'm excited to see how Hearo does with it."

Once McLane and Rennoll have all the recordings from the project, they plan to write a paper focused on their version of the "Coke vs. Pepsi" challenge: having people listen to recordings conducted by both Hearo and the other microphones, and choosing which are clearer. That study and paper will mark the end of an experience that both students and teachers say has been rewarding.

"It has been a really interesting experience because it has been us teaching them more about the engineering perspectives on acoustics, but then they can tell us how the music world would approach certain problems, too," McLane said. "I know for Valerie and I, it has been really exciting to get that different perspective on what we're working on and how Hearo could work in their world."