In an ongoing global survey, more than half of those who are unvaccinated in more than 50 countries indicated in August that they definitely or probably won't get a COVID-19 vaccine. A new dashboard, launched today by the Johns Hopkins Center for Communication Programs, unpacks that survey data to help explain why—and how experts can work to increase acceptance rates.

The researchers found that the primary reasons around the world for resisting vaccination include fears about side effects, a desire to wait until more people have had the shots so they know they are safe, and a lack of confidence in whether the vaccine really works.

"Our analysis of this large trove of data finds that while vaccine hesitancy is real, there are many people around the globe who can be encouraged to get their doses—if public health officials can build and share their messages to address their concerns."
Dominick Shattuck
Johns Hopkins Center for Communication Programs

These latest survey results, based on responses gathered between Aug. 16 and 31, can be found in the new COVID Behaviors dashboard, an interactive tool created with data collected from more than 12 million people from 115 countries. The survey—believed to be the world's largest daily survey of global COVID knowledge, attitudes, and practices—has been fielded every day since May 20, 2021. It is expected to continue until the end of this year, and new data will become available every two weeks.

The dashboard is intended to be used by policymakers, government officials, and public health practitioners at national and sub-national levels to better understand the behavioral drivers behind vaccine uptake, masking, and physical distancing that can prevent the spread of COVID-19.

"Our analysis of this large trove of data finds that while vaccine hesitancy is real, there are many people around the globe who can be encouraged to get their doses—if public health officials can build and share their messages to address their concerns," says Dominick Shattuck, CCP's director of monitoring evaluation and learning and one of the leaders of the COVID behaviors project.

Adds Marla Shaivitz, CCP's director of digital strategy: "The dashboard can be used as a roadmap for policymakers to identify and engage with citizens to encourage them to be vaccinated to protect themselves and their families from COVID-19. In many countries, this dashboard fills an important data gap. It offers the most comprehensive data some governments have access to on how COVID behaviors are changing and what they can do to intervene."

The dashboard is the product of a collaboration among CCP, the World Health Organization's Global Outbreak Alert and Response Network, and Facebook. The data are generated from the COVID-19 Trends and Impact Survey, which is administered in the United States by the Delphi Group at Carnegie Mellon University and in other countries by the University of Maryland Social Data Science Center. The two universities collect the survey data from a random sample of Facebook users and CCP analyzes the responses.

A previous COVID behaviors dashboard, also led by CCP, was based on smaller, less frequent surveys from June 2020 through March 2021. 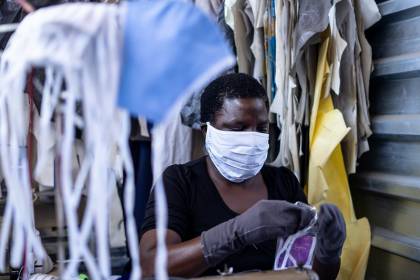 Image caption: A woman works in a face mask manufacturing shop in a factory in Harare, Zimbabwe.

In this latest survey, reasons for vaccine hesitancy vary by country. In Senegal, the two most common reasons for hesitancy are concerns about side effects and whether the vaccine will work. Education around vaccine science and side effects could work to encourage vaccine uptake in Senegal. In the Netherlands, however, unvaccinated respondents were most likely to say that they don't believe they need a vaccine. When asked why not, their main reasons were because they are not a member of a high-risk group, or they don't believe COVID-19 is a serious illness. Each underlying perception requires a different messaging response.

The dashboard sheds light on how other behaviors have evolved over the last four months as well. In the United States, for example, 65% of those who responded to the survey between Aug. 16 and 31 said they had been shopping indoors in the previous 24 hours, and two-thirds those who had been shopping said they wore masks. Mask wearing steadily decreased in the U.S. until the middle of July but has been rising since the highly transmissible Delta variant became the dominant strain, and case counts and hospitalizations began rising again to record levels in many states.

In India, where an outbreak has fallen from its May peak, only 29% of respondents had been shopping indoors in the previous 24 hours and the vast majority of them (87%) were wearing masks, suggesting there is a long way to go before things get back to normal.

USAID has sent more than 110 million doses to low- and middle-income countries and COVAX, a worldwide initiative aimed at equitable access to COVID-19 vaccines, has distributed more than 236 million doses. As vaccine access increases, governments will need to develop strategies to sensitize citizens to accurate information and the benefits of vaccines.

In addition to findings about vaccine hesitancy, the dashboard also features data on why many people who want vaccines can't seem to access them. In Brazil, for example, where 65% of the unvaccinated respondents in the Aug. 16-31 survey period said they probably or definitely want a vaccine, 23% of those who want one said they couldn't get a shot because they are not eligible for one, and 34% said there were no appointments available.

Armed with knowledge from the dashboard, officials in those countries can aim to work with local communities to make vaccine appointments more accessible—once vaccines are widely available—and to better spread the word about appointments that are available and when, where, and how to secure them.

"We are at a critical time for global COVID-19 vaccine rollouts, yet populations are oversaturated with information, disinformation, and rumors," says Jeni Stolow of WHO's Global Outbreak Alert and Response Network. "Continuously producing timely evidence-based and effective health communication is a major challenge in this second year of the pandemic. This dashboard can support public health practitioners around the globe in their endeavors to tailor, target, and reinvigorate their local COVID-19 vaccine outreach efforts."

While many unvaccinated people around the world say they are unlikely to get vaccinated, in many countries, large percentages of the population say they would choose to get their children vaccinated once a vaccine becomes available. In India and Guatemala, well over 90% of survey respondents said they would definitely or probably vaccinate their children. Data from Aug. 16 through 31 show the figure was 86% in Mozambique, 72% in the United States, and 47% in Serbia.

"The volume of data that has and will continue to be collected on COVID-19 will be of great value to policymakers and health practitioners, if the data are strategically used," says Douglas Storey, CCP's director for communication science and research. "This dashboard offers deep insights into behaviors around the world and will be a guide for those aiming to stop the spread of this devastating disease."

CCP will host a webinar about the new dashboard with experts from the center and WHO's Global Outbreak Alert and Response Network on Tuesday, Sept. 21, at 9:30 a.m. EST. Advance registration is recommended.