Sarah Szanton—a prominent gerontologist, expert in health equity and social justice, and alumna and longtime faculty member of the Johns Hopkins School of Nursing—has been appointed as the next Hopkins Nursing dean. Her term will begin Aug. 25. 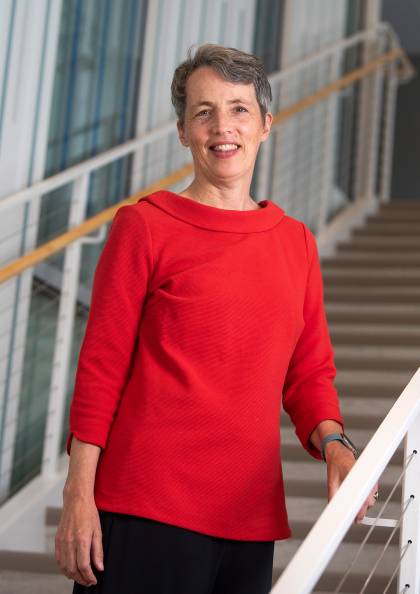 Originally a member of the School of Nursing Dean Search Committee, Szanton stepped down after the committee decided that in addition to a strong pool of external candidates, talented individuals from within the school should be considered. Szanton went through the same interview process with university leaders as other finalists for the position.

She succeeds Patricia Davidson, who served as dean of the School of Nursing from 2013 to 2021, when she was named vice-chancellor of the University of Wollongong in her native Australia. Longtime nursing Executive Dean Marie Nolan has served as interim dean since Davidson's departure in April.

"Last winter, we charged the School of Nursing Dean Search Committee to undertake a comprehensive international search for a leader who would continue to build on the school's preeminence in education, research, and practice among the nation's top schools of nursing," university President Ron Daniels and Provost Sunil Kumar wrote in a message announcing Szanton's appointment. "Ultimately, that search led us to one of our own."

Added Daniels in a letter recommending Szanton to the Executive Committee of the university's board of trustees: "Based on Sarah's career of outstanding academic and professional accomplishments, the work of our search committee, and our personal interactions, I am confident in Sarah's ability to assume this critical leadership position at the university."

Szanton, who joined the Johns Hopkins faculty in 2007 as an assistant professor and was promoted to full professor in 2017, has devoted her career to researching low-cost interventions that make it easier for older adults to remain safe and healthy in their homes as they age. She co-developed the visionary CAPABLE program, which addresses health disparities in older adults by providing handyman services in combination with nursing and occupational therapy to improve mobility and reduce health care costs, and she has been instrumental in building the program's team and expanding its work from Baltimore City to more than 40 sites.

Throughout her career, Szanton has been deeply committed to advancing diversity, equity, and inclusion initiatives at the School of Nursing and in the nursing profession more broadly. She has a record of promoting health equity, social justice, and antiracism in her research, mentorship, and education, and a broad body of research investigating structural racial discrimination and the social determinants of health. Szanton is well respected within the nursing profession for her ability to secure research grants and turn those funds into real-world applications to improve the health and well-being of patients.

"I am thrilled to work with all communities of the Johns Hopkins School of Nursing to drive population health and well-being" Szanton said. "This is a boundless time to be a nurse, and I am lucky to have the opportunity to succeed Trish Davidson in being dean of the best nursing school in the country."

Szanton currently serves as the inaugural Patricia M. Davidson Health Equity and Social Justice Endowed Professor at the school and directs its Center on Innovative Care in Aging. She previously directed the school's PhD program, chaired the Doctor of Philosophy Board, and directed three academic centers concurrently, managing multi-million-dollar budgets and programming. Szanton also has a joint faculty appointment in the Department of Health Policy and Management in the Bloomberg School of Public Health.

After receiving a bachelor of arts in African American studies from Harvard University, Szanton received a bachelor of science in nursing from Hopkins Nursing, where she would also go on to receive a PhD in nursing science after attending the University of Maryland for her master's degree. She has published extensively in peer-reviewed journals and received many awards for her work.

"We are delighted that Sarah has agreed to serve our university in this critical leadership position," Daniels and Kumar wrote. "Please join us in congratulating her and welcoming her to her new role."