Davidson, who has led the Johns Hopkins School of Nursing since 2013, will return to Australia to assume leadership role at her alma mater

Patricia Davidson, a global leader in cardiac health and the care of vulnerable populations who has served as dean of the Johns Hopkins University School of Nursing since 2013, will leave the university in April to become vice-chancellor of the University of Wollongong in her native Australia.

Davidson, who earned her bachelor's and master's degrees in education from Wollongong, becomes the first woman and first alumna to serve as vice-chancellor of UOW, a public research university located on Australia's east coast, about 50 miles south of Sydney. She will begin her new role on May 1. 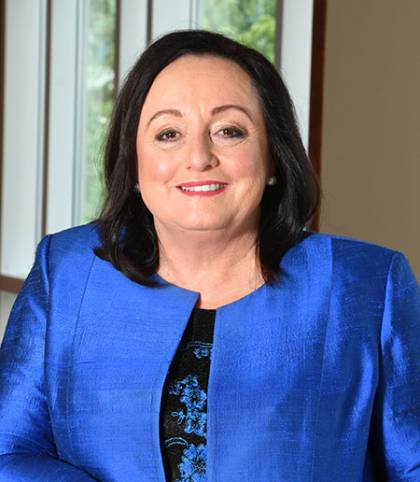 "We will miss her deeply as a leader and a champion for Hopkins nurses, knowing we are stronger for the impact she has made on the school and the Johns Hopkins community," Johns Hopkins University President Ronald J. Daniels and Provost Sunil Kumar wrote in a message to the Hopkins community today. "We congratulate her on this important appointment to lead an emerging and vibrant university in Australia.

"Trish leaves the School of Nursing poised to build on its excellent foundation and ready to play a leading role in international nursing for years to come."

Davidson, who spent 23 years as a frontline clinician and nurse manager before shifting her focus to research and teaching, became the fourth dean in the School of Nursing's history in September 2013. During her tenure, the school has remained one of the world's premier destinations for nursing education and is ranked No. 1 for nursing graduate programs by U.S. News and World Report.

Details on a search for Davidson's successor will be shared at a later date, Daniels and Kumar said.

"Starting my career in Wollongong, Australia, in the late '70s, I would have never dreamt that I would have had the opportunity to be the dean of the Johns Hopkins School of Nursing," Davidson said. "My time at Johns Hopkins has exceeded my expectations; I have grown professionally and personally, and I have had the chance to work with the brightest and the best faculty, staff, and students.

"I will sorely miss Baltimore and my many friends and will always be a passionate advocate for the university and the values that guide our work. I am so thankful for the trust placed in me to lead this exceptional school."

"We will miss her deeply as a leader and a champion for Hopkins nurses, knowing we are stronger for the impact she has made on the school and the Johns Hopkins community."
Ronald J. Daniels
President, Johns Hopkins University

Davidson has strengthened the School of Nursing's commitment to research, increasing scholarly publications by 15% and sponsored submissions by 51%. She has also deepened the school's commitment of alums, donors, friends, and foundations through an ambitious fundraising agenda—one manifestation of which is the opening of a renovated and reimagined School of Nursing building later this year.

Davidson will continue to serve through the spring as co-chair of the Johns Hopkins Roadmap 2020 Task Force, a group charged with examining and renewing the goals of the JHU Roadmap on Diversity and Inclusion and deepening the institution's efforts to advance equity and access.

Davidson will become Wollongong's fifth vice-chancellor since it became an independent university in 1975, replacing Paul Wellings, who has served in the role since 2012. She was selected for her higher education leadership experience, her depth of knowledge in the health sciences, and her commitment to diversity and inclusion, according to a UOW news release.

"Professor Davidson has been described by her Hopkins colleagues as being truly transformative in taking Hopkins Nursing to a higher level," UOW Chancellor Jillian Broadbent said. "She brings passion, energy, knowledge and leadership together with strong financial disciplines."

Davidson, who earned a PhD in behavioral science from the University of Newcastle in Australia in addition to her Wollongong degrees, has co-authored more than 500 peer-reviewed journal articles and 29 book chapters. She is secretary general of the Secretariat of the World Health Organizations Collaborating Centers for Nursing and Midwifery, counsel general of the International Council on Women's Health Issues, a member of Sigma Theta Tau International's Institute for Global Healthcare Leadership Advisory Board, and a board member of the Consortium of Universities for Global Health. She also serves on the Board on Health Care Services for the National Academies of Sciences, Engineering, and Medicine.

Throughout her career, Davidson has focused on mentoring the next generation of health professionals and scientists, and in 2016 she earned the Australian Museum Eureka Prize for Outstanding Mentor of Young Researchers, the most prestigious research mentorship award in Australia.