Sarah Szanton spent years as a nurse practitioner calling on low-income elderly patients in West Baltimore. She tells the story of a 101-year-old patient living in a public housing high-rise. The woman could not read, could not walk, and—having outlasted her friends in the building—was afraid of her neighbors. She would roll her wheelchair to the threshold of her kitchen, then have to crawl on her hands and knees to get food out of her refrigerator. Szanton got her moved to an apartment that had no steps to navigate and was outfitted with assistive devices like pull bars in the bathroom. Now the woman could move easily and safely from bathroom to kitchen to bedroom—tasks that used to take her hours. She could eat meals at regular intervals to keep her blood sugar in check. "Within weeks, we took her off her diabetes and hypertension drugs," Szanton says. "It was clear that living in a safe, predictable place was responsible for her improvement."

Her experience with such house calls led Szanton, now an associate professor in the School of Nursing, to craft a program she calls CAPABLE—or Community Aging in Place, Advancing Better Living for Elders. A team composed of a nurse, an occupational therapist, and a handyman visits low-income elderly, checking not just their vital signs and mobility but also for home environment details like handrails and smooth flooring. For an older person, Szanton says, not being able to navigate stairs or safely use a bathroom can be as disabling as disease.

One of her program's goals is to save Medicare costs by allowing more elderly to stay in their homes as long as they can, avoiding expensive hospital admissions, readmissions, and nursing home stays. "The innovation," she says, "is that we're using health care dollars to invest in housing, in order to save health care costs."

The team begins each case by asking patients to identify their priorities. One person might care most about getting to church on Sundays; another might want to walk up and down the stairs in his house. Based on the patient's responses, the nurse and occupational therapist can then work on strength and balance issues; the handyman might install a ramp or handrail or devices to help clients put their socks on or rise from a chair. "In medical care, we don't usually ask people what they want," Szanton says. "It's very motivating when you set your own goals."

CAPABLE is in the first year of a federally funded three-year trial. Szanton projects the $4 million grant will generate a savings of $6 million in reduced hospital stays and nursing home admissions. If that proves out, CAPABLE will be offered nationally to all Medicaid recipients under a provision of the Affordable Care Act in which any pilot program shown to save Medicaid costs is adopted as federal policy. Szanton sees promising early signs, such as a drop in depression symptoms "as much as any anti-depression prescription." She calculates total costs for CAPABLE at $3,300 per participant for four months, including up to $1,200 in home repairs. "Thirty-five hundred dollars is the average cost for two weeks in a nursing home, and about one-fifth the cost of an average hospitalization," she says. "So we're saving money if we just keep someone out of a nursing home for two weeks." 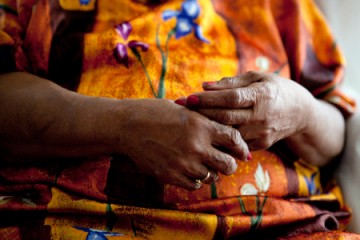