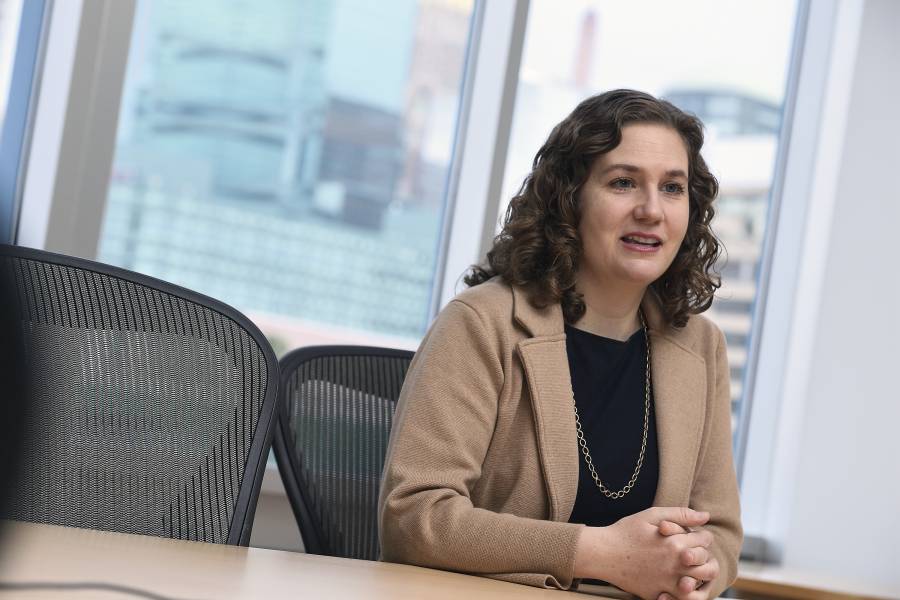 With the daily pace of vaccinations declining, infections caused by the highly contagious Delta variant rising, and a new wave of misinformation about vaccine side effects gaining traction, it's going to take a lot of people having a lot of delicate conversations with skeptical friends and family to continue moving the needle on vaccine-derived herd immunity, says Johns Hopkins University epidemiologist Jennifer Nuzzo.

COVID-19 myth-busting is Nuzzo's mission. She has spent the entire pandemic fighting the spread of deadly disinformation by talking to as many people as she can, wherever they are, about their virus and vaccine concerns. Her outreach has included numerous TV appearances, chats in parenting groups on social media, conversations with strangers while wearing a T-shirt saying "Johns Hopkins epidemiologist/Ask me vaccine questions," and serving as an unpaid adviser to moviemaker Sacha Baron Cohen, the mastermind behind the Borat movies.

We can't short circuit the process of winning hearts and minds. If we don't do a good job of connecting with people and addressing their concerns and fears, we're ultimately not going to get where we need to be.
Jennifer Nuzzo
Johns Hopkins Center for Health Security

The problem, she says, isn't that vaccine skeptics aren't informed, but that they are informed by disreputable sources with a vested interest in spreading misinformation. "If you put outrageous things out there, they'll travel further than the truth because it's more engaging and the more engagement [anti-vaxers] have online, the more money they make," Nuzzo says.

Nuzzo has a slew of academic credentials to help the cause. She is a senior scholar at the Johns Hopkins Center for Health Security and an associate professor in the Department of Environmental Health and Engineering and the Department of Epidemiology. But she says job titles and advanced degrees are not required for the rest of us to do our part.

"Those of us with knowledge have, I think, a moral responsibility to try to share it in as many venues as possible," Nuzzo says. "There are so many resources available at the university. Imagine if all of us made an effort to try to have these conversations with our friends, neighbors, anyone."

With that in mind, the Hub talked to Nuzzo about her Hollywood-based outreach as an adviser to Borat Subsequent Moviefilm and its related documentary series, Borat's American Lockdown & Debunking Borat. We also sought her guidance on how to talk to someone who might need more facts to make informed decisions surrounding COVID-19 and its vaccines. The takeaway, Nuzzo says, is to focus on empathy and keep in mind that it's a conversation, not necessarily a conflict.

"Just try to hear people out and hear what their concerns are," she says. "And try to empathize with them a little bit. The fears that they're expressing come from somewhere. So the first step is just checking yourself and what baggage you bring to these conversations—I think that's an eye-opening experience regardless."

Working with Sacha Baron Cohen is a slam dunk in terms of reaching a wide audience. In episode two of the Debunking Borat documentary series, you talked to Jim and Jerry about whether there were microchips in the vaccines, and you made me feel instantly empathetic for them.

People who are wary about vaccines aren't necessarily uninformed. Chances are they have done a lot of research about vaccines. It's just that the information they've gotten is not the right information. When it comes to sorting through the wrong information versus the right information, it's not only like a skill that you gained from education and experience but also access. So they see lies, they see stuff on the internet, they just see snippets of it and that makes up their worldview. It's really unfortunate, but that's why I think it's really important for us to not make anything a tribal fight, especially when it comes to vaccines.

I think we also have to acknowledge that these vaccines are new. Several of them use a new technology that we've never used before in the vaccines we're used to. The whole campaign to develop them was called Operation Warp Speed, so [skeptics] think it was developed in haste. And it's a new virus. There's a whole lot of newness. I don't think we should expect people to not have fear and not have concerns. And we can't short circuit the process of winning hearts and minds. If we don't do a good job of connecting with people and addressing their concerns and fears, we're ultimately not going to get where we need to be.

How do you talk to people who say they won't get vaccinated because they know too much or that they have done a lot of research?

Do you have advice for people who want to talk to a family member or friend? What are the best strategies?

My approach has just been trial and error and just the hunch of reading people's body language. I say I'm not going to judge anybody, I'm here to provide information. I don't necessarily assume I'm going to change your mind, but I'm going to try to give you more information to help you make your decision. But also, I want to understand what your concerns are because it's actually incredibly helpful for me to hear because I could think, well, if I were worried about that, what would make me change? It helps me continue to refine the message.

With increasing global concerns about the spread of the Delta variant, it's good to see the growth in cases in the UK slowing. This is encouraging and speaks to the power of vaccines.https://t.co/6WarD4JS0N

Sometimes the way to have these conversations is less about trying to hammer people with facts and more about hearing about their fears and giving space to those fears in a nonjudgmental way. And not necessarily trying to convince somebody, but saying, "How can I help you feel better about this? If I told you this, would it matter? Would you want to hear about that?" Just putting the ball a little bit more in their court. I think it's essential that we do that. And I think it's also essential that we have to recognize that we don't all feel the same about these issues. Some of us off the bat believe in the science and believe that when our doctor tells us to do something, we should do it. Part of that is coming from a place of privilege. Not everybody has been lucky enough to have that experience to make them feel that way. People often say to me, "I just don't know where to go." Sometimes I say, "Well, do you feel like you can talk to your doctor?" Most of them don't have a regular doctor that they see—that's something that's come up a lot in these conversations. So why would you believe that suddenly medicine has a tool for you? So I think we're very quick to judge people, but we don't realize that we haven't all had the same life experiences and we don't all have the same privileges.

These conversations are hard to have. Why should we take the risk? Some people are really conflict averse and avoid addressing difficult subjects with loved ones.

We have to have these conversations, whether it's about vaccines or politics. This country—this world—is not going to do very well unless we have these tough conversations. We can't just isolate ourselves and splinter off into these primal factions and expect everything to work out well. I think it's really important for us to all get out of our comfort zones and to connect with people. And, I have to say, I've honestly found it to be a privilege to be able to do that because it makes me less worried about the world when I talk to people who have different views and I'm able to find common ground with them. They too had a tough year. They too are worried about their families, maybe in slightly different ways. You start to realize, we're all just trying to get up day in and day out and keep moving and putting one foot in front of the other and doing so is hard. We all have our own challenges. And frankly, for me, in this past year, it's been incredibly anxiety producing. But I think what has helped me is to figure out, well, how can I help? And I'm not a clinician—I haven't had to put my life on the line to care for people like so many of my colleagues have—but I know stuff. So if sharing what I know helps people, that just makes me feel a little bit better.