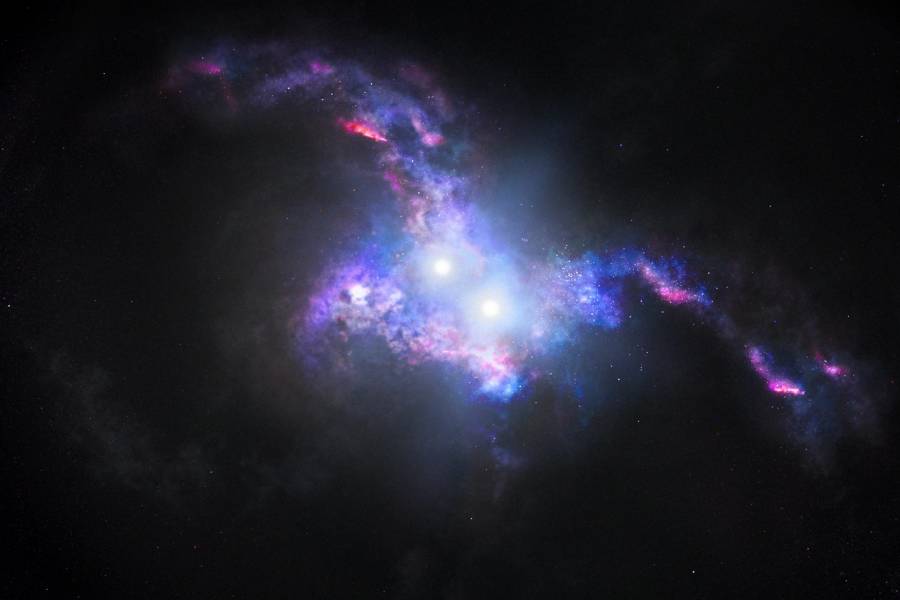 That's because there haven't been many examples to study. Scientists search for supermassive black holes by looking for quasars, the brilliant objects formed when supermassive black holes feed on bits of matter, which emits copious radiation as it falls into the black hole. Most galaxy mergers happened 10 billion years ago, and when looking that far into the past, quasars are scattered widely across the universe. For every thousand quasars, it's estimated there is just one double one. Most quasar pairs known to date are still far apart, and not yet close to the final merging phase. Scanning the skies randomly with even the highest-powered telescope, it could take millennia to find more than a handful of mergers in process.

But a Johns Hopkins/University of Illinois at Urbana-Champaign team devised a way to take the randomness out of the search, and have been rewarded so far by the discovery of two quasar pairs—active about 10 billion years ago. Their work, published in Nature Astronomy earlier this month, should help scientists understand more about galaxy formation and gravitational waves.

"I think this is going to open the floodgates for discovering dual quasars," says team member Nadia Zakamska, associate professor in the Department of Physics and Astronomy in the Johns Hopkins Krieger School of Arts and Sciences.

What makes the team's work revolutionary is the method they used to narrow down the list of possible binary quasars. When two quasars are close enough to indicate a merge in progress, Earth-based telescopes see them as a single source of light, masking their binary nature. But quasars' brightness varies stochastically—it brightens and dims at random—which causes a positional change, or "motion," of the seemingly single source in the sky.

Several years ago, Zakamska and University of Illinois colleague Yue Shen won a grant to explore what clues this phenomenon could offer. What if, they asked, we targeted those quasars whose brightness seemed to jump slightly from one side to the other? In at least some of those cases, they reasoned, the tiny unexpected motion should in fact be caused by the presence of two quasars close together, each brightening and dimming on its own schedule.

Physics and astronomy doctoral candidate Hsiang-Chih Hwang, then in his third year, had been studying binary stars, but joined the binary quasar quest as a side project. To put Zakamska and Shen's idea to the test, he developed an astrometric technique to sift through a catalog of quasars created by the European Space Agency's highly sensitive Gaia space observatory and identify which ones demonstrated that telltale positional shift. He found 150 cases where dual quasars seemed possible. With Hwang taking the lead, the team decided to request time on the Hubble Space Telescope, whose sharp image quality should be able to confirm or refute their candidates. 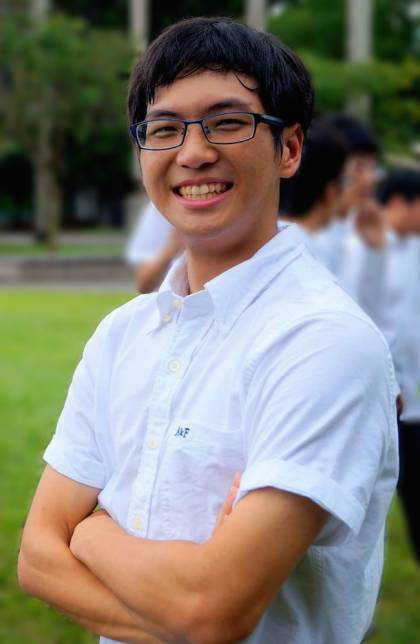 It was a high-risk, high-return venture. Only about 15% of requests for Hubble's time are accepted, and the proposed method was brand-new and untested. But the Hubble peer review panels approved the proposal, and last year, the orbiting telescope began scanning the targets and images began trickling in.

"I was so excited; for me, it's like a lottery. And now we see that the results are indeed very beautiful," says Hwang, who continues to check the Hubble data weekly as new results arrive.

Of the team's first four targets in the early universe, two were found to be binary—a 50% success rate and a huge increase over the 10% success rate of earlier methods.

"Hubble has proven that this method is very efficient and successful. In the future it will enable us to uncover the binary quasars for the entire sky, which is very promising," Hwang says.

Quasars play a key role in galaxy formation, so the additional information from so many binary quasars will help scientists understand galaxy formation in much greater detail, Zakamska and Hwang say. Quasars emit high-intensity radiation that creates strong galactic winds that sweep away gas from the merging galaxies. Without gas, stars do not form, and the galaxies take on an elliptical shape.

The information will also be crucial in the rapidly evolving field of gravitational waves, the researchers say. The frequency of gravitational waves from binary supermassive black holes is too low to be detected by the currently operating Laser Interferometer Gravitational-Wave Observatory. With only a handful of promising methods to detect the waves at the relevant frequency, it's unknown how many wave signals may exist. A large roster of binary quasars will help astrophysicists understand more about how long it takes galaxies to merge, and therefore when and where to expect gravitational waves. And since the merging process takes millions of years, the ability to observe pairs at different points in the process will allow scientists to piece together a timeline of the progression.

While Hubble continues to churn out promising data about the team's 150 candidate pairs, members are also looking ahead to the James Webb Space Telescope, due to begin operating this fall. James Webb is already scheduled to observe some of the team's identified pairs and should be able to confirm that they are in fact merging quasars.

By that time, Hwang, who will defend his dissertation this summer, will be off to a post-doctoral appointment at the Institute for Advanced Study at Princeton, with the experience as a principal investigator of a high-impact Hubble project already under his belt. He plans to continue his focus on binaries—both quasars and stars.

"Hsiang-Chih's contributions have been completely essential to the project because he pushed it forward at two critical points: to get over the big technical hurdle to find good candidates based on their motions, and then again with the Hubble proposal," Zakamska says. 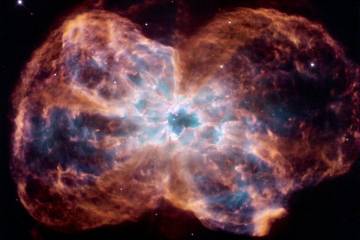 Published July 30, 2020
A team led by students probes the mass-radius relation of white dwarf stars, observing in their data evidence of quantum mechanics and Einstein's theory of general relativity