An enzyme called MARK2 has been identified as a key stress-response switch in cells in a study by researchers at Johns Hopkins Bloomberg School of Public Health. Overactivation of this type of stress response is a possible cause of injury to brain cells in neurodegenerative diseases such as Alzheimer's, Parkinson's, and Amyotrophic Lateral Sclerosis. The discovery will make MARK2 a focus of investigation for its possible role in these diseases, and may ultimately be a target for neurodegenerative disease treatments.

In addition to its potential relevance to neurodegenerative diseases, the finding is an advance in understanding basic cell biology.

The study focused on the cellular response to "proteotoxic" stress—a buildup of damaged or aggregated proteins within the main part of the cell, which is a central feature of neurodegenerative diseases. It has been known that cells respond to this type of stress by reducing their production of new proteins, and that a signaling enzyme likely mediates this response. The researchers, after ruling out other signaling enzymes, were able to show that the signaling enzyme MARK2 has this role.

"Further studies of this previously unrecognized signaling pathway should expand our understanding of protein regulation in cells and the role of this process in the development of human diseases."
Jiou Wang
Professor

"Further studies of this previously unrecognized signaling pathway should expand our understanding of protein regulation in cells and the role of this process in the development of human diseases," says Jiou Wang, a professor in the Department of Biochemistry and Molecular Biology at the Bloomberg School.

Together, Alzheimer's, ALS, and other neurodegenerative disorders afflict well over 50 million people worldwide. To date there is no disease-slowing treatment, let alone a cure, for any of them—primarily because their causes are not well understood.

One possible set of causes of neurodegenerative disorders relates to the proteotoxic stress and the response in brain cells. When this response is activated, reducing protein synthesis, it ideally minimizes the protein burden of the cell under proteotoxic stress, thereby allowing it to recover from the stress. But the long-term reduction of protein synthesis could end up starving the cell of needed proteins, injuring it, and potentially triggering cell death. In other cases, the failure of the proteotoxic stress response, rather than its overactivation, may be the problem, so that protein overload leads to cell injury or death.

Like others in this field, the research team already knew that the molecule at the end of this pathway that switches off protein production is a member of a broad class of signaling enzymes called kinases. They also knew in advance that there are several specific kinases that switch off protein production in the same way, but in response to other types of cellular stress, such as viral infection. The challenge in this study was to find the specific kinase that throws this switch in response to proteotoxic stress in the main part of the cell.

The researchers first identified the kinase MARK2 as one of several candidates for their inquiry by sifting through a large database, produced with prior research, of various kinases and the proteins they potentially act upon. Following up their leads with various cell-free and cell culture experiments, they were able to show that MARK2, and no other candidate kinase, can switch off the protein-making machinery in cells in response to proteotoxic stress, even when the other four known protein-shutdown kinases are absent.

Looking upstream in the signaling pathway, the team found that MARK2 is activated by another signaling kinase, PKCδ, which becomes available for its MARK2-activating role under conditions of proteotoxic stress, thus effectively acting as a proteotoxic stress sensor.

As a preliminary check on the clinical relevance of these findings, the researchers examined a mouse model of familial ALS and samples of spinal cord tissue from human ALS patients. They found evidence that this PKCδ-MARK2 pathway is highly active in these cases compared to non-ALS mice and humans.

"These findings are consistent with the idea that in ALS, for example, this PKCδ-MARK2 pathway is highly active and reducing protein production, which over the long term contributes to the disease process," Wang says.

Having clarified the basics of how this pathway works, Wang and colleagues are now planning to study it in different neurodegenerative disease models to determine whether the pathway could be targeted to treat such diseases.

"I suspect that this PKCδ-MARK2 pathway will ultimately be shown to be relevant not only in neurodegenerative disorders but in many other diseases including cancers," Wang says. 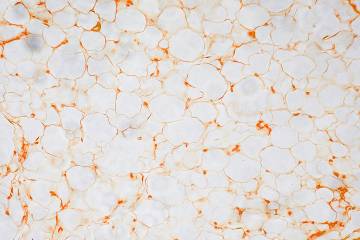 Published Nov 1, 2018
Study raises possibility that problems in cellular metabolism could contribute to illnesses such as ALS, bipolar disorder, and Alzheimer's disease