Vivian Lee, an expert in school counseling, dies at 62

Vivian V. Lee, an associate professor of counseling and human development at the Johns Hopkins School of Education, died May 11. A cause of death was not immediately known.

Lee was a respected educator, researcher, and leader of social justice projects across globe in places such as Ghana, Tibet, Malta, and India. She joined the faculty at Johns Hopkins in 2015 after a much-traveled career in which she taught at the University of Scranton, Old Dominion University, the University of Maryland, and the University of Malta. She also served for a time as a senior director at the National Office for School Counselor Advocacy, a division of the College Board, in Washington, D.C. 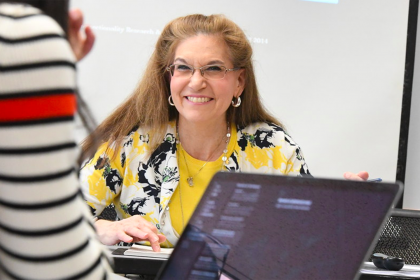 Born Vivian Victoria Thompson on June 15, 1957, in the Bronx, Lee relocated with her family to Willingboro, New Jersey, as a child. Upon graduation, Lee enrolled at Trenton State College and earned a Bachelor of Science degree in health and physical education. She then taught physical education in the Fredericksburg, Virginia, public school system.

Lee was an active and lifelong researcher who published and lectured frequently. Her published book chapters and peer-reviewed papers focused mainly on issues of school counseling and social justice. In 2018, Lee was listed as principal investigator on a $250,000 grant from the Johns Hopkins Alliance for a Healthier World. The grant, a joint study with the Johns Hopkins School of Medicine, was earmarked to investigate the most effective strategies for eliminating tuberculosis in refugee populations in Tibet.

Likewise, Lee served in many high-ranking positions within the counseling profession, both nationally and internationally. She was chair of the International Committee of the American Counseling Association and president of the Maryland Association for Counseling and Development, among other leadership roles.

Among her proudest international contributions was the Bernice-Vivian Library, which she helped raise funds for and build at the Tema Royal Preparatory School in Ghana in West Africa. The library is named in honor of Lee and her co-founder.

It was as a teacher and a mentor, however, that Lee truly excelled. She was a consummate educator, beloved by students and colleagues. Ileana Gonzales was both. She was a doctoral candidate and teaching assistant under Lee at the University of Maryland and then a colleague with her on the faculty at Johns Hopkins in recent years. To Gonzales, Lee was a force to be reckoned with: someone who could at times be demanding, but only because she saw the potential in others and wanted to make it real. Lee was also profoundly compassionate, Gonzales said.

Another student, Aishwarya Nambiar, recalled Lee's maternal nature as both an academic adviser and as a research leader on a recent trip to Dharamshala, India. That trip was part of the grant to study tuberculosis interventions in Tibetan refugees.

"We called her 'Mama Lee,'" Nambiar said. "She was very protective and involved as the lead researcher on that study and but also as an academic adviser. She was always checking in. She was the first to see potential in me that even I didn't recognize. She had a vision for counseling to expand globally and my hope is we can carry that forward."

Fellow mentee, Minjee Kim, accompanied Lee and Nambiar on the trip to Dharamshala and remembers her mentor's deeply personal effect. "She made me feel safe, confident, and worthy," Kim said. "She was very passionate about social justice, empowering her students to stand up for themselves and for others. I will miss her dearly."

Vivian Lee is survived by her husband, Courtland Lee; her brother, Billy; her sisters-in-law Patty, Deidre, and Elva; her brother-in-law, Larry; her goddaughter, Laura; and numerous nieces, nephews, and cousins.

A private mass is planned for Monday, May 18. In lieu of flowers, donations in the name of Vivian Victoria Lee may be made to the American Cancer Society, the American Indian College Fund, and the Tema Royal Preparatory School in Ghana. Colleagues, students, and friends can share memories on the family's Dignity Memorial website. Condolence cards will be collected through May 26 and may be addressed to The Family of Vivian Lee, c/o Dean Morphew, the School of Education, 2800 N. Charles Street, Baltimore, Md. 21218.