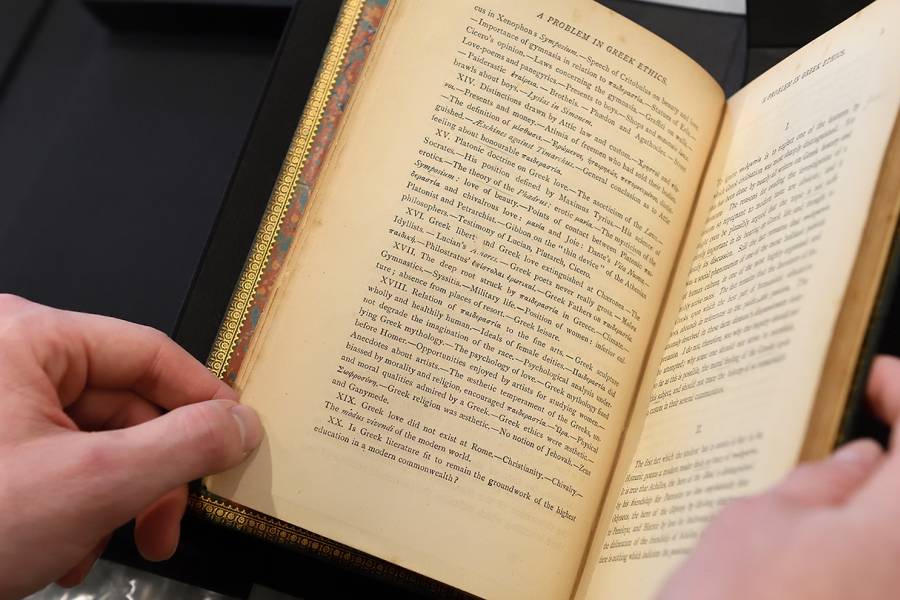 'A Problem in Greek Ethics,' completed around 1873 by poet John Addington Symonds, helped set the stage for the modern gay-rights movement. Until recently, it was believed that only five copies from an original print run of 10 had survived. A sixth copy, secured by Sheridan Libraries curator Gabrielle Dean, plays a starring role in a new campus exhibit about Symonds and his work.

In a Brody Learning Commons classroom, a couple of professors and a handful of students hover around a large black container on a table. Inside the container nestles a slim green volume that no one in the room thought existed until just a few weeks ago and two letters whose connection to the book goes back 125 years.

Over the last semester or two, many of the students have been deeply immersed in the contents of the book, a crucial essay completed around 1873 by the British scholar, literary critic, and poet John Addington Symonds. The first major study in English of ancient Greek sexuality—especially the way relationships between men were both common and celebrated as a perfect embodiment of love—A Problem in Greek Ethics helped set the stage for the modern-day gay rights movement.

But it did so surreptitiously, behind closed doors, as required by the times. Symonds printed it privately in 1883; a print run of just 10 copies reduced the risk that it would fall into the wrong hands. The typesetter complained about the content. Symonds circulated it cautiously, to people he trusted or had reason to think would be discreet. Until now, researchers believed that only five copies survived.

Classicist Shane Butler and curator Gabrielle Dean do the honors, raising the container's lid and carefully unfurling protective layers of bubble wrap to reveal the box containing the book and letters. Dean opens the volume and the students lean in to catch a first glimpse of the yellowing pages and the marginal notes in Symonds' hand.

"Seeing the physical book was an incredible experience, complete with Symonds' handwritten notes, underlines, and cross-outs," says Emma Roalsvig, who is earning her master's degree in Classics. "Holding the physical book from his library, it finally felt like he was a real person and we were going back in time." 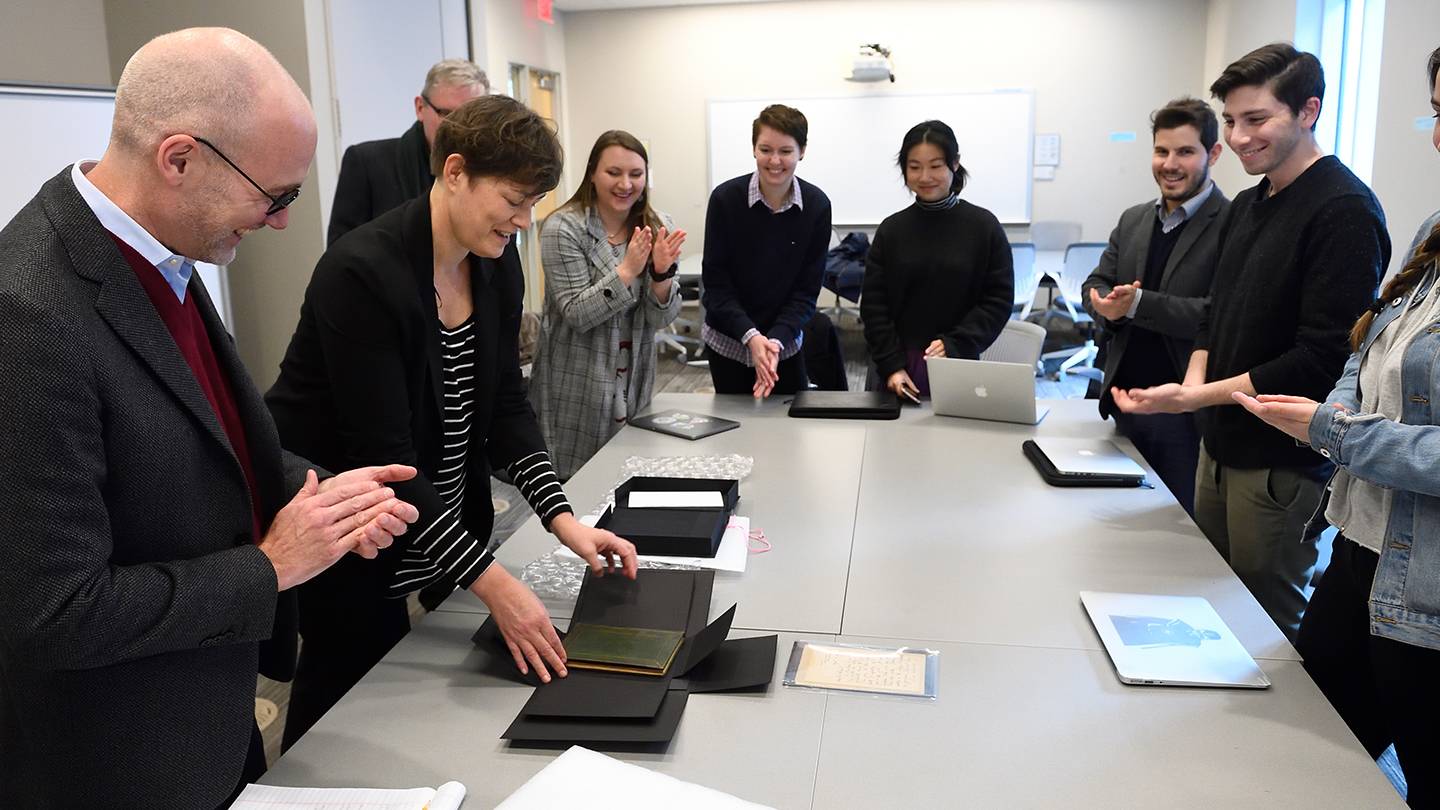 Dean stumbled across this sixth copy, which she believes spent the intervening century in private hands, while Googling examples of Symonds' handwriting to double-check an inscription inside another of his books for an upcoming exhibit about his work. Unexpectedly, up popped an image of a set of letters for sale by a rare book dealer. When Dean clicked the link, she found that included with the letters was a copy of the book itself.

"I was like, Wait, is this even possible?" recalls Dean, who was first certain it must have been an old listing for one of the known five copies. A bit of sleuthing convinced her that it was in fact a current listing for the unfamiliar sixth one. It was a shining moment for the dedicated scholar. "I was trying to check the handwriting to make sure it was Symonds' because you always want to be correct about little facts like that; that's the data of humanities research," Dean says. "I was doing the basic drudgery of scholarship. The research itself can yield stones you have to turn over."

Most of the students in the room, including Roalsvig, are members of the John Addington Symonds Project, the current iteration of an ongoing course called the Classics Research Lab taught by Dean and Butler. Over the past year, students have reconstructed Symonds' library and shared their findings online, offering scholars worldwide a deeper understanding of the ideas Symonds drew on and how he developed the scholarship and innovation he put forward in his prolific writing.

In a mighty coincidence, A Problem in Greek Ethics had been a focal point of the project all year. Using a later edition, the students have been creating a complete, reliable, and proofread version of the groundbreaking text online, and the text was already the planned highlight of the upcoming exhibit, titled "Queer Connections: The Library of John Addington Symonds," that opens today in the Eisenhower Library. Now, it will appear in its starring role in person, accompanied by a letter Symonds wrote to British scholar and explorer Sir Richard Burton when he circulated the volume to him, and the letter Burton sent back three days later. 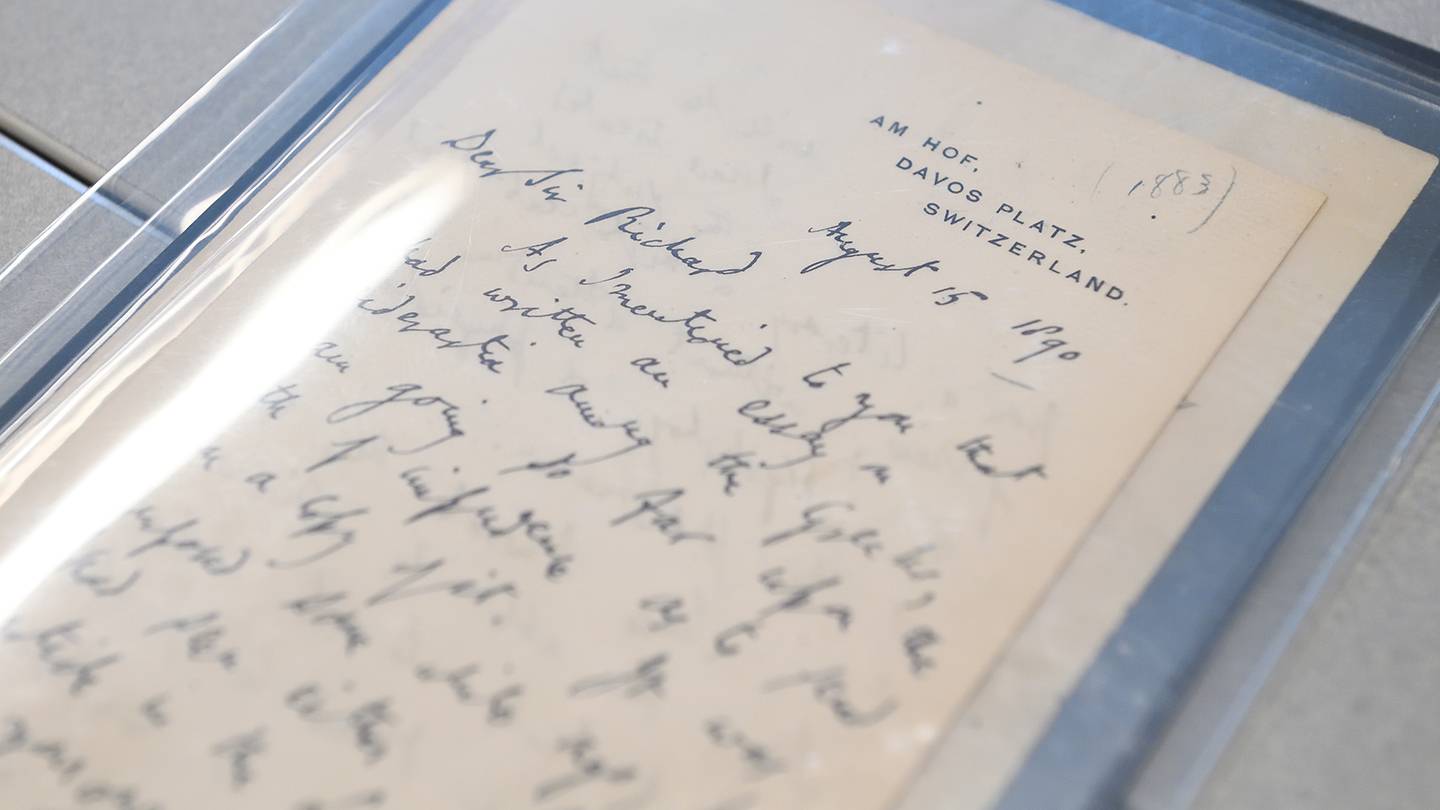 Image caption: Included with the book is a letter written from John Addington Symonds to British scholar and explorer Richard Burton

"The book is a relic from the front lines of some of the first battles over gay rights. It has a kind of sacred character to it," Butler says. "In the lab, we've been trying to understand the actual, real-world economies by which people have connected to each other. This book was part of a complicated technology that brought together a marginalized group of people in a historically incredible way. It does a lot of work as an object."

Acquiring a book by Symonds is nothing new for the Hopkins library, which started buying his works in the 1800s, says Dean, who regularly seeks to build collections by pivotal scholars that offer enduring research value. It made sense to add this rare copy to the library's special collections by the little-known but hugely influential author.

For humanities students, a lab of their own

/ The Chronicle of Higher Education

Dean says the lab project creates a highly unusual collaboration revolving around Symonds and his influence. "This model goes many degrees beyond what an individual can do," Dean says. "It's exponential: It's feeding the library, [Butler's] research, and the students' understanding of empirical research in ways that have real outcomes."

The appearance of the sixth copy of the book—just in time for the exhibit—was an unforeseen but picture-perfect culmination to what had already been an uncommon experience for undergrads.

"Participating in the lab has been a really unique opportunity to collaborate with other students on a research endeavor within the humanities," says senior Katherine Logan, a Writing Seminars major and member of the class. "It was special to see the work of the previous semester's members, as well as the efforts of those of us working on the project this year, lead to the arrival of this unique edition at Hopkins."

"Queer Connections: The Library of John Addington Symonds" presents a glimpse of the contents of Symonds' library as reconstructed by members of the Classics Research Lab, including copies of books the researchers have discovered he possessed, books he mentions in his long-suppressed memoirs, and books he wrote, including A Problem in Greek Ethics. It will be on display at the Milton S. Eisenhower Library M-Level through March 2020. 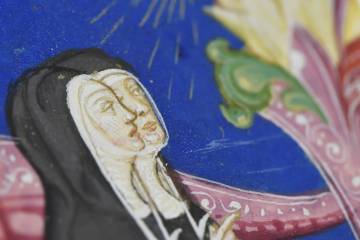 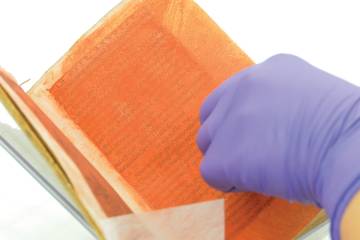 Published Winter 2018
It will take a team of conservators, data scientists, and even an astrophysicist to find out what's written on the Red Cyprian's paint-slathered pages / Johns Hopkins Magazine