Grigg, who joined School of Education in 2014, researched the sociology of education, social stratification, school reform, and the organization of schools

Jeffrey A. Grigg, a School of Education researcher who investigated issues such as early childhood experiences, student mobility, and social stratification, died suddenly on Nov. 10 in Baltimore. He was 42. 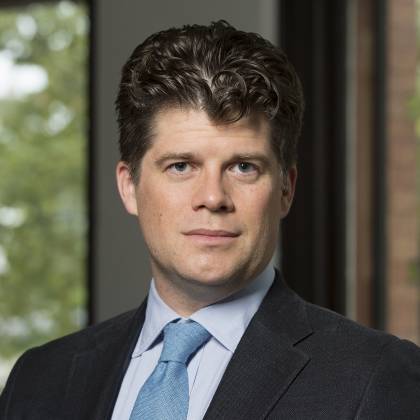 Grigg joined the Johns Hopkins University community as a postdoctoral fellow in the School of Education in 2014 and was named an assistant professor in 2016. He gained a reputation across the university as a collaborative colleague who worked with researchers from the schools of Education, Arts and Sciences, Business, and Public Health on issues such as how dangerous school commutes lead to student absenteeism and the effects of lead exposure on educational outcomes.

From his first days as a postdoc, Grigg held joint appointments with the Baltimore Education Research Consortium and the STEM Achievement in Baltimore Elementary Schools partnership, where he formed promising partnerships with Baltimore City school and health officials. Through those collaborations, he focused on understanding how children's early life experiences are related to school success.

"Jeff was an outstanding colleague, mentor, and friend to many," said School of Education Dean Christopher C. Morphew, who remembered the researcher for his dry wit and compassion. "It is with great sadness that I share the news that we have lost one of our own."

"Jeff was a very intelligent and thoughtful scholar, interested in ideas for their own sake but also interested in research that could improve the lives of the less fortunate."
Stephen Morgan
Bloomberg Distinguished Professor

In 2017, Grigg, the father of three young daughters, was diagnosed with a rare disease associated with the central nervous system. He was on a leave of absence at the time of his death.

"Jeff had that wonderful combination of being a serious and thoughtful researcher who also cared deeply about the life course of Baltimore City's most vulnerable children," said Marc L. Stein, a close friend and collaborator and associate professor at the School of Education. He is also interim executive director of BERC. "He was committed to teaching the next generation of educational scholars."

Bloomberg Distinguished Professor Stephen Morgan remembered the researcher for his promise. "Jeff was a very intelligent and thoughtful scholar, interested in ideas for their own sake but also interested in research that could improve the lives of the less fortunate," he said. "He was perfectly suited for a career in educational research, and we are far worse off without the contributions he would have offered."

Grigg received a bachelor's degree from Yale University in English as well as master's degrees and a doctoral degree from the University of Wisconsin. In 2018, he was awarded a Discovery Award from the Provost's Office for promising work with colleagues from the Bloomberg School of Public Health. He had published widely on the issues of the sociology of education, social stratification, school reform, and the organization of schools.

Grigg is survived by his wife, Lael, and their three young daughters, Margaret, Celia, and Linnea. He also is survived by parents, Douglas and Kaatri, of San Francisco, and brother, Eliot, of Seattle. A private service will be held, and a memorial service will be planned in coming months. In lieu of flowers, the family has established the Jeffrey A. Grigg Memorial Award at the Johns Hopkins School of Education, which will support PhD students and Grigg's legacy of scholarship.