Melanin samples are headed to the International Space Station, where their ability to protect against harmful radiation will be put to the test 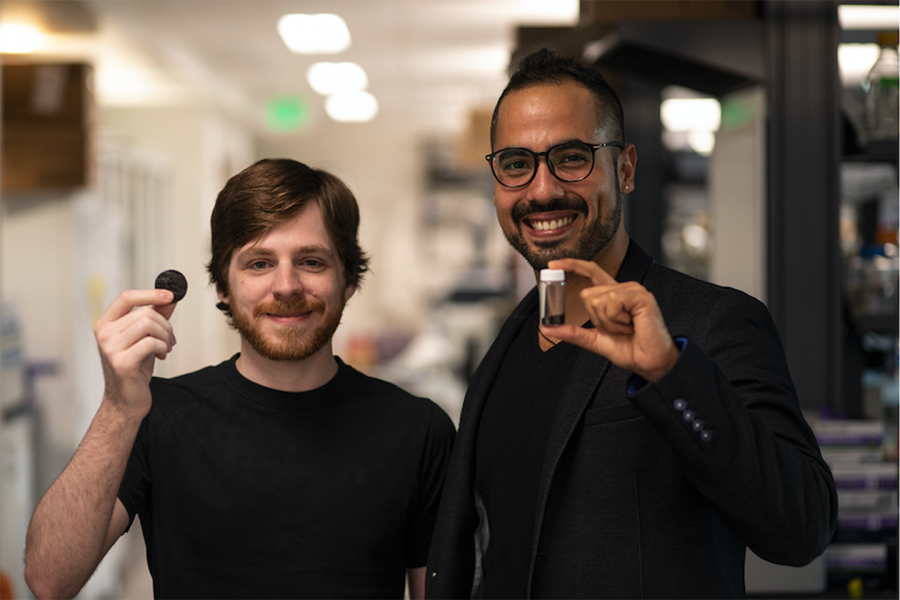 Image caption: Radamés J.B. Cordero (right) and his research collaborator Quigly Dragotakes hold samples of melanin derived from Cryptococcus neoformans similar to the materials that will be sent into space.

When the massive Antares rocket lifts off from Wallops Flight Facility on Virginia's Eastern Shore on Saturday morning, it will carry with it a payload of tiny, fungus-grown biomaterials that Radamés J.B. Cordero has spent the past four years developing and studying intensely.

The material, a composite of fungal melanin and polymers, will be delivered to the International Space Station in Earth's low orbit, where it will be tested for its ability to protect against space radiation. The results of those tests could inspire new ideas about how to protect humans from harmful radiation on Earth and in outer space.

Melanin, a dark brown or black pigment, is found across all biological kingdoms and has been shown to absorb harmful ionizing radiation frequencies that can damage cells.

"We know that space radiation is dangerous and that it damages matter," says Cordero, a research associate in the Department of Molecular Microbiology and Immunology at the Johns Hopkins Bloomberg School of Public Health and the research project lead. "Radiation is hazardous to astronauts and to equipment in space, but radiation exposure is also a concern of health care providers and patients during radiation imaging, radiation therapy, and other related procedures. If you have a material that can act as a shield against radiation, it could not only protect people and structures in space but also have very real benefits for people here on Earth."

This is the first time melanin has been sent to space for testing, partly because the material is extremely expensive to produce, with a gram typically costing roughly $400. Cordero's work centers on a form of melanin grown in the environmental fungus Cryptococcus neoformans, which researchers expect may provide a far more cost-effective "factory" for melanin and may even provide additional protective benefits. 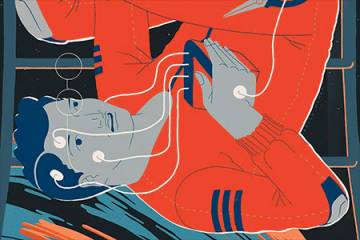 As NASA prepares to send humans back to the moon and beyond, Hopkins scientists work to ensure that future space travelers survive and thrive out there

"Melanin is expressed throughout biology, in plants, animals, bacteria, and fungi," Cordero says. "But when we looked at studies of melanin in the fungal kingdom, we found that melanin not only protects against UV but also has protective functions to other types of ionizing radiation,"

After isolating a powdered form of melanin from the fungus, it was embedded in plastic polymers. The resulting material will also be tested for its structural stability and its ability to withstand the environment of outer space.

The study will unfold over the course of the next several months, and Cordero expects to receive experimental data from the ISS beginning in the middle of next year. He has two additional NASA studies that will take shape over the coming months, with the next study scheduled to launch to the ISS sometime next year.

He says he never expected that his work on microscopic materials would end up traveling to outer space.

"It was a big surprise to be able to do this research, and I sort of wish there was a camera outside the space station looking at the melanin 24/7 so I could watch," Cordero says with a laugh. "But it's a cause for celebration that we're sending a biomolecule that is an intrinsic part of life so very far, and it's going to circle the globe. We are living a very exciting moment in science, I think." 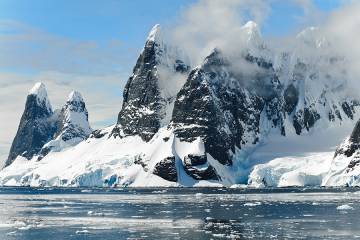 Published Aug 2, 2018
Microbes and fungi that darken when in colder climates have better survival and may be an important variable in modeling climate change, researchers find