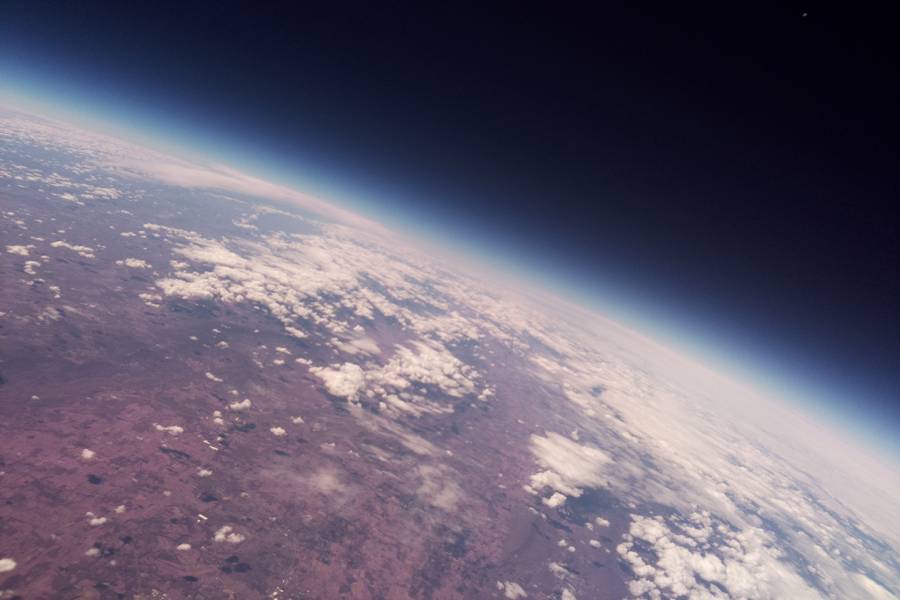 A team of Johns Hopkins students recently launched cameras and other devices more than 16 miles into the Earth's atmosphere to collect data, then tracked and recovered the payload nearly 50 miles away

As Jim Gottschalk readied his final approach shot of the day at Greystone Golf Course in White Hall, Maryland, he looked up to find something unexpected falling onto the 18th fairway—not an errant drive or a wayward 5-iron thrown in a moment of frustration but rather a parachuting package filled with cameras, GPS technology, and a miniature computer floating down from the heavens.

Employees who raced from the clubhouse to examine the odd, formerly airborne box were greeted with a small card labeled with just a single piece of information—the phone number of Brice Ménard.

"I knew it was possible to send something really high up and take these amazing pictures of the Earth; I just didn't know exactly how to achieve it."
Brice Ménard
Associate professor, physics and astronomy

Ménard, an associate professor of physics and astronomy at Johns Hopkins University, leads the Johns Hopkins Helium Balloon Project, an extracurricular engineering group consisting of five undergrads and one graduate student dedicated to floating technology high above the clouds.

Over the course of the school year, the team has worked to prepare for a series of balloon launches, testing their mechanical and programming prowess against the challenges of launching sensitive technology into the stratosphere using an inflatable device whose navigation is subject solely to the cruel whims of nature.

"This is something I've always wanted to do," Ménard said. "I knew it was possible to send something really high up and take these amazing pictures of the Earth; I just didn't know exactly how to achieve it. For students, it's a fantastic project; you can easily see how excited they are." 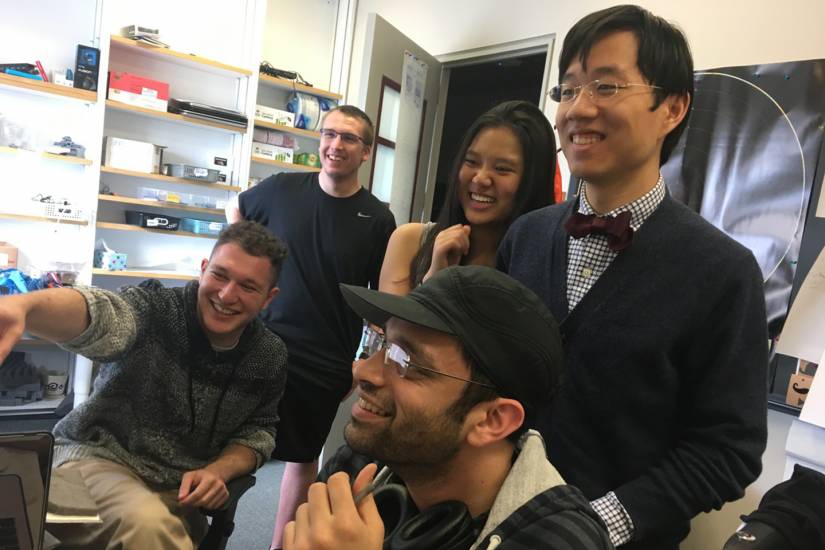 The test flight of the Balloon Project saw the payload lifted 86,791 feet—more than 16 miles—into the air, where it captured images of the Earth and space. For comparison, the Burj Khalifa in Dubai—the tallest building on Earth—rises just 2,722 feet from the first floor to the tip of it s rooftop spire. Mount Everest reaches 29,029 feet at its summit. And the average commercial airline flight hits a cruising altitude of 35,000 feet, some 50,000 feet below the balloon's lofty peak.

The project is designed to teach the team—made up of physics, computer science, and biomedical engineering majors—programming, engineering, and problem-solving skills as they prepare for the launch. While images and atmospheric data are captured during each flight, the learning experience is more about the feat of getting the balloon and the tech in the air than it is about the data they gather during the journey. 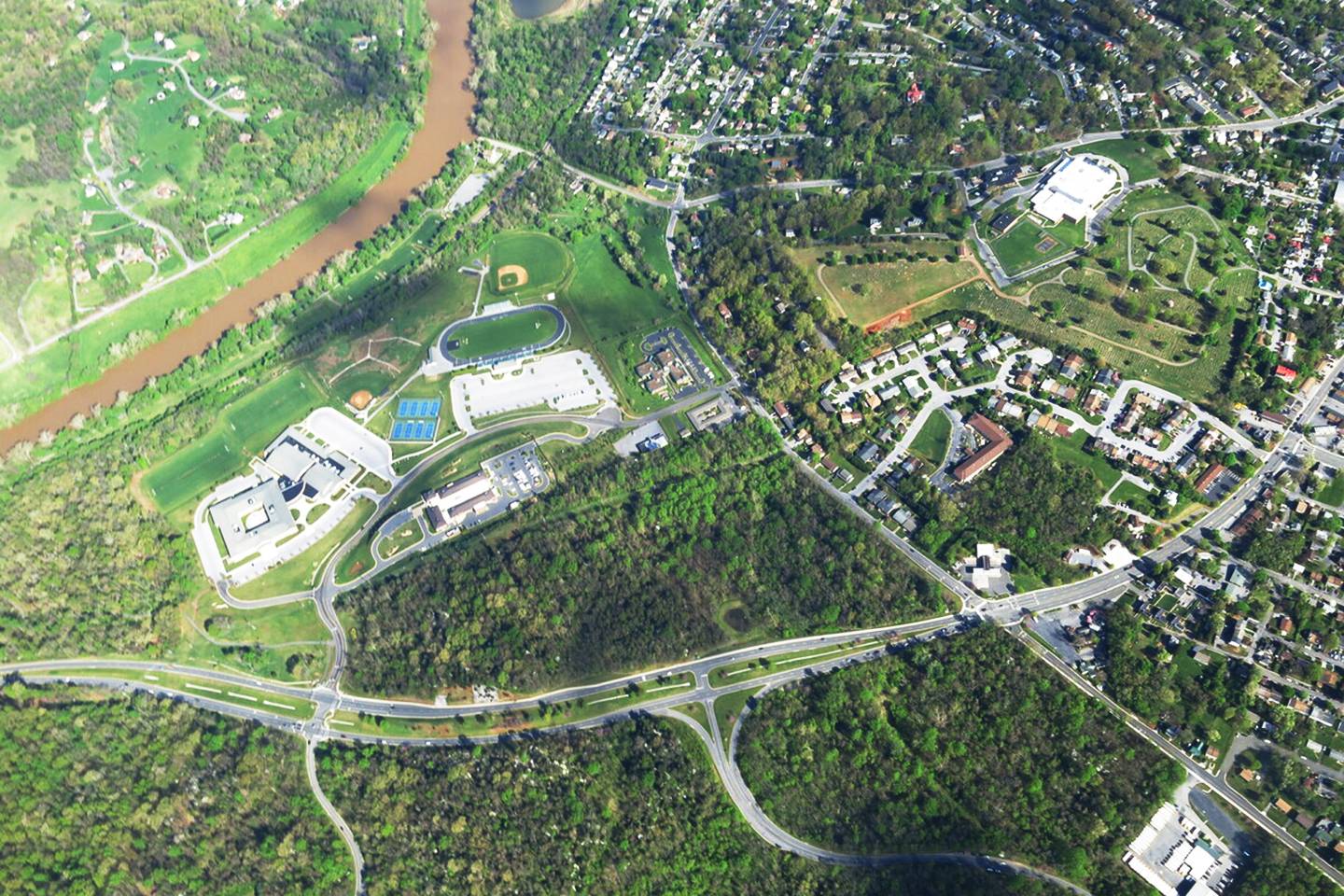 According to team members, the balloon itself is hardly different from the average birthday balloon, just increased dramatically in size. About 10 feet in diameter, the balloon is made up of latex and helium and has the lifting power to pick up some of the smaller members of the group off the ground.

Attached to the balloon is a payload containing cameras, atmospheric measuring tools, and tracking technology. Because a balloon can't be controlled once it's in the air, being able to track the device is of the highest priority. Once in flight, the balloon can travel from 40 to 60 miles away and can reach speeds of 70 miles per hour.

Tracking the balloon is a twofold process. First, software technology is used to analyze weather data and gather an estimate of where the balloon will drift once it's in the air. This is vital because the team has to take care to avoid hazards like airports, and inaccessible locations like city landscapes or a water landing.

Once the estimate is gathered, they take off in a car and try to keep up with the speeding balloon. At a certain height, the balloon pops from the lack of air pressure and the payload begins a parachuted descent. To track the payload, the team has placed a standard cellphone inside that's designed to send out text messages of its coordinates once it's returned to an altitude where cellphone signals can carry.

According to Agustina Quesada, a senior in Physics, and Lisa Zhu, a first-year biomedical engineering major, one of the greatest challenges was insulating the payload so the technology continued to function in the extreme cold of the high altitude. During their test flight, where their payload reached a height of more than 86,000 feet, sensors in the payload measured temperatures as low as -58 degrees Fahrenheit. 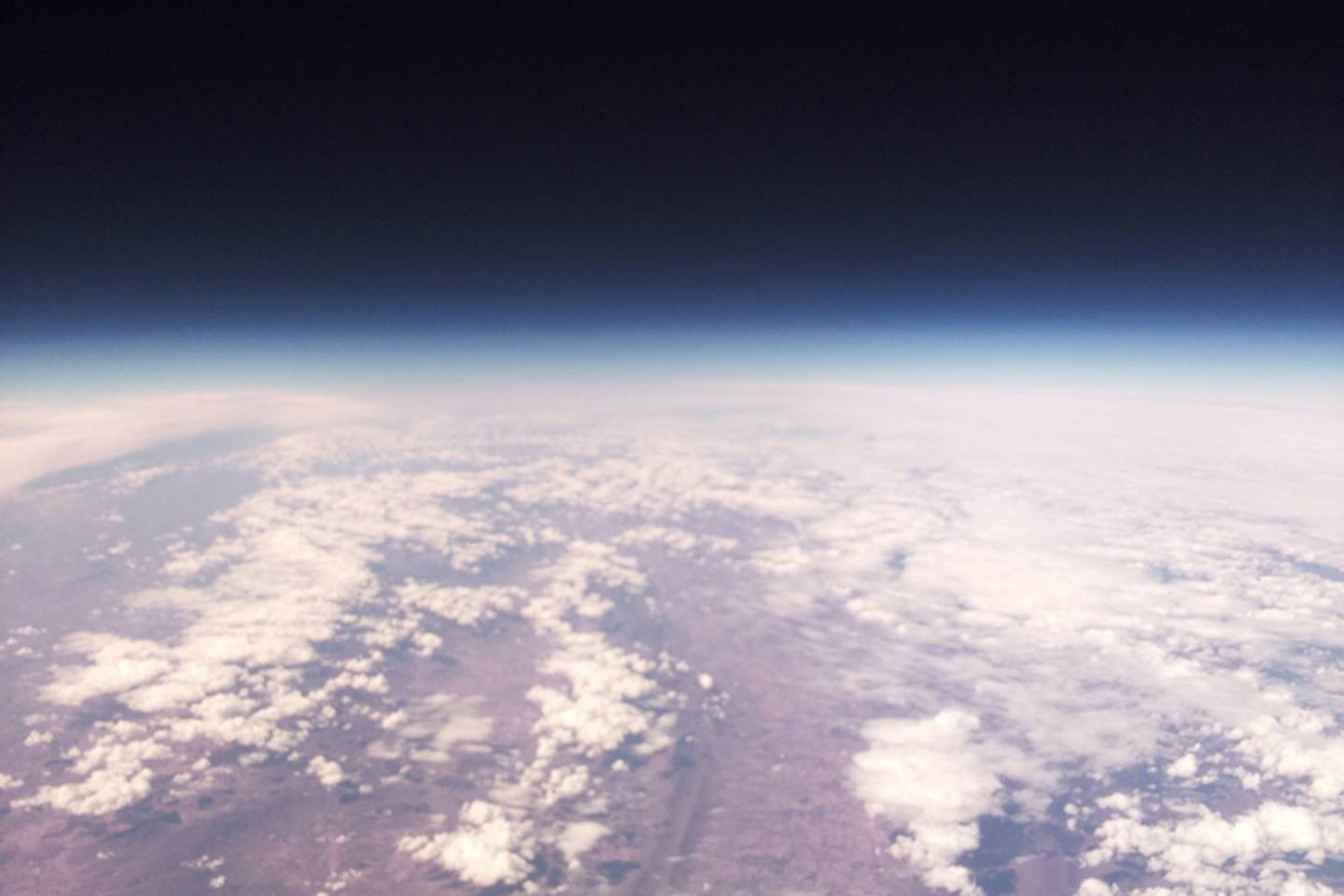 Image caption: Photo taken of the Earth from the atmosphere at the balloon's peak height

The team brainstormed designs capable of carrying and insulating the instruments and of carrying out necessary functions like the tracking component. During the brainstorming process, the team filled notebooks and covered the walls and tables of their laboratory with notes and designs before finalizing their balloon device.

Cheng said one of the major challenges of the project was beginning with essentially no information on how best to achieve their goals.

"We're starting from zero," he said. "At the beginning, when you're first starting out, it's very difficult. Our first payload was much bigger than the current one, and now we know that it was too big, but we had to find that out through the process."

Austin Granmoe, a senior physics major, connected the team with students at the University of Maryland who were working on their own high-altitude balloons and payloads. The experience of the Maryland team, which has participated in more than 60 launches, helped bring into focus many aspects of the Hopkins balloons and payloads.

To test their technology, the team attached their payload to one of the Maryland team's balloons for their "Flight Zero" on April 21. Because the balloon's landing is tied directly to the weather, the launch site can't be decided on until the day of the flight said Anant Bhargava and Nikita Shtarkman, students in computer science.. For the test flight, they sent their payload—consisting of a Raspberry PI with attached camera, a secondary camera, APRS beacon, a webcam, and a Canon camera—to Front Royal, Virginia. 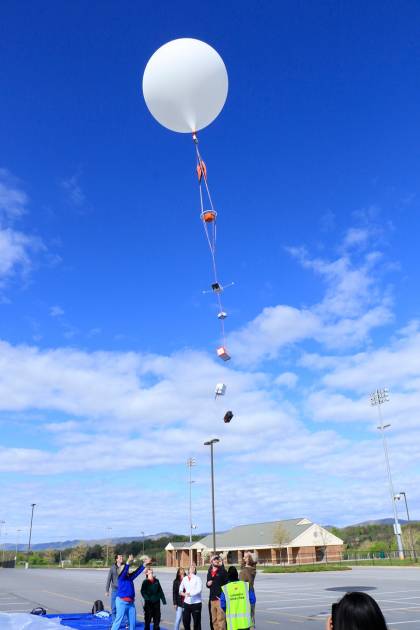 Image caption: A test flight of a Hopkins payload using a University of Maryland Balloon is launched

After an hour and 40 minutes in flight, the package came floating down in a field just outside Williamsport, West Virginia, some 50 miles northwest. The team recovered the tech, along with detailed data on atmospheric pressure, air temperature, and relative air humidity, and complete with stunning photographs of the upper atmosphere.

Zhu said the success of the test flight, in which all the technology was recovered and still functioning, built up anticipation for the team's first flight using its own balloon. For the team's first official solo flight, on Saturday, May 4, an infrared camera was added to the payload.

The balloon launched from Frederick, Maryland, and traveled 48 miles northeast to White Hall, Maryland. It reached a maximum altitude of 39,055 feet—less than half as high as their test flight—before popping and beginning its descent.

Owing to overcast weather on the day of the launch, the team scrapped plans to include a 360-degree camera and a second balloon intended to capture footage of the first balloon popping in the upper atmosphere. Ménard said the team hopes to perform another launch on a clear day after final exams are over and to be able to realize both of those plans.

It was this first official flight on May 4 that came down among the confused employees and patrons of the Greystone Golf Course. By the time the team reached the location, employees had called Ménard to tell him they found his payload.

Though not everything had gone according to plan, Ménard said the group's first official flight was an unqualified success.

"Not only did we have a successful launch," Ménard said, "we got to play a round of golf for free."