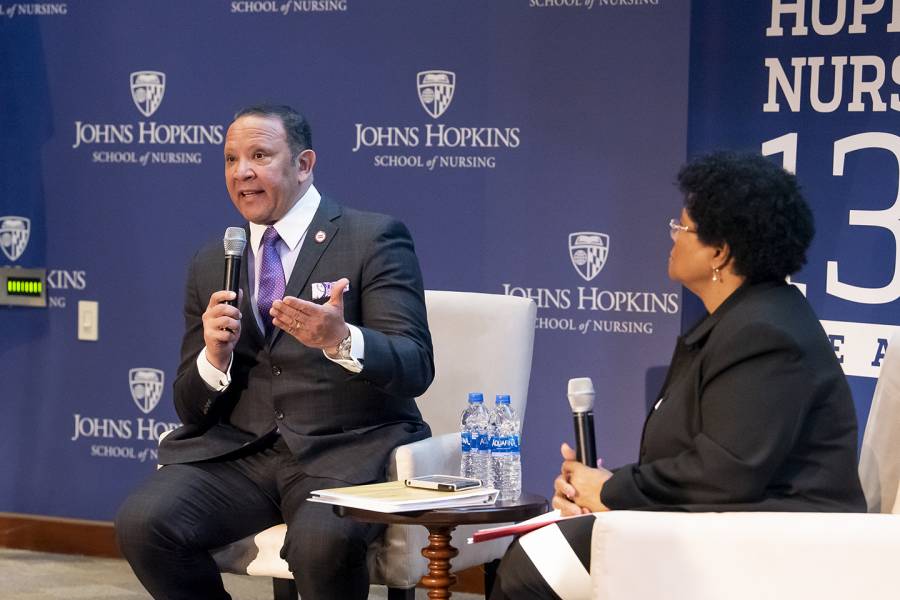 America is only now turning the corner from its history of racial exclusion, Marc Morial, president of the National Urban League, said at a Johns Hopkins University forum on Wednesday.

Noting that it has been 400 years since the first arrival of enslaved Africans in Virginia and roughly 50 years since the civil rights movement, Morial said the challenge of this century will be figuring out how to foster a "diverse and inclusive America."

"It is essential to American survival," he said. "This issue is an issue of morality, an issue of historic positioning. An issue that has to touch each and every person, each and every institution, because ... we have to get it right."

Before taking the helm of the Urban League, a 105-year-old civil rights organization, Morial served as the 59th mayor of New Orleans and on the Louisiana State Senate. He visited the Johns Hopkins School Nursing for a talk titled "Health Care Equity from a Social Justice Perspective," delivered as a part of the JHU Forums on Race in America series. He spoke with Phyllis Sharps, associate dean for community programs at the nursing school.

"Marc Morial set the stage for a crucial conversation moving to thoughtful action," said Patricia Davidson, dean of the School of Nursing. "His historical perspectives, in a contemporaneous political and social context, provided a call to action to make a better America through commitment to institutional change."

Among other topics of health equity and social justice, Morial shared his thoughts on:

"The Affordable Care Act did more to narrow health disparities than any other measure in recent history. Period," Morial said of the health care reform law enacted under President Obama in 2010.

He acknowledged the reform fell short in many ways—political realities ensured it was "really a modest type of measure," he said—and that it remains under assault today, but Morial said he believes much of the opposition to the law stems from discrimination.

"Let me just be frank with you," Morial said. "It's [a mindset] that somehow people with money are being taxed to provide health care to people who are not worthy. That's the conversation that goes on when the door is closed."

One of the law's unsung benefits, he pointed out, has been creating demand for more jobs in the health care sector.

"You need more people to provide health services to the people who now have an opportunity for health," he said.

Morial said this idea, which he expects to be a hot-button issue in 2020 election, is currently " more of a slogan and an ideal" than a fully formed proposal.

He said he prefers a vision of affordable, universal coverage offered through multiple avenues rather than a single-payer system.

Asked how to close employment gaps for tech-oriented jobs, Morial shared some surprising findings from recent research from the Urban League: While African-American millennials have the highest rates of social media use and are much more likely to own a smartphone than any other segment of the population, he said they are vastly underrepresented as employees of the powerhouses of Silicon Valley: Google, Facebook, Twitter, and Amazon.

Further, he said, researchers discovered that although there's not a substantial difference in the percentage of white versus black students who major in computer science, the more sophisticated training is often confined to "elite schools" rather than broadly available at public universities and community colleges.

"We've got to do some correct matching," he said, adding that apprenticeship programs could help bridge the gap. "You bring people in and you train them on the job, versus saying, if you don't have the skills when you walk in, we can't hire you."

A Johns Hopkins research coordinator asked Morial for his thoughts on how to structure clinical research so that it applies more broadly "to a very diverse and variable country and world." His response focused on empowerment.

"Researchers have a voice," he said. "[They have a responsibility to point out] our research isn't worth diddly if all we're doing is researching a narrow portion of the population. And I think the pharmas and the people that make medicines and therapies have to say the same thing."

An easy starting point? "As professionals, we all should avail ourselves of implicit bias training," he said. "You know, we all have it in us."

But a central tension of today's America is its evolving racial composition, Morial acknowledged.

"The country is not going to be what it was in 1950," he said. "It is changing, and I, for one, think it's exciting and we should embrace it. Some people may be fearful of it, and some people may be oppositional to it. But they're fighting a false war, right?" 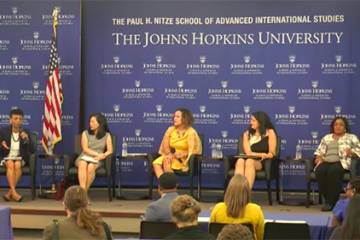 Published Sept 19, 2018
Women of color in leadership positions engage in wide-ranging panel discussion as part of 'JHU Forums on Race in America' series