Wide-ranging panel discussion addresses barriers and opportunities in politics, business, and the workplace

With one succinct and striking example, Serena Fong neatly summed up many of the systemic obstacles to change faced by women.

Fong, vice president of strategic engagement at Catalyst—a global nonprofit that works to advance women in the workplace—recalled watching a recent congressional hearing on the topic of health care for women.

"It was all white men," she said. "All white men, making decisions about women's health care. That's a problem."

When the pendulum swings toward justice, it doesn't swing, it gets pushed. And what we need right now is people who are willing to push."
Janice Mathis
Executive director, National Council of Negro Women

Fong was one of four women who participated in a lively and wide-ranging panel discussion Wednesday afternoon titled "The Global Empowerment of Women and the Impact of Women of Color on Public Policy." The event, part of the JHU Forums on Race in America series, took place at the Johns Hopkins School of Advanced International Studies in Washington, D.C., and was moderated by Noemi Crespo Rice, assistant dean of student affairs at SAIS.

The panelists spoke openly about the barriers encountered by women—particularly women of color—in business, in politics, and in the workplace. But they also pointed to a growing—albeit sometimes subtle—sense of change on those fronts.

Veronica Cool, a native of the Dominican Republic and founder and CEO of Cool & Associates, a management consulting firm that connects the mainstream business community with the Hispanic community, spoke about the growth of the Latino population in the U.S. overall, and specifically about a significant increase in the number of Latina entrepreneurs.

Fong discussed recent shifts in discussions about the gender pay gap—from a pattern of denialism to "OK it exists—how can we close it?"

Elsie L. Scott, founding director of the Ronald W. Walters Leadership and Public Policy Center at Howard University, talked about a nationwide spike in the number of women running for political office, backed by groups such as EMILY's List and other political action committees that support female candidates.

She noted that political activity among women—especially young women—is on the rise, and that increasingly those women are identifying as independents. 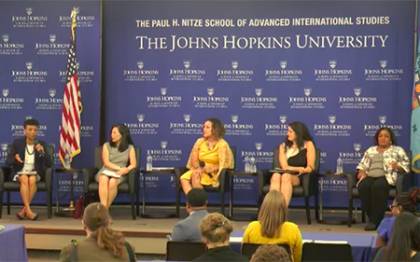 "They don't feel like either political party is serving their interests at this time," she said.

The panelists also discussed both the importance and the limitations of the #MeToo movement against sexual harassment and sexual assault.

"I don't know a single woman who has not experienced some form of sexual harassment or inappropriate behavior," said Janice Mathis, executive director of the National Council of Negro Women. "So that tells you it's something that needs to be addressed.

"What concerns me is, once you get past the high-profile targets, what is it like for the waitress in that restaurant where you just ate lunch? What is it like for the woman who needs that paycheck to feed her family? That's why we need legal protections. … People will change their hearts and minds when the law changes."

In closing, all four panelists encouraged women and allies to get involved, to ask questions, and to keep pushing for changes, however incremental.

"Don't get overwhelmed by the size and the amount of the problems and issues," Fong said. "You can make a change. They don't have to be gigantic efforts or activities. Simply by asking a question—Hey, why is the panel all white men?—that's making a change. … Those kinds of things make a difference. Even small, intentional actions matter. They help, and you should do them."

Added Mathis: "When the pendulum swings toward justice, it doesn't swing, it gets pushed. And what we need right now is people who are willing to push."

The Forums on Race in America were established in spring 2015 to inform and expand the discussions that were ongoing in the university's classrooms, workplaces, and public spaces: discussions about racial equality, divisions in our society, and the toll of institutionalized racism. Wednesday's event was co-presented by the university's Office of Diversity and Inclusion and the SAIS Diversity Committee. 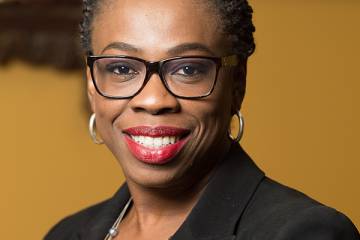 Published Sept 17, 2018
'Women of color are no longer leading resistance from the margins,' says adjunct lecturer Chiedo Nwankwor, who will speak during a JHU Forums on Race in America event on Wednesday