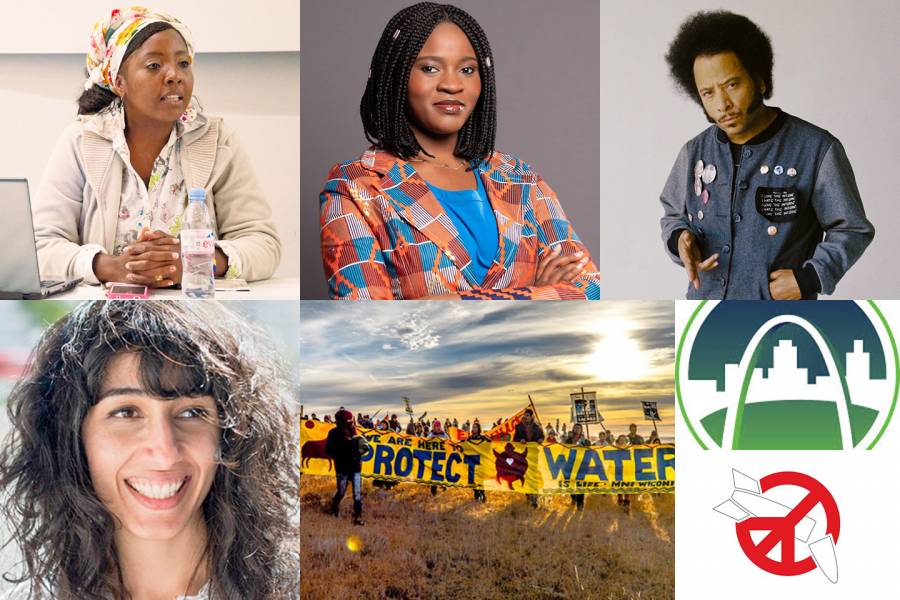 Image caption: Speakers include (top row, from left) Erlendy Cuero Bravo, Farida Nabourema, Boots Riley, and (bottom row, from left) Solmaz Sharif, as well as representatives from the Lakota People's Law Project, the ArchCity Defenders, and the International Campaign to Abolish Nuclear Weapons, among others

A diverse array of activists is slated to visit Johns Hopkins University this semester as part of the annual Foreign Affairs Symposium. This year's theme is "Disrupt."

"Our symposium this year focuses on grassroots activism—speakers who confront power structures head-on and fight for change," said co-executive director Kiana Boroumand. "We're hosting our most diverse lineup in history."

"Throughout its history at Johns Hopkins, the Foreign Affair Symposium has strived to create a platform for discourse on diverse current issues," said co-executive director Nimish Vyas. "This year's theme embodies our effort to host speakers involved in grassroots movements, as opposed to the status quo."

All events are free and open to the public. The lineup includes:

Bravo is vice president of the National Association of Displaced Afro-Colombians and a legal representative for victims of violence and torture. Bravo is the winner of the symposium's annual Smedinghoff Award, created in honor of Johns Hopkins graduate and former symposium co-chair Anne Smedinghoff, who was killed in 2013 by a suicide bomber in Afghanistan.

Sharif's debut poetry collection LOOK was a finalist for the 2016 National Book Award and 2017 PEN Open Book Award. In LOOK, she recounts her family's experience with exile and immigration in the aftermath of warfare—including living under surveillance and in detention in the United States. She is currently a Jones Lecturer at Stanford University.

ICAN is a global coalition of non-governmental organizations that promotes adherence to a treaty-based ban on nuclear weapons. With 532 partners in 103 countries, the organization, which won the 2017 Nobel Peace Prize, has led the movement against nuclear weapons through organizing public awareness campaigns and advocating for an international agreement within the United Nations.

Riley is a Chicago-born activist-artist who has received critical acclaim for his directorial debut Sorry to Bother You, a surrealist dark comedy that takes place in a dystopian world of telemarketing that explores the intersection of capitalism and racism. Riley is also the lead vocalist for Street Sweeper Social Club and his hip-hop group, The Coup, has released politically-charged albums for the last three decades.

Panelists include representatives from:

This event has been cancelled. This is a joint event between the symposium and the university's Stavros Niarchos Foundation Agora Institute as part of the SNF Agora Democracy Dialogues Series. Nabourema is a prolific social activist and writer, recently emerging as the unequivocal voice of Togo's pro-democracy movement. She is also the executive director of the Togolese Civil League, an NGO that promotes democracy and human rights in Togo. In 2011 Farida founded the Faure Must Go movement at the age of 20.