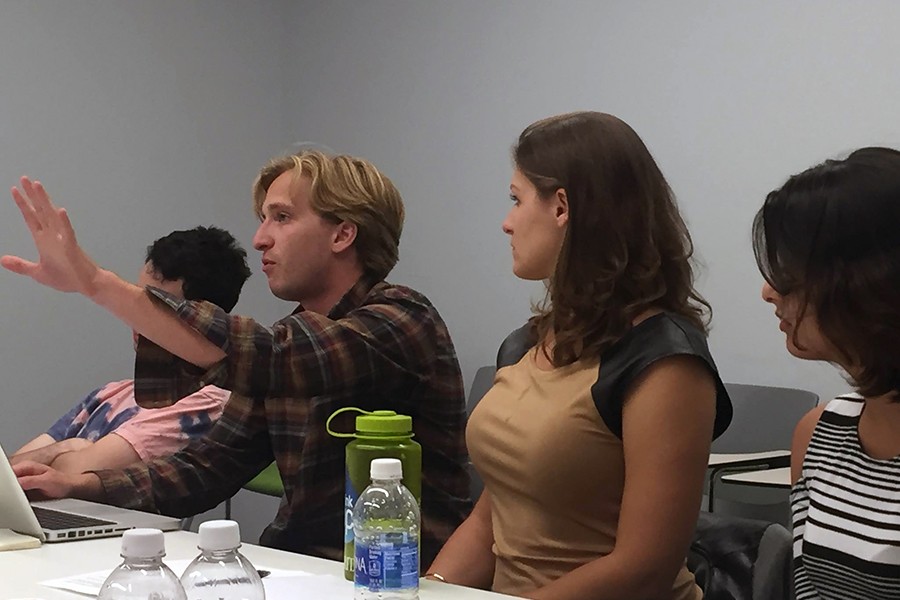 Image caption: "To be a good TV writer, you have to be used to writing in a group of several other people—coming up with ideas together, and making the room laugh," says senior lecturer Meredith Ward.

To find his way to become a comedy producer in Los Angeles, Luke Kelly-Clyne had to turn his back on practicality. In 2011, he ditched a job on Wall Street, "taking a huge salary cut," he says, to focus on his humor writing and start work with a small production company.

In the end, the gamble paid off. Today Kelly-Clyne, who graduated from Johns Hopkins in 2010 with a degree in political science, heads up development at Big Breakfast, the parent company of CollegeHumor, where he writes, directs, and produces original comedy series.

And this past fall, Kelly-Clyne returned to Hopkins to mentor students who may be chasing similar ambitions. 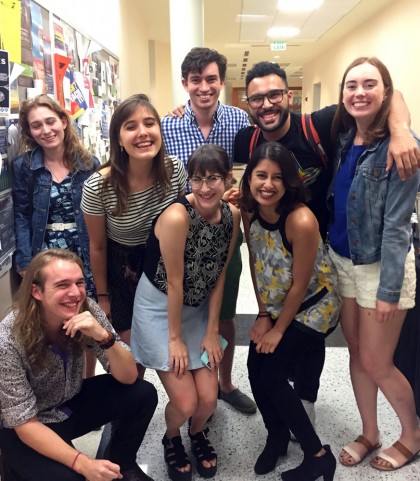 Image caption: The TV Writers Room group developed a tight bond by hashing out scripts together

One big difference at Hopkins today, versus his time there, is a program called the TV Writers Room.

Conceived by senior film lecturer Meredith Ward, the program offers undergrads a taste of TV writing through weekly brainstorming sessions and table reads. It's modeled in the collaborative spirit of the real-life writers rooms in Hollywood and New York that work behind the scenes of TV production, crafting scripts and series arcs.

"To be a good TV writer, you have to be used to writing in a group of several other people—coming up with ideas together, and making the room laugh," says Ward, who started the project last fall with a group of eight undergraduates and with support from the Saul Zaentz Innovation Fund.

Kelly-Clyne was among several industry pros who consulted with the TV Writers Room during its first year, along with Emmy-nominated Saturday Night Live writer Zack Bornstein and screenwriter Sarah Gubbins, the co-creator and showrunner for the Amazon series I Love Dick.

"We didn't have any infrastructure like this," says Kelly-Clyne of his time as an undergrad at Hopkins, when he dabbled in film studies. "I had to figure things out for myself," he says.

That's not the case for Kyra Lesser, a recent graduate who majored in Film and Media Studies and who took the role of showrunner for the TV Writer's Room this past year. She led the group in constructing scripts for two original web series.

She learned how to write on a deadline, she says, as well as "the importance of working with a fantastic bunch of writers to create the best content possible."

With most of this year's participants now graduated—and pursuing jobs in the TV and film industry—the TV Writers Room is currently accepting applications for its next round.

Ward says the experience gives students a chance to cut their teeth working in a group and ideally make them more hirable as staff writers for TV shows.

"Television is where a lot of media culture is heading, in terms of the actual jobs and where a lot of interesting work is being done," she says, naming Netflix, Hulu, and Amazon as among the destinations for today's generation of writers.

"Television is where a lot of media culture is heading, in terms of the actual jobs and where a lot of interesting work is being done."
Meredith Ward
Senior film lecturer

Over the past fall, the Hopkins program created scripts for an eight-episode web series called ReBertha, featuring a cast of characters at a senior assisted-living facility. Then in the spring, the writers challenged themselves to each craft a script around the first time a character speaks the three words "I Love You." They call their resulting project 16 Episodes by Eight College Students About Three Words.

Both series are now seeking investors for production, Ward says.

In the process of hashing out those scripts together—one night each week, gathered around a table—the group developed a tight bond, the professor says.

"They're funny, they're smart, and they're really such darn good writers," Ward says. "It's been great to walk into a room of funny people and genuinely be amused for three-and-a-half hours."

Big picture, Ward says, the TV Writers Room is part of a maturing Film and Media Studies program at Johns Hopkins that's focused more than ever on gearing students toward real-world jobs in the entertainment industry.

The writers room is an offshoot of Studio North, another program Ward spearheaded with undergraduates in recent years to offer hands-on experience creating, producing, and premiering short films and web series.

"Hopkins now in 2018, versus even 2009—it's a sea change," says Ward, citing also the new resources available at the JHU-Mica Film Centre in Station North. "We have the equipment, the faculty, and programs."

Graduates "may not stay in Baltimore," she says, "but there's a little bit of Baltimore in Los Angeles now."

To apply for the 2018-19 round of the TV Writers Room, candidates should submit a current resume, cover letter, and screenwriting sample of 20 pages or less to studionorthmd@gmail.com. The deadline is July 10. 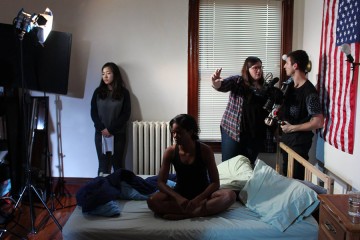 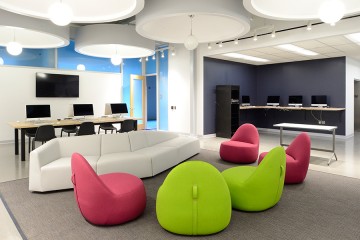 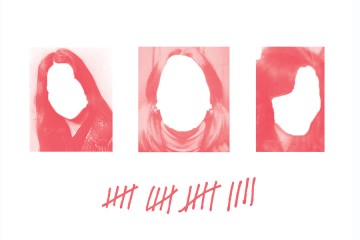