In Barnstormers' 'Pippin,' something dark lurks beneath boisterous surface 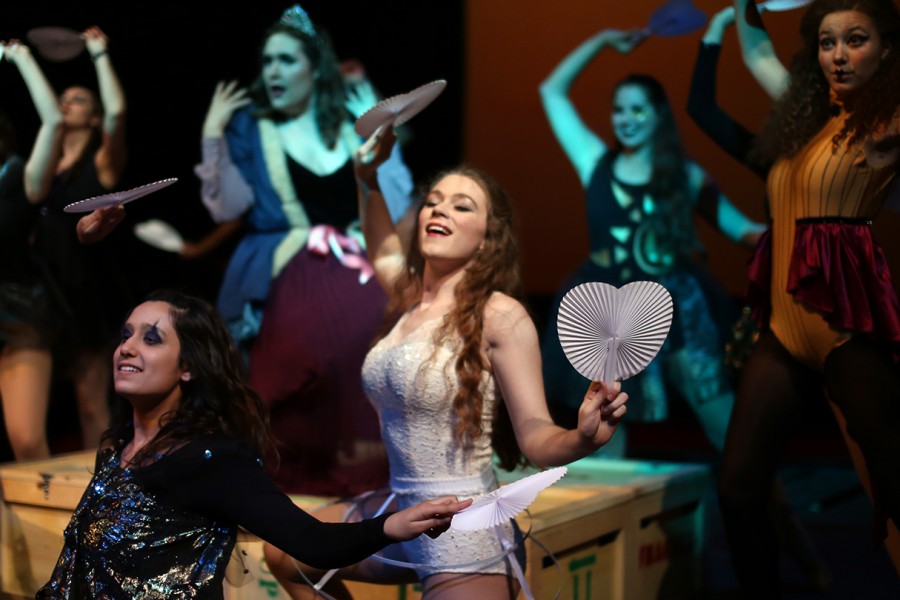 What separates a charlatan from Charlemagne? A monk from a murderer? A battle from burlesque? In the spring musical production of Pippin, the Johns Hopkins Barnstormers blur those lines to deliver a bawdy romp laced with satirical undertones that paint a surrealist vision of life.

On its surface, Pippin is a coming-of-age tale about a boy who would be king. A ragtag troupe of players, captained by the Leading Player—a seductive, commanding ringleader played by junior Sophia Diodati, who steals every scene—act out the story of the son of Charlemagne who returns home, uninspired, from university and searches for meaning in his life.

The play's straightforward premise is persistently subverted. The players regularly remind the audience that we're witnessing a play taking shape within the play: actors miss their cues and are reprimanded by the Leading Player. They assume multiple roles, come back to life after death, and address the audience directly—breaking the so-called fourth wall. The only person not in on the joke, it seems, is Pippin (played by sophomore Sebastian Durfee), who is thwarted in his attempts to find valor in war, fulfillment in his sexual liaisons, and political influence as king. 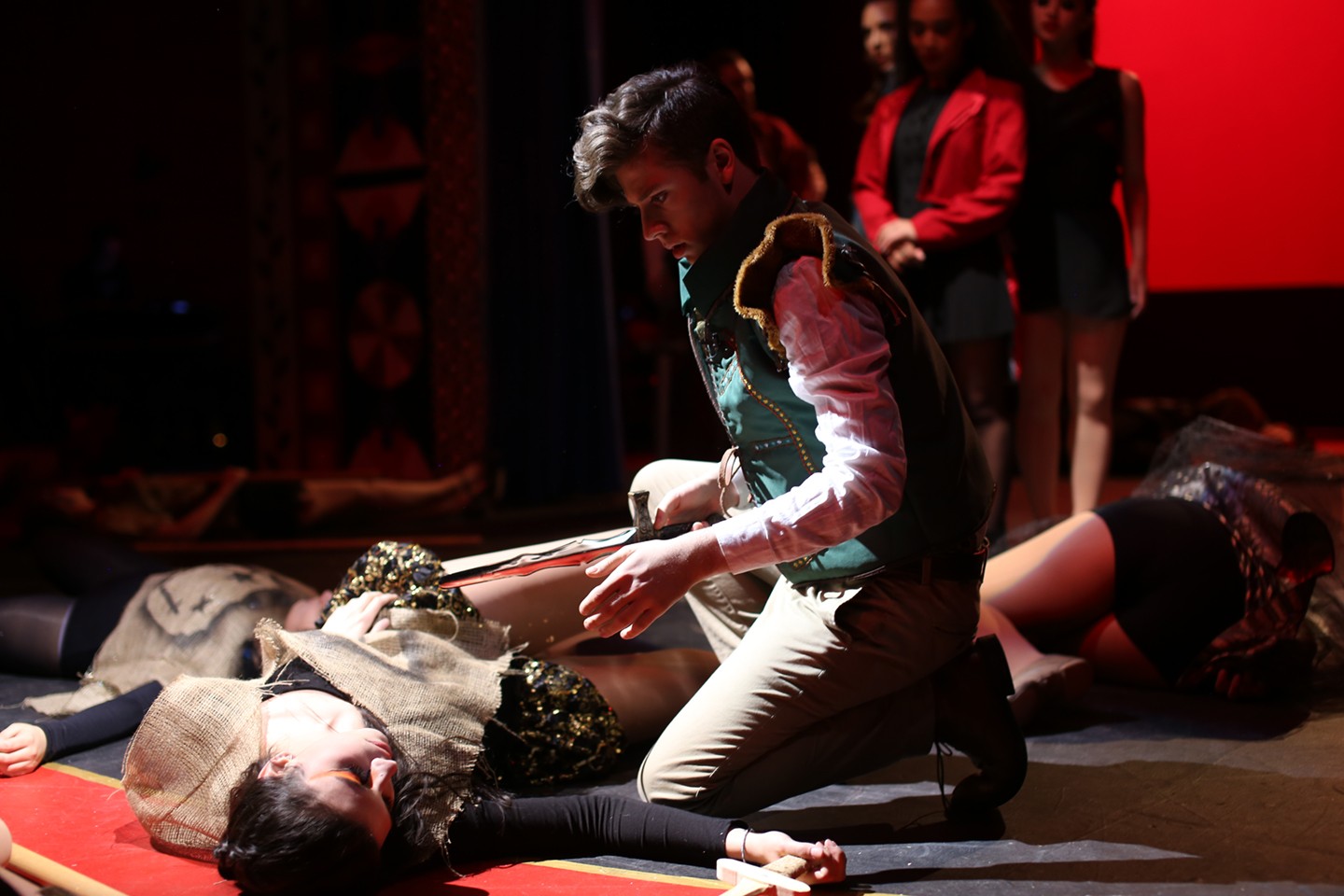 But is he prevented from success by his own shortcomings, or is something more sinister at work against him?

"Pippin is a really dark play," says director Claire Edmonds. "It's full of boisterous music, bright colors, and delightful characters, and more often than not it's watered down to accommodate young performers and young audiences—but the result of that dilution is confusing. All that color and brightness is supposed to unleash the audience and bring them to a peak of joy so we can push them down the slide into a place of reflection."

She adds: "From square one, the Barnstormers board and I were on the same page—in order for this story to make sense, we had to fully embrace that darkness, depth, and substance."

It's a difficult balancing act to pull off, especially given the production's technical demands. The play unfolds like a psychotic circus of anachronistic costuming and design (Roller skates! Crusaders! Electric guitars! Sad mimes!), all of which orbit a proscenium arch designed by senior Isabel Randazzo, who says she was inspired in part by the unsettling set design of David Lynch. There are on-stage costume changes, trapdoor reveals, and a whirlwind of dance—ballet, interpretive, and tap—all choreographed by Edmonds and junior Samantha Albstein. Even the musicians, JHU students led by conductor Erich Rausch, get in on the action, interacting with the players as if they, too, are part of the troupe. 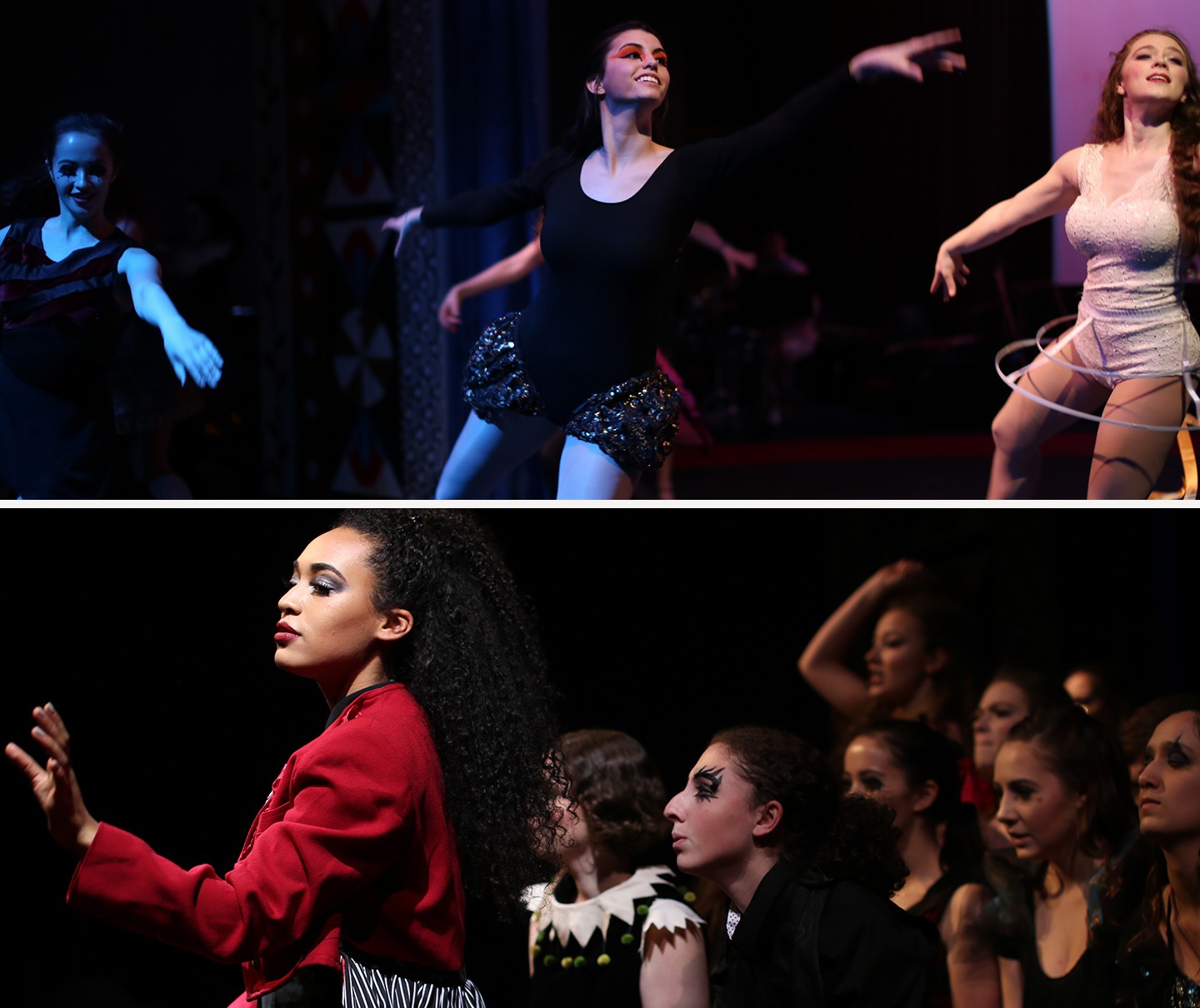 Image caption: Above: Many of the cast members have some dance training, making for beautiful ballet and tap interludes. Below: Is the Leading Player, played by Sophia Diodati (left), simply a demanding stage director, or something more?

The effect is enchanting, with the performance utilizing every darkened corner of the theatre, suggesting that the magic—and mischief—lurks all around.

It's also an envelope-pushing production, with raunchy humor and overt sexuality. It seems eerily well suited to 2018, lampooning topics such as political corruption and ineptitude, patriarchal norms, and social activism. As Pippin, Durfee embodies the worst stereotypes of modern youth culture: disaffectedness, sexual promiscuity, indecision, and entitlement.

And yet the production undeniably works as a spring musical on a college campus. When Pippin's grandmother sings a song about living life to its fullest and "raising some hell," it's impossible to forget the Johns Hopkins students who are studying in dorms and libraries despite the warming days and beckoning quads. The existential dread Pippin feels—and the doomed journey he embarks on after completing his education at the prestigious University of Padua—is likely to pierce the heart of any senior anticipating commencement with a mixture of joy and dread.

"We saw the story of Pippin as very relevant to us as college students," says senior Gillian Lelchuk, the play's producer. "A lot of us are seniors, and we're at this turning point in our lives where we're trying to figure out where we're going. Obviously the play is very dark, but there's also a message of writing your own narrative, and in that way it can be kind of uplifting."

Part circus, part cabaret, part existential hellscape, the JHU Barnstormers' production of Pippin will scratch an itch you didn't even know you had—at least not until the Leading Player gets inside your head.

Upcoming performances of Pippin are Friday, Saturday, and Sunday in Swirnow Theatre on the Johns Hopkins University Homewood campus. Tickets are available online. 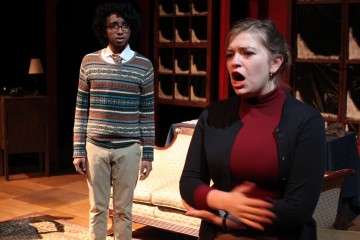