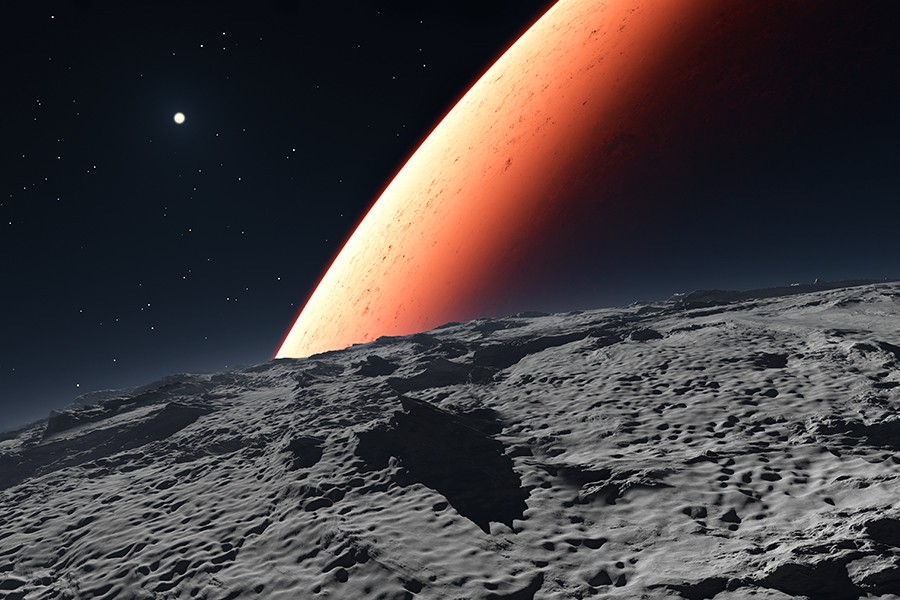 Image caption: Martian moon Deimos with the red planet Mars in the background.

Scientists at the Johns Hopkins Applied Physics Laboratory have been tasked with building a pair of space-ready spectacles for a Japan-led mission to two moons of Mars.

The instrument, a sophisticated gamma-ray and neutron spectrometer named MEGANE—pronounced meh-gah-nay, meaning eyeglasses in Japanese—will help scientists resolve one of the most enduring mysteries of the Red Planet: when and how the small moons formed.

Planned for launch in 2024, the Martian Moons eXploration being developed by the Japan Aerospace Exploration Agency will visit the Martian moons Phobos and Deimos, land on the surface of Phobos, collect a surface sample, and then return that sample to Earth. NASA is supporting the development of one of the spacecraft's seven science instruments.

"Solving the riddle of how Mars' moons came to be will help us better understand how planets formed around our sun and, in turn, around other stars," said Thomas Zurbuchen, associate administrator for NASA's Science Mission Directorate at headquarters in Washington, D.C. "International partnerships like this provide high-quality science with high-impact return." 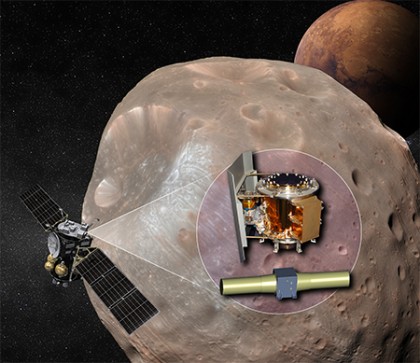 Image caption: Artist’s concept of the Japan Aerospace Exploration Agency’s MMX mission to explore the two Martian moons, Phobos and Deimos; the inset shows the gamma-ray and neutron spectrometer—to be built by APL—that will measure the moons’ surface elemental composition.

APL space scientist David Lawrence will lead the team developing MEGANE, also an acronym for Mars-moon Exploration with GAmma rays and NEutrons. The instrument will give the mission team the ability to "see" the elemental composition of Phobos and Deimos by measuring naturally emitted gamma rays and neutrons from the Martian moons. These gamma rays and neutrons are generated by cosmic rays that continually strike and penetrate their surfaces.

The measurements will help scientists determine whether the Martian moons are captured asteroids or the result of a larger body hitting Mars. MEGANE data will also support site selection for the MMX-gathered samples that will be returned to Earth, and provide critical context as scientists study these samples.

"Understanding how Phobos and Deimos formed has been a goal of the planetary science community for many years," Lawrence said.

APL has built 69 spacecraft and more than 200 specialized instruments that have collected critical scientific data from the sun to Pluto and beyond. The lab's most recent Mars instrument—the powerful Compact Reconnaissance Imaging Spectrometer for Mars, or CRISM, aboard NASA's Mars Reconnaissance Orbiter—uncovered a wide range of chemical evidence indicating where and when water was present on the Red Planet.