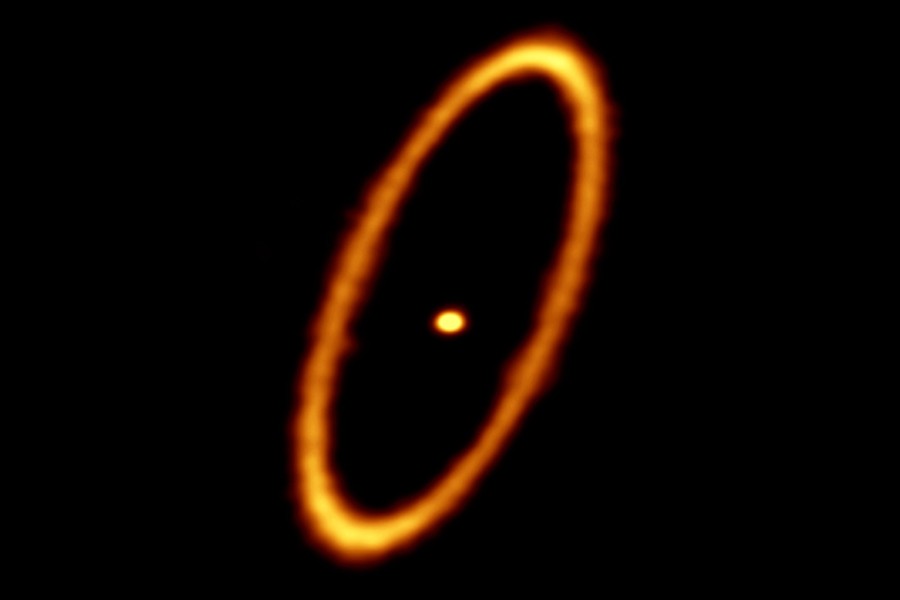 Image caption: The ring in the Fomalhaut star system is approximately 12.4 billion miles from the central star and about 1.2 billion miles wide. The central dot is the unresolved emission from the star, which is about twice the mass of our Sun.

Narrow, dense rings of comets are coming together to form planets on the outskirts of at least three distant solar systems, astronomers have found using data from a pair of NASA telescopes.

The researchers have estimated the mass of these rings by measuring the amount of light they reflect, finding that each of these developing planets is at least the size of a few Earths, according to Carey Lisse, a planetary scientist at the Johns Hopkins Applied Physics Laboratory in Laurel, Maryland.

Instead of finding a planet built from one big "construction site," researchers are observing planets rising from many small construction sites, which will eventually merge their work into the final product.

Presenting his results today at the American Astronomical Society's Division for Planetary Sciences meeting in Utah, Lisse said scientists are especially intrigued by the red dust ring surrounding the system dubbed HR 4796A, which shows unusually tight form for an infant solar system.

Lisse traces the extreme red color to the burnt-out, rocky organic remains of comets, a result of the system's ring being close enough to the star that they have all boiled off. The researchers don't see red ring dust in two of the other systems observed—called Fomalhaut and HD 32297—and instead see normal bluish comet dust containing ices, which indicates that these systems' rings are far enough away from their stars that their comets are cold and mostly stable.

"The narrow confines of these rings is still a great puzzle—you don't typically see this kind of tight order in such a young system," Lisse said. "Usually, material is moving every which way before an exoplanetary system gets cleaned out and settles down, so that planetary bodies rarely cross each other's path, like in our present-day solar system."

Through a process of elimination, Lisse and his co-authors have attributed the tight structure of these systems to multiple coalescing bodies "shepherding" material through the rings.

"Comets crashing down onto these growing planet surfaces would kick up huge clouds of fast-moving, ejected 'construction dust,' which would spread over the system in huge clouds," Lisse said. "The only apparent solution to these issues is that multiple mini-planets are coalescing in these rings, and these small bodies, with low kick-up velocities, are shepherding the rings into narrow structures—much in the same way many of the narrow rings of Saturn are focused and sharpened."

This is a paradigm shift for researchers, he added, because instead of finding a planet built from one big "construction site," they are observing planets rising from many small ones, which will eventually merge their work into the final product. Recent studies have yielded similar theories about the formation of the giant gas planets Uranus and Neptune, that each had multiple "subcores" that were eventually covered by thick atmospheres.

In Fomalhaut and HD 32297, researchers expect that millions of comets are contributing to form the cores of ice giant planets like Uranus and Neptune—although without the thick atmospheres, since the primordial gas disks that would form such atmospheres are gone. In HR 4796A, with its warmer dust ring, even the ices normally found in the rings' comets evaporated over the last million years or so, leaving behind core building blocks that are rich in leftover carbon and rocky materials.

"These systems appear to be building planets we don't see in our solar system—large, multi-Earth mass ones with variable amounts of ice, rock, and refractory organics," Lisse said. "This is very much like the predicted recipe for the super-Earths seen in abundance in the Kepler planet survey. ... Much still has to happen, though, before these rings could become planets the size of the gas giants. Why it's taking so long to make outer planets in these systems—after their primordial gas disks have been stripped away—is a big mystery." 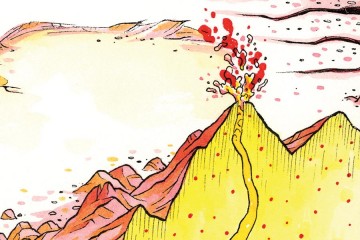 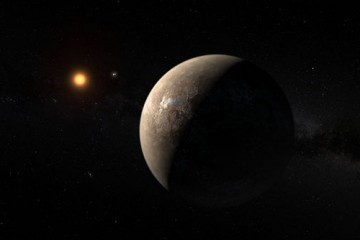