Salman Rushdie reads from his 13th novel, a 'panoramic social novel of our times' 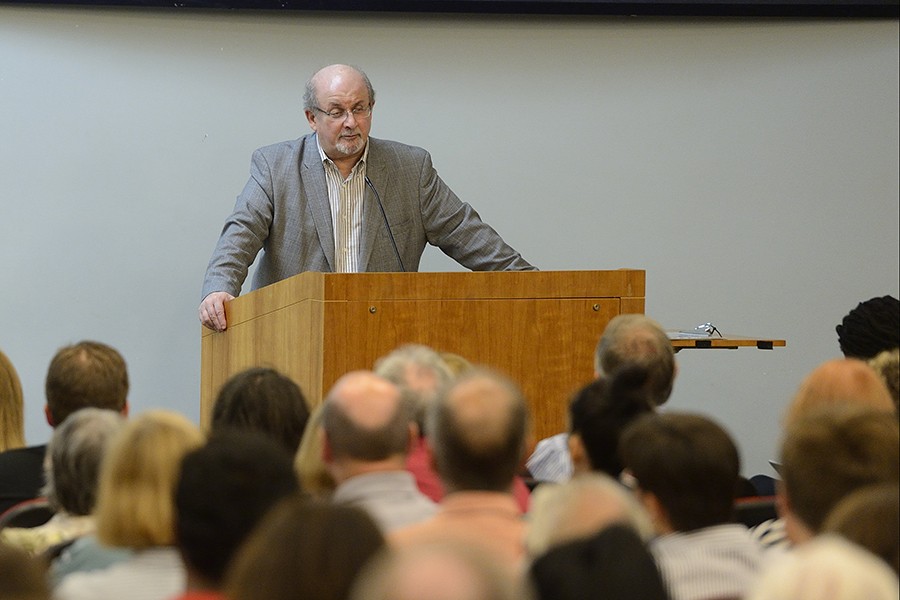 Image caption: Salman Rushdie, who spoke on the Homewood campus Tuesday, is the author of 13 novels, including Midnight's Children, which was awarded the Booker Prize in 1981

A common misconception, Salman Rushdie said of his novels, is that they are merely "concealed autobiographies."

"If you look at how different these books are, I must have had one hell of a life," Rushdie said at a reading at Johns Hopkins University on Tuesday night.

For his latest novel, The Golden House, Rushdie said he deliberately constructed characters outside of his own frame of reference, including a "25-year-old white boy" narrator, a transgender character, and another living with Asperger Syndrome.

The acclaimed British-Indian author shared bits of that just-published novel, his 13th, as part of JHU's President's Reading Series.

The book was a conscious turn to realism for Rushdie, a "panoramic social novel of our times," he said, that "wants to talk about what's in the air right now."

The epic tale of a family's attempt to reinvent themselves takes place in near-present Manhattan—in the Obama era, as a Donald Trump-like character, cast as villain, embarks upon a presidential run.

Rushdie's reading Tuesday introduced the central patriarch, Nero Golden, a wealthy septuagenarian who exudes "the unmistakable smell of crass, despotic danger." Along with his three sons, Golden has transplanted himself into an exclusive West Village neighborhood, with their "chameleon identities" and new names masking all reference points to the past. 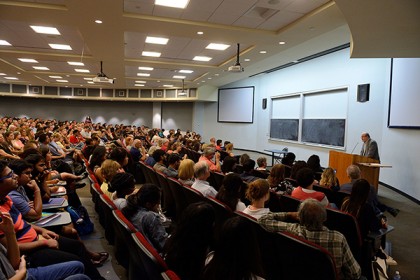 Image caption: The President's Reading Series aims to bring some of the world's best and most thought-provoking fiction, nonfiction, and poetry writers to Baltimore for readings

Rushdie also shared a later chapter shedding light on their backstory and its dark connections to the 2008 terrorist attacks in Mumbai.

Like The Great Gatsby, the new novel employs a peripheral narrator—here, a young filmmaker named René—whose understanding of the central family grows along with the reader's.

Creating this character required the 70-year-old Rushdie to enter "a very different mindset," he said, of the "kind of ambition and vanity and stupidity of a very young man."

Here, Rushdie said his prior journalistic investigations of the "defensive, vulnerable" transgender community in Mumbai informed him, along with experiences with two people he's known "quite closely" in New York who transitioned to new genders.

In Salman Rushdie's new novel, the backdrop is the Obama years

Rushdie veered from the novel during his talk to touch upon current political topics, including Trump's presidency and the protests surrounding his election. The author—who is now an American citizen and a Distinguished Writer in Residence at New York University—expressed disillusionment with the nearly 47 percent of the country who didn't vote in 2016.

When he mingled with a "very agitated" crowd of young protestors outside Trump Tower shortly after the election, Rushdie said, he pointedly asked if they'd voted—and saw "a shuffling of the feet and a lowering of the eyes."

"I asked them what the hell they were doing here," Rushdie said, recalling that he told the non-voters: "The actual demonstration was November the 8th, and you didn't show up for that one."

The writer responded off-handedly to a question about his past condemnation by Islamic fundamentalists—tracing back to reactions to the depiction of Islam in his 1988 book, The Satanic Verses.

Rushdie said he's been living "normally" in New York City, unaffected "for over two decades" by those past events, which included threats on his life.

"I take the subway, I go to Yankee Stadium," he said. "I do whatever people do." 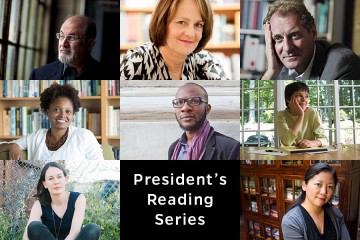 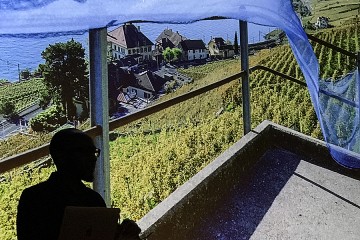 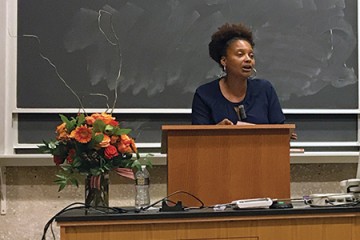