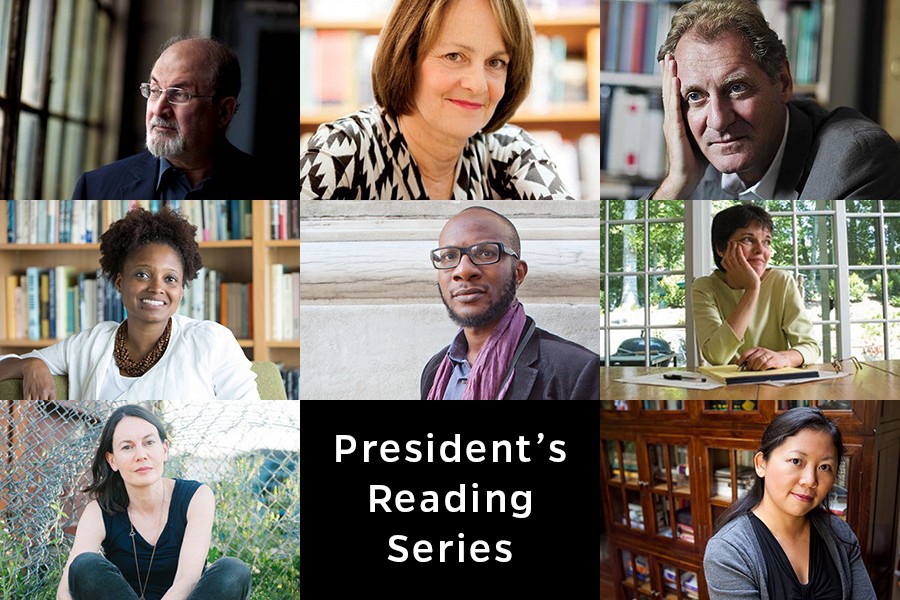 Johns Hopkins University will welcome eight noted authors to the Homewood campus this year for the annual President's Reading Series, beginning with a Sept. 26 visit from novelist Salman Rushdie.

The President's Reading Series program, which started in 2013 and is funded by university President Ronald J. Daniels, aims to bring some of the world's best and most thought-provoking fiction, nonfiction, and poetry writers to Baltimore for readings of their work. All of the readings are free and open to the public.

The scheduled speakers are:

Rushdie is the author of twelve novels: Grimus, Midnight's Children (which was awarded the Booker Prize in 1981), Shame, The Satanic Verses, Haroun and the Sea of Stories, The Moor's Last Sigh, The Ground Beneath Her Feet, Fury, Shalimar the Clown and The Enchantress of Florence, Luka and the Fire of Life, and most recently Two Years Eight Months and Twenty-Eight Nights. His newest novel, The Golden House, will be published by Random House in this month. Currently, Rushdie is a Distinguished Writer in Residence at New York University.

Salter is the author of seven books of poetry, most recently The Surveyors. A frequent reviewer and essayist, she is also a lyricist whose song cycle "Rooms of Light," with music by Fred Hersch, premiered at Lincoln Center in 2007. Her children's book The Moon Comes Home appeared in 1989; her play Falling Bodies premiered in 2004. She is also co-editor, with Margaret Ferguson and Jon Stallworthy, of The Norton Anthology of Poetry. Salter became a permanent member of the Writing Seminars faculty in 2007 after 23 years of teaching at Mount Holyoke College. She is co-chair of the department.

Motion is the author of 12 books of poetry, most recently Coming in to Land: Selected Poems 1975-2015. He has also written biographies (of John Keats and Philip Larkin, among others), and two novels (Silver and The New World) as well as a book of essays, Ways of Life. Motion was the UK Poet Laureate from 1999–2009, and is the co-founder and co-director of the Poetry Archive and Poetry by Heart; he was knighted for his services to poetry in 2009. Before joining the Writing Seminars, he was professor of creative writing at Royal Holloway College, University of London.

Smith is the author of the critically acclaimed memoir Ordinary Light and three books of poetry. Her collection Life on Mars won the 2012 Pulitzer Prize and was selected as a New York Times Notable Book. Duende won the 2006 James Laughlin Award from the Academy of American Poets and an Essence Literary Award. The Body's Question was the winner of the 2002 Cave Canem Poetry Prize. Smith was the recipient of a Rona Jaffe Writers Award in 2004 and a Whiting Award in 2005. In 2014 the Academy of American Poets awarded Smith with the Academy Fellowship, awarded to one poet each year to recognize distinguished poetic achievement. She is the Roger S. Berlind '52 Professor in the Humanities and director of the Creative Writing Program at Princeton University.

Cole was born in the U.S. in 1975 and raised in Nigeria. He is the author of two works of fiction: Every Day Is for the Thief, which was named a Book of the Year by The New York Times; and Open City, which won the PEN/Hemingway Award. His most recent books are the critically acclaimed essay collection Known and Strange Things and the synthesis of lyric and photography, Blind Spot. He is Distinguished Writer in Residence at Bard College and the photography critic for The New York Times Magazine.

A Reading By Alice McDermott and Katharine Noel

McDermott is the author of several novels, including After This, Child of My Heart, and Charming Billy, winner of the 1998 National Book Award. Her novels At Weddings and Wakes, That Night, and After This were all finalists for the Pulitzer Prize. McDermott lives with her family outside Washington, D.C. Her newest book, The Ninth Hour, will publish this month.

Noel's first novel, Halfway House, was a New York Times Editors' Choice, winner of a Ken/NAMI Award for "outstanding literary contributions to a better understanding of mental illness," and winner of the 2006 Kate Chopin prize for fiction. She has been the Writer in Residence at Claremont McKenna College and the Jones Lecturer at Stanford University, where she also held Wallace Stegner and Truman Capote fellowships. She lives with her husband, the writer Eric Puchner, and their children in Baltimore, where she teaches at Johns Hopkins and is at work on a new novel.

Yiyun Li grew up in Beijing and came to the United States in 1996. Her debut collection, A Thousand Years of Good Prayers, won the Frank O'Connor International Short Story Award, PEN/Hemingway Award, Guardian First Book Award, and California Book Award for first fiction. Her novel The Vagrants won the gold medal of California Book Award for fiction, and was shortlisted for the Dublin IMPAC Award. Gold Boy, Emerald Girl, her second collection, was a finalist of Story Prize and shortlisted for the Frank O'Connor International Short Story Award. Kinder Than Solitude, her latest novel, was published to critical acclaim. Her books have been translated into more than 20 languages.