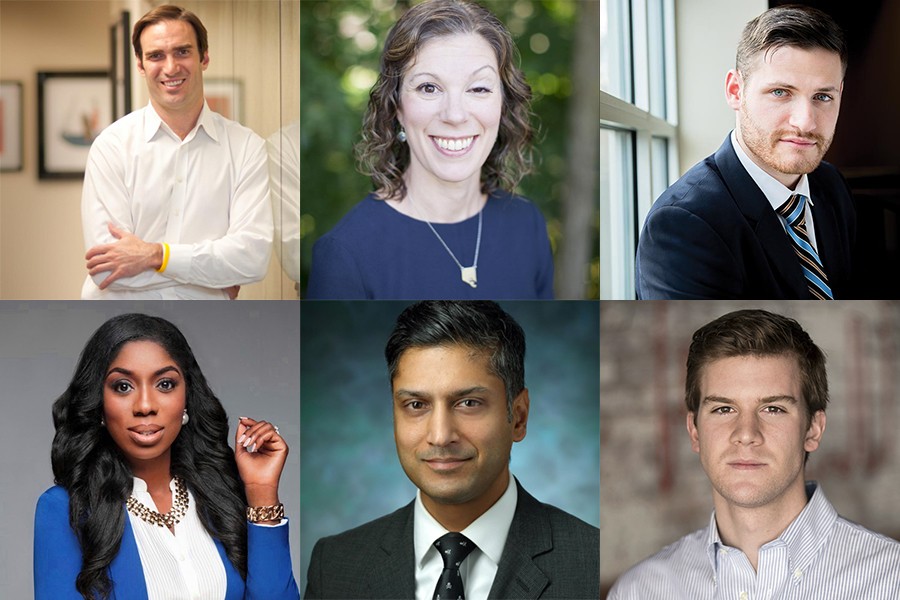 Image caption: The six from Hopkins who have been honored in the annual "40 Under 40" list compiled by the Baltimore Business Journal are: (top row, from left) John Avirett, Sarah Hemminger, and David Narrow; and (bottom row, from left) Wendy Osefo, Sashank Reddy, and David West

A number of local movers and shakers with ties to Johns Hopkins have landed on the "40 Under 40" list published by the Baltimore Business Journal.

The journal's annual list takes note of "innovators, professionals, and entrepreneurs in Greater Baltimore who have already made great strides before the age of 40," including developers, CEOs, educators, and nonprofit founders. A Nov. 16 ceremony will celebrate this year's batch of honorees, who were whittled down from 450 initial nominations.

More on the Johns Hopkins honorees:

John Avirett, a partner at Greenspring Associates, has helped steer the venture capital and equity firm through investments in GrubHub, Chewy, and Zulily, among many other rising companies. Avirett, who received his bachelor's degree in political science with a minor in economics from Hopkins, takes charge of sourcing and due diligence efforts at Greenspring while managing the firm's Portfolio Impact program.

Sarah Hemminger is co-founder and CEO of Thread, a social venture that connects underperforming high-schoolers in Baltimore with layers of volunteer support, including tutoring and meals. Last year the program also launched a "Conversation Thread" series bringing together more than 1,000 people for dialogues about Baltimore's needs that culminated in local service projects. At Hopkins, Hemminger studied engineering as an undergrad and went on to receive a PhD in medicine.

David Narrow started developing an innovative solution for postoperative blood clots while he was a graduate student at the Johns Hopkins Center for Bioengineering Innovation and Design. Now Narrow has turned this technology into a promising startup, Sonavex, that has raised more than $4 million and recently moved out of the FastForward Homewood innovation hub into its own office space in Canton.

Wendy Osefo, a professor of education at Hopkins and noted political commentator, is founder and CEO of The 1954 Equity Project. As an ode to the Brown v. Board of Education Supreme Court decision, the project provides resources and mentorship to help underrepresented minorities thrive in higher education. Osefo, who earned her master's degree in government at Hopkins, previously worked in the Obama administration's Antipoverty Initiative, including the D.C. Promise Neighborhood Initiative.

Sashank Reddy, who received his undergraduate degree from Hopkins, is CEO of LifeSprout, a startup developing new technology to address soft tissue caused by trauma, cancer, or aging. In their workspace at the FastForward accelerator, Reddy and a team of colleagues are creating an injectable synthetic material that mimics living tissue. Reddy is currently a resident in Plastic and Reconstructive Surgery at Hopkins.

David West started Proscia as a biomedical engineering student at the Whiting School of Engineering, aspiring to usher pathology data into the digital age. The startup, which has been described as a "game-changing company in digital pathology," is developing software to help researchers and pathologists analyze mountains of data in order to improve diagnosis and treatment of cancer. West's company—nurtured by Johns Hopkins Tech Ventures along with the Ralph S. O'Connor Undergraduate Entrepreneurship Fund—has secured nearly $2 million in outside capital over the past year.

Correction: An earlier version of this article misstated the number of Johns Hopkins degrees received by Sashank Reddy.

Published Sept 6, 2016
'Baltimore Business Journal' includes two with JHU ties among its '40 Under 40'