Maurice Portee, 27, felt abandoned. Following the 2015 death of Freddie Gray while in police custody, Portee and other young African-Americans in Baltimore "felt like everyone from outside swept into the neighborhood and brought water bottles, carrot sticks and celery, and all this other stuff, but as soon as the camera crews were gone and Geraldo Rivera had left, everyone else left too," explains Sarah Hemminger, Engr '02, Med '10 (PhD).

Hemminger was talking to Portee in her capacity as founder of Thread, a Baltimore program that matches underperforming high school students facing homelessness, poverty, violence, or other challenges with a team of volunteers who support them for years with everything from packed lunches to tutoring services. An alumnus of the program, Portee now serves on the organization's board of directors.

Recognizing that Baltimore remains a city segregated by race and class—and that interactions across those lines tend to be super­ficial—Hemminger and Thread participants decided to create a way for people from diverse backgrounds to come together in a deeper, more sustained way. "If you want people to live together in the same neighborhoods, send their kids to the same schools, go to church together—actually be part of the same community—they have to get to know each other," she says. And that can be difficult, even when people want it to happen. "What are you going to do? Drive to some other neighborhood and knock on doors and say, 'Do you want to be my friend?'" 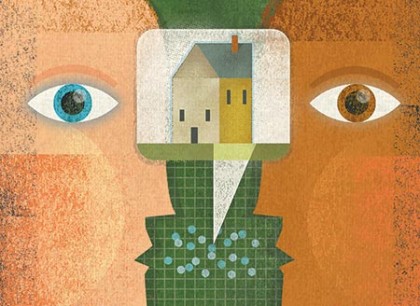 So the team created Conversation Thread, a four-event series that went on to bring together more than 1,000 people for dialogue about the city's needs and culminated with service projects on Giving Tuesday, a global event held November 29 to encourage giving in the holiday season. Participants first gathered in April 2016 for dinner in groups of 10 at 100 different homes and businesses throughout Baltimore. Nancy Wheeler, an artist and the president of Towsontowne Rotary Club, says she was curious and excited as she and her husband, Jim, approached the trendy office building where they would dine with eight strangers. As trained volunteers helped guide the conversation, she heard from a 16-year-old student in the Thread program who explained that even more than gifts like clothing or money, people in his community want connection. For Wheeler, this was a revelation; she says in the past, her Rotary Club would enter a community, complete a service project, teach recipients to continue the work, then leave.

"It has to continue," Wheeler realized. "The people who invest in the process of completing the project need to remain part of it." Another participant, Imhotep Simba, a program manager with the youth and family services nonprofit Concerned Black Men National, had his own breakthrough: Although he had worked and socialized with a cross section of Baltimore residents, the series was the first time he had been to a white person's house.

The groups met twice more for dinner, delving deeper into issues like how racism, sexism, and other prejudices have affected them—for example, why some people in the predominantly white suburbs of Baltimore feel afraid to venture downtown. On Giving Tuesday, they met for the final Conversation Thread event to carry out service projects, from serving meals to the homeless to decorating senior centers for the holidays.

The organizers are still discussing whether they'll embark on Round Two. "Organizing the logistics of 100 dinners all happening at 100 locations at the same time was a huge undertaking," Hemminger says. Regardless, the project could help grow the parent Thread program, she says. Thread will serve 303 high school students and alumni and engage 1,100 volunteers and collaborators across Baltimore this year, but the goal is to work with 5 percent of the city's high school freshmen—more than 3,000 students. That would require 7,000 more volunteers. The hope is that the training given to the Thread volunteers who helped facilitate conversations throughout the series has prepared them to take on leadership roles—thereby equipping the Thread program to scale up.

Hemminger says she regularly hears from participants on how the friendships established during the series continue to evolve. "I get emails weekly, still, from participants who say, 'I got together with my group this week. We hung out and watched the Ravens game,' or, 'We went out to dinner,'" Hemminger says. In Wheeler's case, her Rotary Club helped her Thread group carry out its service project at a new women's program at an addiction recovery treatment center downtown, and the club has since committed to helping out with the program long term. "The end goal wasn't the actions," Hemminger says, "but making the relationships solidified enough that they've taken on a life of their own beyond the arc."