William J.L. Sladen, a longtime Johns Hopkins faculty member and expert in comparative behavior and ecology, died May 29 in Warrenton, Virginia. He was 96 years old. 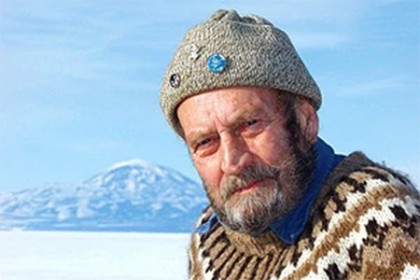 Born in 1920 in Wales, Sladen was a teacher, an Antarctic explorer, and "a physician by training and zoologist by choice," according to his obituary in The New York Times. He served as a faculty member in the Department of Pathobiology in what is now the Johns Hopkins Bloomberg School of Public Health from 1957 to 1983, mentoring graduate, doctoral, and postdoctoral students.

Sladen first journeyed to Antarctica as a medical officer and amateur biologist with a British expedition in 1948. He later focused much of his research on Antarctic penguins and other marine life, banding Antarctic sea birds to track their population growth and migration. In other cold climates, he studied the population dynamics, diseases, and behavior of the Alaskan fur seal.

Notably, he helped lead research into the migratory patterns of young Canada geese in the early 1990s, teaming with artist and pilot William Lishman to teach migration routes to orphaned geese using ultralight aircraft. The experiment was dramatized in the 1996 film Fly Away Home.

His work with animals and their behaviors contributed to a better understanding of the impact of human behaviors on ecosystems, The New York Times reports. For example, the migration study had the added benefit of mapping bird flight routes to prevent collisions with airplanes, and Sladen's 1964 discovery of residual DDT in Antarctic penguins and seals helped convince the EPA to ban the pesticide.

In 1966, Sladen received funding from the National Geographic Society to establish a field research station at the Smithsonian Institution's Chesapeake Bay Center for Field Biology in Edgewater, Maryland, where he conducted research on whistling swans (also known as tundra swans). He later founded Environmental Studies on the Piedmont, a wildlife reserve in Virginia that researches native North American birds and preserves their habitats.

More from his obituary in The New York Times:

"Some of my friends have puzzled over my giving up a medical career for studies in conservation and environmental health," Dr. Sladen wrote in National Geographic in 1975. But he never second-guessed himself.

His response, he said, was, "Wouldn't they perhaps trade whatever they are doing to witness the spectacle of 300,000 Adélie penguins in Antarctica, to round up thousands of pink-footed geese in Iceland, to sit among harems of fur seals on the Pribilof Islands in the Bering Sea, or to take inspiration from the wandering albatross as it soars majestically above the southern oceans?"

He is survived by his wife, two children, and two grandchildren.