Spacecraft's flight to Jupiter, with APL-built instrument on board, is mission of 'pure discovery' 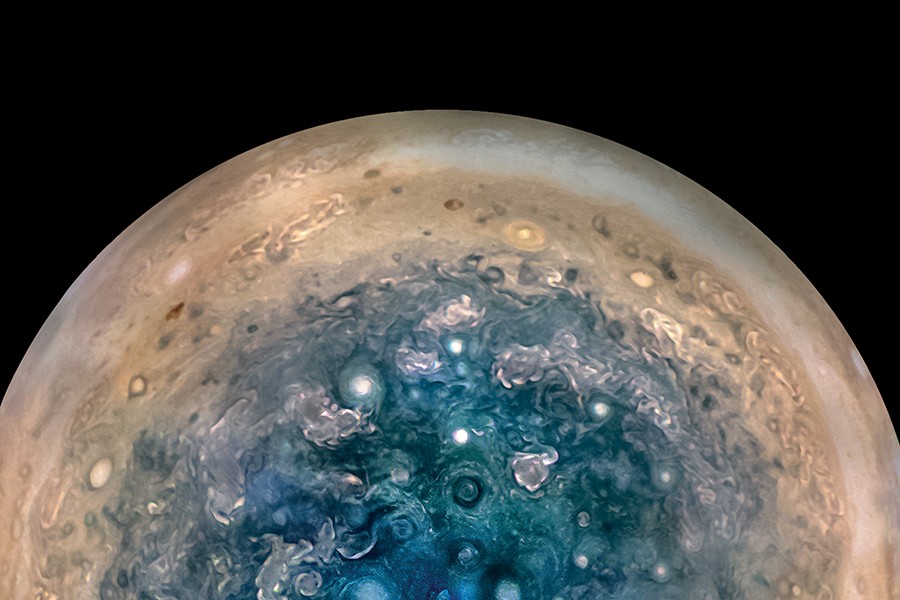 Image caption: Image shows Jupiter’s south pole as seen by NASA’s Juno spacecraft from an altitude of 32,000 miles. The oval features are cyclones, up to 600 miles in diameter.

It took just one dive over the north pole of Jupiter before scientists on NASA's Juno mission knew they were on to something incredible.

After an almost five-year journey to the solar system's largest planet, the Juno spacecraft—carrying an instrument suite that includes the Jupiter Energetic Particle Detector Instrument, built by the Johns Hopkins Applied Physics Laboratory—entered Jupiter's orbit on July 4, 2016. In late August that year, Juno passed just 2,600 miles over the planet's swirling cloud tops, and detected features in Jupiter's atmosphere and magnetic field that surprised and excited the JEDI team.

"This is pure discovery," said Barry Mauk, the JEDI principal investigator from APL in Laurel, Maryland. "We're flying on a path over Jupiter's poles that no spacecraft has traversed before, and by directly sampling this dynamic environment for the first time, we're seeing features that are complete surprises."

"There seem to be a lot of dynamic processes going on above Jupiter's aurora that pump a lot of energy into the atmosphere. We're not sure why the processes are different than what we might see at Earth ... but it's something we can't wait to figure out."
George Clark
JEDI team member

One of Juno's several goals is to understand how the rapidly spinning Jupiter controls and impacts its near-space environment, particularly in the polar regions. Dramatic signatures of that control are the Jovian northern and southern lights—the most powerful aurora in the solar system.

These early findings have been published online by the journals Science and Geophysical Research Letters. Among them is JEDI's observation of upward-directed electron beams filling the polar cap regions above the main aurora. These beams inexplicably extend to energies greater than 1 million electron volts. Within the main auroral regions, JEDI also observed sufficient downward electron energy flux to power the observed extreme auroral intensities, but with electron distribution characteristics that were completely unanticipated after observations of Earth's aurora.

"There seem to be a lot of dynamic processes going on above Jupiter's aurora that pump a lot of energy into the atmosphere," said George Clark, a JEDI team member from APL and author and co-author of many GRL papers. "We're not sure why the processes are different than what we might see at Earth, for example, or elsewhere in the solar system, but it's something we can't wait to figure out."

APL's instruments have also been central to quantifying the high-latitude radiation environment, to measuring the source particles that cause planetary x-rays, and in mapping out a new radiation belt, likely inward of Jupiter's main gossamer ring—an unusual finding given that most models indicate such heavy ions have trouble penetrating a planet's ring system.

A principal goal of Juno is to understand the origin and evolution of Jupiter. With nine science instruments, Juno is investigating the existence of a solid planetary core, mapping Jupiter's intense magnetic field, measuring the amount of water and ammonia in the deep atmosphere, and observing the planet's auroras. JEDI itself is measuring charged particles accelerated to high energies within Jupiter's magnetosphere, allowing researchers to study how their interaction with Jupiter's atmosphere generates the most powerful aurora in the solar system.