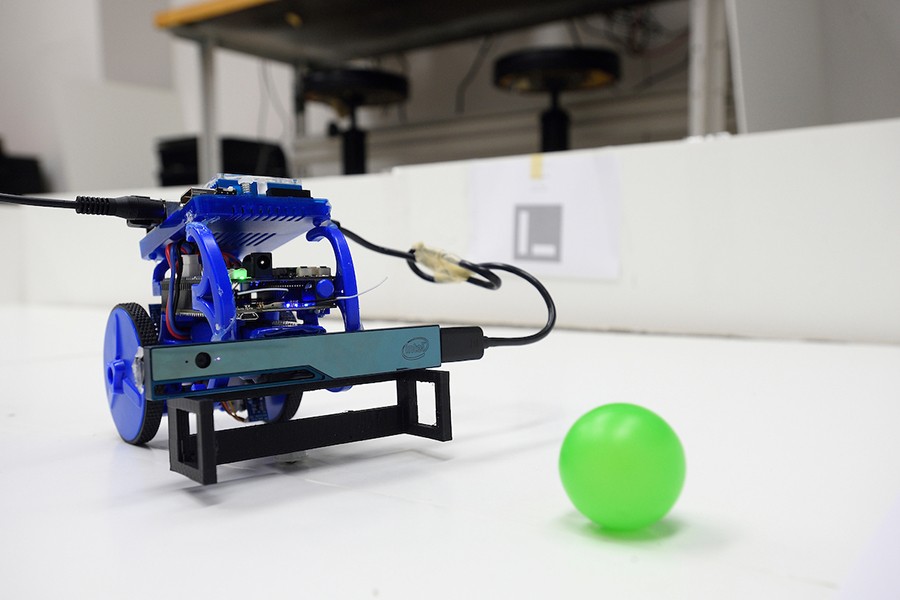 The player approaches the ball and prepares to score the goal. The crowd waits anxiously.

The player isn't David Beckham or Cristiano Ronaldo—it's a small, blue EduMIP mobile robot. And it's not the final moments of the World Cup. Instead, it's a robotics demonstration in a lab on the campus of Johns Hopkins University Whiting School of Engineering.

While the stakes aren't quite as high, these demonstrations are still nerve-wracking for students in the graduate-level Robot Systems Programming course.

"Not all the demos work out perfectly, and that's OK. But you have to try," said Louis Whitcomb, chair of the Department of Mechanical Engineering who created and has taught the course for the past four years. Despite many hours of planning, building, and testing the robots, students know that at any given moment, things may not go as planned.

Students in his course spent the last five weeks of the spring semester building and programming their own independent robotic projects. Whitcomb provides equipment and instruction but encourages students to experiment and set their own project goals. On Monday and Tuesday, 12 student teams demonstrated their robots in labs across the Homewood campus.

Students Andrew Dykman, Saurabh Singh, and Allen Jiang built a system that allows five separate EduMIP robots to communicate, move into a swarm formation, and work together to achieve complex tasks. During the demonstration, the team explained how, with some fine tuning, this technology could have many real-world applications.

"Take, for example, self-driving cars," Dykman said. "If every car on the road is running automated systems and communicating with cars around it, we could move cars at a higher speed without crashing, or reduce traffic jams by eliminating human errors."

For their project, students Kevin Yee and Nicole Ortega decided to take a favorite pastime to the next level.

The pair created a platform that allows users to play chess against a chess engine on a physical board. They built a mobile robot, equipped with an end effector, that can make strategic moves and place chess pieces on target locations. According to Ortega, the robot usually wins.

Other demos included robots that can locate a soccer ball and score goals, a ball-catching robotic arm, a "self-standing" robot that can leap across obstacles, a team of robots that can map a location, and autonomous quadcoptors.

The Robot Systems Programming course gives students the tools to create their own unique vision of what a robot can do. Some will graduate next week and enter the field, and some will continue graduate work in robotics. Either way, Whitcomb said he hopes his students will use these skills to continue to explore what's possible in robotics.

"This course is intended to be a capstone experience for our advanced undergraduate and graduate robotics students," he said, "in which they use and apply the knowledge they have learned in the mathematics, engineering, and physics of robotics to develop real-world robots that can sense and interact with people and the world." 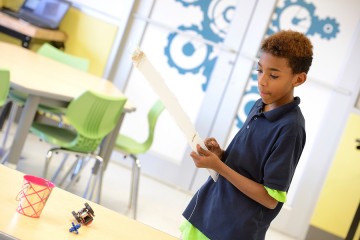 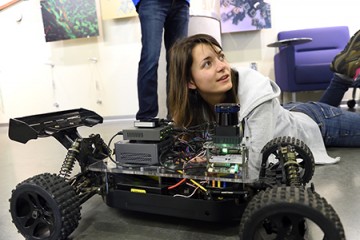