Astronaut Kate Rubins, the first person to ever sequence DNA in space, will touch down at Johns Hopkins University on Monday, April 24, to discuss experiments she conducted aboard the International Space Station and to share her experiences as an astronaut. 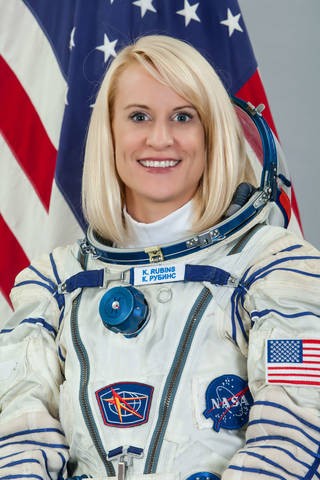 Rubins performed her DNA sequencing in August of last year with samples prepared in a Johns Hopkins lab at the School of Medicine by Bloomberg Distinguished Professor Andrew Feinberg and postdoctoral fellow Lindsay Rizzardi, among others. The samples were sent to the ISS within a SpaceX Dragon supply capsule.

Launched aboard a Soyuz rocket, Rubins successfully sequenced samples of mouse, bacteria, and virus DNA in microgravity during ISS Expeditions 48 and 49, during which she spent 115 days in space and conducted two spacewalks totaling 12 hours and 46 minutes. Rubins, a microbiologist with a PhD in cancer biology, used a small, customized tool to conduct the DNA sequencing called the MinION. The USB-powered device can perform a sequencing run in as little as 10 minutes and has been used in field labs in some of the most remote locations on earth.

Rubins' work aboard the ISS helps scientists to better understanding the process for sequencing DNA in microgravity to measure the effects of spaceflight on the human body. As a result of her experiments, scientists may also be better equipped to diagnose diseases on extremely long space flights.

The talk is sponsored by Space@Hopkins, which is directed by Bloomberg Distinguished Professor Chuck Bennett with PhD candidate Kirsten Hall as the Space Fellow. The effort knits together the diverse space research activities at Johns Hopkins and celebrates the university's rich history with space studies, from Professor Henry Rowland's 1883 invention of a basic tool for observations in space to the New Horizons mission to Pluto led by the university's Applied Physics Lab. Space@Hopkins also offers seed grant opportunities, with the 2017 program now open for applications.

Rubins' free talk and reception take place at 4 p.m. on Monday in Schafler Auditorium in the Bloomberg Center for Physics and Astronomy. Reserve your seat online in advance or email spacestudies@jhu.edu.