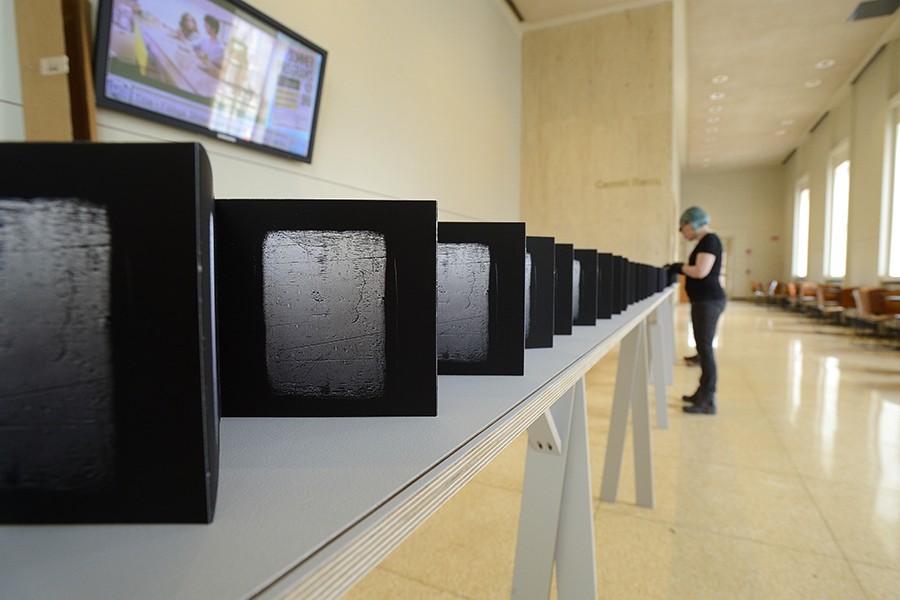 Image caption: Jay Gould's exhibition, created during his time as an artist in residence at the Hopkins Extreme Materials Institute, includes an accordion book of 180 time-lapse images that that capture 32 microseconds of magnesium cracking under high-speed impact.

Photographer Jay Gould has mounted an exhibition at Johns Hopkins University's Milton S. Eisenhower Library of work that he made as a record of a recent cross-cultural expedition.

The professor of photography at the Maryland Institute College of Art spent about a year in another world where the inhabitants sometimes speak a different language, write in arcane code, focus deeply on the finest points of literally Earth-shaking problems and, as they themselves acknowledge, often have trouble communicating with outsiders.

The show of some 40 pieces and videos opening this week and running through May 19 on the library's "Q" level represents a portion of Gould's response to his experience at the Hopkins Extreme Materials Institute, or HEMI. Gould spent months sitting in on researchers' meetings; visiting laboratories; and talking about science, art, and communication as the first artist-in-residence in the HEMI/MICA Extreme Arts Program. The collaboration between HEMI—where they study how things physically come apart—and MICA—where they study how things aesthetically come together—is marking its third year with its first exhibition.

"It's exciting, it's a great spot to show this work," said Gould, who spent the weekend setting up the show composed chiefly of photographs in different media and wildly varying sizes—from postcard-sized tintypes to a King Kong-scale human fingertip on which rests a perfectly cubed meteorite sample no bigger across than a Tic Tac.

The show centerpiece is an object in three dimensions conveying an impossibly short snap of time: 32 microseconds, or less than a ten-thousandth the duration of an eye blink. In Gould's "accordion" book, this instant unfolds in 180 time-lapse images taken in laser light with an ultra-high-speed camera during a HEMI experiment. The exhibition display is 24-feet long, but at full length, the "accordion" book showing a tiny sample of magnesium cracking under high-speed impact stretches to about 90 feet.

The scales of time and size that HEMI engineers work with are only part of the complexity of what they do there. That complexity is part of why the people at HEMI had the idea to open their doors to MICA in hopes of finding ways to explain their work to people who are not engineers, especially as their research is meant to eventually have a practical application.

"Engineers believe in laws and tenets and how their analyses fit within that framework. The artist is more willing to explore."
Lori Graham-Brady
HEMI associate director

Established in 2012 with a grant from the U.S. Army, HEMI researches how materials react under extreme conditions, such as being hit by a projectile, or during an explosion. Part of the research is ultimately meant to help the military develop stronger armor for soldiers and vehicles. HEMI also works on understanding how asteroids break apart in an effort to help protect against catastrophic Earth impacts from space.

K.T. Ramesh, a professor of mechanical engineering at the Whiting School of Engineering and director of HEMI, said the students and faculty engineers are well set up to look very closely at complex events—such as a chunk of metal breaking apart—when there are many things going on at once.

"But then our problem after we've seen it is, how do we explain that? It's a complicated problem," Ramesh said. "How do we explain that to somebody who is going to potentially be interested in the application part of this? … That explanation is not something we are generally good at as scientists or engineers."

For that part, Ramesh said he and other HEMI officials felt that it would help to work with people focused on expression and communication. Artists, for instance.

"In some ways what the artist does is very much like what we in the sciences think of as visualization, data visualization," Ramesh said. 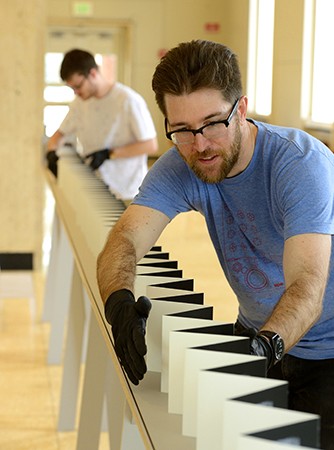 Ramesh and Lori Graham-Brady, a Johns Hopkins professor of civil engineering and associate director of HEMI, hatched the idea of collaborating with MICA in a conversation a few years ago. Perhaps, they thought, their engineers might benefit by interacting with people who think in very different ways.

"The artist is more willing to explore," Graham-Brady said. "Engineers believe in laws and tenets and how their analyses fit within that framework."

The meeting of cultures, she said, is "almost like an anthropological study."

So far, two groups of MICA students have completed internships at HEMI. A third group is to start this summer, followed in the fall by a second artist-in-residence, Kimberly Hall, a professor in MICA's Illustration Practice MFA Program.

Gould said he's inclined to create visual analogies in his photographs, but the HEMI experience—especially the time-lapse photographs of the high-speed impact experiment—sometimes overwhelmed his ability to do that.

Instead, the super-speed time-lapse seemed a model for infinity, for paring time into ever thinner slices forever.

The "accordion" book, and other pieces in the show, pays homage to the complexity of HEMI's work, and its appeal to the imagination.

"A lot of my work acts as kind of a shrine to an idea," Gould said.

Correction: Lori Graham-Brady's title at HEMI was misstated in an earlier version of this article. The Hub regrets the error.