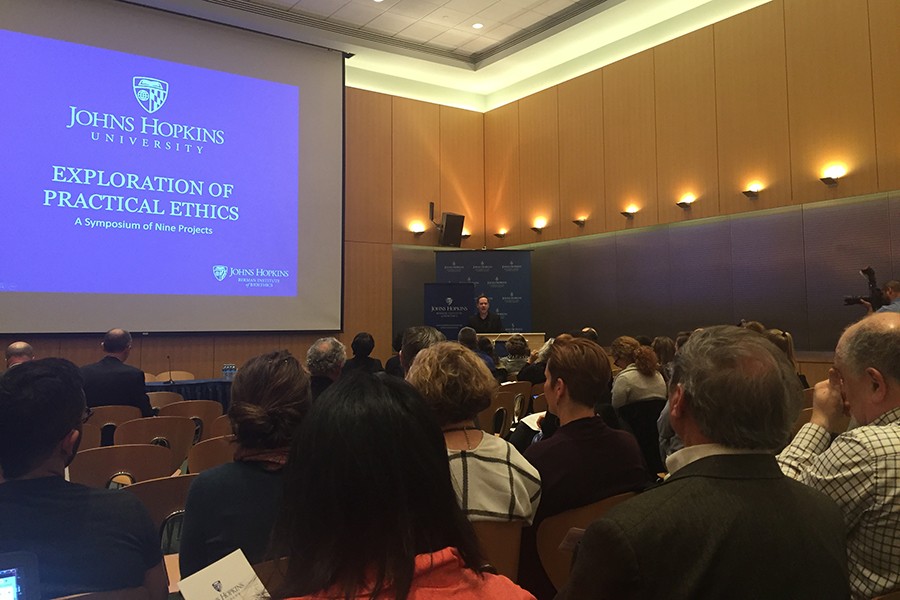 "Why is it that most of the university's focus on contemporary ethical issues is concentrated on health care, public health, and the biomedical sciences? Surely other professions and other disciplines also face important real world ethical issues—shouldn't Hopkins faculty, staff, and students be addressing these issues as well?"

That question, posed by Johns Hopkins University trustee Andreas Dracopoulos to the Berman Institute of Bioethics, helped inspire and drive the JHU Exploration of Practical Ethics program, a grant program to fund research into interdisciplinary fields of ethics.

"It is easy for us to stay away from issues like what we're talking about today. But it is important for us to grapple with these issues in a thoughtful way, and to have our own thought leaders come together."
Sunil Kumar, JHU provost

The program provided funds for nine projects—some of which are still under way—that examine issues relating to criminal justice, higher education, economics, and environmentalism. At a symposium Tuesday, those projects were presented to members of the university community.

"Andreas' provocative question—and it was provocative—set in motion a process of exploration among university leadership initiated by [JHU] President [Ronald J.] Daniels," said Ruth Faden, the former director of the Berman Institute, in her remarks opening the symposium. "The goal of this process is to assess whether the university should expand its footprint beyond the traditional territories of bioethics and take on the full range of ethical challenges facing society."

Some of the projects centered on ethical dilemmas surrounding climate change and pollution. Anthropologist Anand Pandian's project leads an undergraduate class in exploring the effects of pollution on the environment. He included a short film featuring disposable plastic bottles, food wrappers, scattered plastic debris, and a baby bottle littering a coast.

Bioethicist Elizabeth Fox, presenting on behalf of principal investigator Jessica Fanzo, described the ethical fallout of climate change and unpredictable weather patterns on nomadic herding communities in Africa, which increasingly seek alternative forms of employment—including the drug trade—in order to support themselves and their families.

Other projects focused on the ethics of higher education, with pilot programs and case studies conducted on the Johns Hopkins University campus or with alumni.

Feilim Mac Gabhann, along with Israel Gannot and Debra Mathews, created an ethics course for engineering undergrads. The course requirements include an online component on the philosophies of different schools of ethics and an in-person module allowing for deep dives on rotating ethical topics. The pilot class was a success, scoring above expectations on student evaluations.

Beverly Silver and Dan Pasciuti examined traditional forms of university-community engagement and developed curricula to move from what they called service models to engaged models, which deepen community ties in the U.S. and abroad.

Andrew Talle and Erik Helzer—a cross-disciplinary team from the Peabody Institute and the Carey Business School, respectively—examined alumni surveys to discover that Peabody alumni, though more likely to earn lower salaries, report higher life satisfaction compared to an internet sample of the general population. As they continue to conduct their research, they have formulated theories and questions about the correlation between specialized training—specifically in creative fields—and a reported increase overall life satisfaction.

Other groups focused on the ethics of specific societal issues.

Mario Macis, Vikram Chib, and Berman Institute Director Jeffrey Kahn developed a lab test to measure the rates at which people will withstand electric shocks in exchange for money. Though no tests have yet been performed, they hope to extrapolate their findings to address the ethics of paying organ donors, which is currently illegal.

Lindsay Thompson, Sylvia Long-Tolbert, and Cynda Hylton Rushton examined "wicked workplaces," or employers that require a range of moral compromises from their employees. They cited Wells Fargo Bank, which is being sued by former employees who were fired for not using high-pressure tactics with bank customers. They discovered that employees have a fair amount of moral elasticity, and seek more evidence about that resiliency.

Peabody composer Judah Adashi debuted a segment of his new composition, Unseen: Kalief Browder, Mass Incarceration, and Solitary Confinement. The piece grapples with issues of the prison-industrial complex and the disproportionate effect it has on communities of color. He also discussed the Art and Activism workshop he launched at Peabody to encourage students to engage with issues of social justice.

And sociologist Ryan Calder examined the ethics of Shariah banking institutions, which ban the collection of interest, excessively risky investments, and other practices that have become part of western finance. He gathered evidence suggesting that proceeds from Islamic banks support social causes and charitable organizations, and that certain Shariah banking practices could help stabilize or even prevent financial crises.

After the symposium presentations, JHU Provost Sunil Kumar spoke in praise of the projects.

"It is easy for us to stay away from issues like what we're talking about today," Kumar said. "But it is important for us to grapple with these issues in a thoughtful way, and to have our own thought leaders come together."

Kumar also announced that the JHU Exploration of Practical Ethics program would receive a second year of internal funding. The program's first year was funded by Dracopoulos, the offices of the president and provost, the Berman Institute, and six Hopkins divisions: the Carey Business School, the Krieger School of Arts and Sciences, the Peabody Institute, the School of Advanced International Studies, the School of Education, and the Whiting School of Engineering. Maria Merritt, associate professor in the Berman Institute and the Bloomberg School of Public Health, has been serving as program officer to administer the first portfolio of funded projects and will continue to do so for the second round. 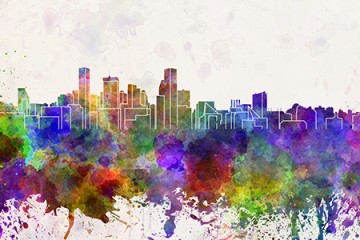