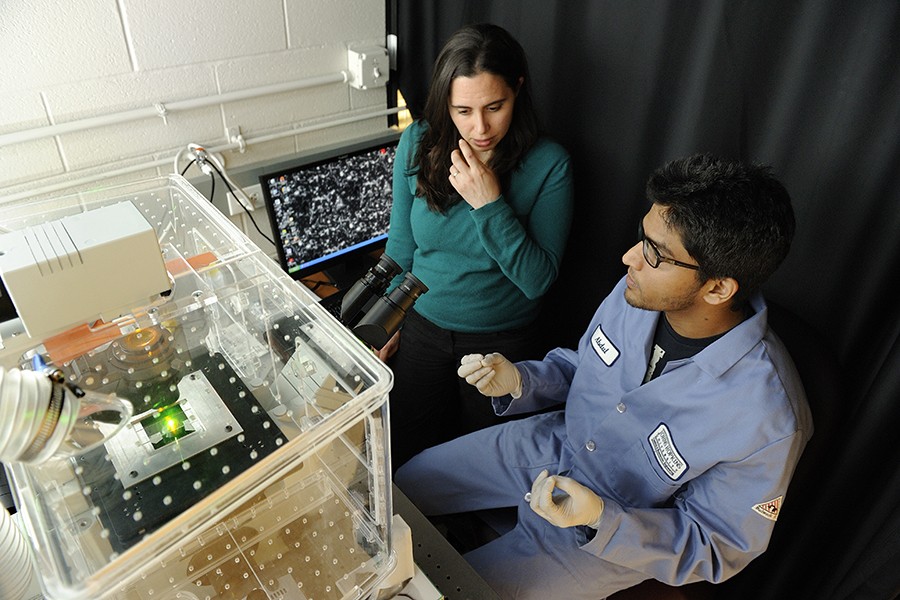 In a microscopic feat that resembled a high-wire circus act, Johns Hopkins researchers have coaxed DNA nanotubes to assemble themselves into bridge-like structures arched between two molecular landmarks on the surface of a lab dish and also captured examples of this unusual nanoscale performance on video.

This self-assembling bridge process, which may someday be used to connect electronic medical devices to living cells, was reported by the team recently in the journal Nature Nanotechnology.

To describe this process, senior author Rebecca Schulman, an assistant professor of chemical and biomolecular engineering in the university's Whiting School of Engineering, referred to a death-defying stunt shown in the movie "Man on Wire." The film depicted Philippe Petit's 1974 high-wire walk between the World Trade Center's Twin Towers.

Schulman pointed out that the real-life crossing could not have been accomplished without a critical piece of old-fashioned engineering: Petit's hidden partner used a bow and arrow to launch the wire across the chasm between the towers, allowing it to be secured to each structure.

"A feat like that was hard to do on a human scale," Schulman said. "Could we ask molecules to do the same thing? Could we get molecules to build a 'bridge' between other molecules or landmarks on existing structures?"

Molecular bridge-building could be used to understand nerve cell communication, or to deliver therapeutics with unprecedented precision.

The paper's lead author, Abdul Mohammed, a postdoctoral fellow in Schulman's lab, used another analogy to describe the molecular bridge-building feat: "If this process were to happen at the human scale," Mohammed said, "it would be like one person casting a fishing line from one side of a football field and trying to hook a person standing on the other side."

To accomplish this task, the researchers turned to DNA nanotubes. These microscopic building blocks, formed by short sequences of synthetic DNA, have become popular materials in the emerging nanotechnology construction field. The sequences are particularly useful because of their ability to assemble themselves into long, tube-like structures known as DNA nanotubes.

In the Johns Hopkins study, these building blocks attached themselves to separate molecular anchor posts, representing where the connecting bridge would begin and end. The segments formed two nanotube chains, each one extending away from its anchor post. Then, like spaghetti in a pot of boiling water, the lengthening nanotube chains wriggled about, exploring their surroundings in a random fashion. Eventually, this movement allowed the ends of the two separate nanotube strands to make contact with one another and snap together to form a single connecting bridge span.

To learn more about how this process occurs, the researchers used microscopes to watch the nanotubes link to their molecular landmarks, which were labeled with different-colored fluorescent dyes and attached to transparent glass. The team's video equipment also captured the formation of nanotube spans, as the two bridge segments lengthened and ultimately connected. Completion of each nanoscale bridge in the accompanying example took about six hours, but the team's videos were sped up significantly to enable a more rapid review. Depending on how far apart the molecular anchor posts were located, the connection process took anywhere from several hours to two days.

The ability to assemble these bridges, the researchers say, suggests a new way to build medical devices that use wires, channels, or other devices that could "plug in" to molecules on a cell's surface. Molecular bridge-building could be used to understand nerve cell communication, or to deliver therapeutics with unprecedented precision. Such technologies, the researchers said, could be a step toward building networked devices and "cities" at the nanoscale, enabling new components of a machine or factory to communicate with one another.