"We want to make sure that people realize you can have a level-headed discussion and get somewhere productive at the end of your discussion, not just having a yelling match with each other."
Zack Tipton, IDEAL vice president

JHUnions, the College Democrats, the College Republicans, and IDEAL hosted the viewing party as part of a series of nonpartisan events ahead of the Nov. 8 general election. Event hosts collectively said the goal of the debate viewing parties is to provide a safe and friendly environment to discuss politics, regardless of political affiliation.

"We prefer to collaborate with all groups to try to create an environment where everyone feels that their ideas are valued," said Aaron Pultman, vice president of the College Democrats. "Being co-hosted by a group like IDEAL, which is nonpartisan, by the Democrats and the Republicans, really makes a Hopkins student feel they have a place here. No one feels like they should be excluded from this process."

During the debate, two screens provided students with the ability to watch the debate alongside PolitiFact's live fact-checking, both candidate's platforms, and various news articles on topics referenced by the candidates. Some of these topics included the U.S. Supreme Court, the Second Amendment, immigration, the economy, foreign policy, and fitness to be president. The candidates' comments on the aforementioned topics were expansive and often contrasting.

Zack Tipton, vice president of IDEAL, said that with the vast differences among today's political opinions, its important to present all points of view to students.

"In this era of politics, it's become so polarized," Tipton said. "We want to make sure that people realize you can have a level-headed discussion and get somewhere productive at the end of your discussion, not just having a yelling match with each other."

Despite some nods, shaking heads, laughs, and gasps during a few of last night's remarks, viewers were relatively quiet and invested in the watching the debate.

Free pizza, stickers, and #BlueJaysVote shirts were passed out to everyone that attended—a mix of JHU community members with differing political views.

"I think it's important … that we show, especially on a college campus, that we can become a united front despite political differences," said Rachel Mueller, president of the JHU College Republicans. "It's important to know that students don't feel isolated because of their political beliefs." 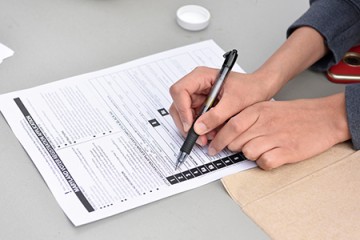 For new voters, an intro to presidential politics