For first-time voters, an informed introduction to the presidential electorate

But for Liam Haviv, the experience of serving as a Senate page during this particular congressional session was nothing short of rewarding. In fact, it left him with a lasting appreciation for intellectual discussion of political issues among peers with differing opinions and backgrounds.

"We wanted to create a space where ... we weren't afraid to separate ourselves from the politics and the people, and really look at what's going on in order to dissect it."
Liam Haviv, IDEAL founder

After returning home from his semester in Washington, D.C., Haviv sat in his AP English Literature class and attempted to write an essay about the Decline of Radicalism by Daniel J. Boorstin. In the prompt, Boorstin explained the difference between dissent and disagreement, and said that the former is a great problem in America.

Haviv circled the word "dissent" throughout the prompt and jotted down what he thought was the outline of an essay about voting. But what he produced was something much more in-depth, a vision for an organization that aims to improve students' outlooks on politics.

His essay that day led to the creation of IDEAL—short for inform, discuss, enlighten, acknowledge, and learn—a pending non-profit that has grown to eight chapters at high schools and universities in six states.

"Your parents say this, your friends say this, everybody is saying something, and you really have no idea where to go with it. And our generation is notoriously mistrusting," said Haviv, now a Johns Hopkins senior majoring in political science and philosophy. "So we wanted to create a space where we could explore it, and could leave friends, but that we weren't afraid to separate ourselves from the politics and the people, and really look at what's going on in order to dissect it."

IDEAL chapters work to provide students at their respective schools with information on current political happenings and are "responsible for maintaining an environment that promotes civil discussion that enables students to feel comfortable exploring their political identity," according to the organization's website.

Haviv is the founder and CEO of the national organization, and he also serves as the president of JHU's chapter.

IDEAL at JHU has held a series of events to encourage voter awareness and responsibility on the Homewood campus ahead of the Nov. 8 general election. The group has hosted "informed discussions," during which IDEAL sponsors a guest speaker and proctors debates on a political issue. 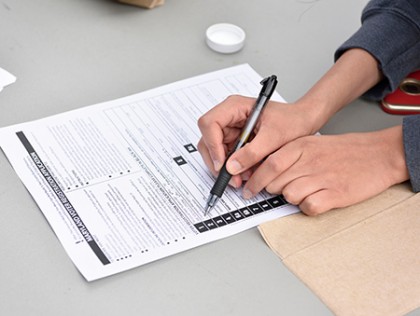 Image caption: A Johns Hopkins student fills out a voter registration form during an event hosted by IDEAL.

A recent session focused on domestic policy. Upcoming session topics include American foreign policy (Oct. 20) and the U.S. economy (Oct. 27), and the group will also hold a pre-election day Q&A on Nov. 3.

"The idea is to create an environment where students respect and appreciate the process of engaging in difficult political questions, and spend time engaging with texts, with the issues, and with each other," according to IDEAL's website.

IDEAL's writing team compiles and publishes information about candidates and their platforms online. These writings are designed to give students an unbiased and impartial view of where candidates stand on certain issues, Haviv said.

The group has also led voter registration efforts in advance of next month's election. The deadline to register to vote in Maryland is today (Oct. 18); deadlines in many states have already passed.

"Since so many of our students are—for the first time in their lives—eligible to vote, it's very important for them to be aware of how they can contribute to the political process by registering to vote and completing absentee ballots for their home states," said Tiffany Sanchez, JHU's associate dean of student engagement.

"IDEAL has done an amazing job working with members of the university staff and administration as well as students to increase awareness about the political process and in working to ensure that staff and students, in particular, are registered to vote."

Their work also includes encouraging students to challenge their own beliefs and to overcome apathy about the election. Many students, unmoved by the choices or turned off by the divisive tone of the presidential campaign, are left frustrated with the election as a whole, Haviv said.

Will Hubsch, a sophomore international studies major and IDEAL's secretary of communication, said he joined the organization because he wanted to get involved politically without the pressure to take a side. He has since worked at voter registration events on campus and said that it is an important responsibility for students to vote.