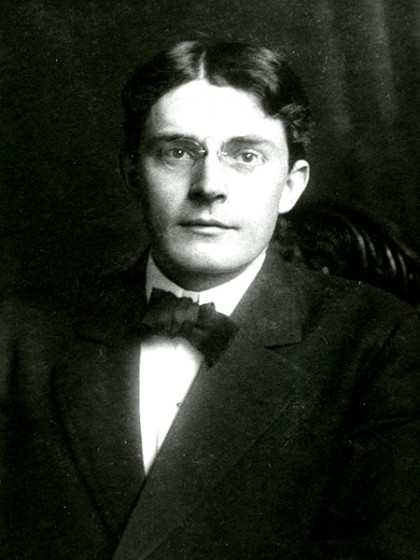 A rather unusual permit application resides in the Records of the Office of the President in the Johns Hopkins University Archives.

In April 1920, Professor John B. Watson, a psychologist credited as the father of behaviorism, applied for a permit to purchase 34 gallons of rye whiskey for "scientific research for educational purposes." He wished to research the effects of alcohol on human functions, which might not seem surprising—except for the fact that Prohibition had become the law of the land just three months earlier.

It was illegal to "manufacture, sell, barter, transport, import, export, deliver, or furnish any intoxicating liquor except as authorized," though consuming alcohol was not prohibited. Watson had to apply to the Office of the Federal Prohibition Commissioner for permission to obtain alcohol for use in his lab.

Watson apparently obtained the desired whiskey from the Pikesville Distillery. Alongside the permit is May 1920 correspondence with Watson's colleague, Professor Edward Thorndike, who had conducted similar experiments. Watson outlined his plan and solicited Thorndike's views, to which Thorndike responded, "I think your experiment is a very beautiful one indeed." 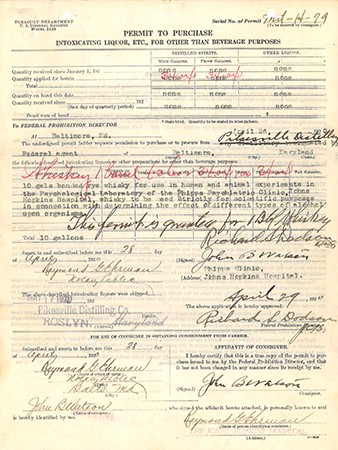 Image caption: James B. Watson's "Permit to Purchase Intoxicating Liquor, etc., for Other Than Beverage Purposes" (1920)

In a comment to Thorndike, Watson describes having subjects throw darts from a certain distance over several hours, while he studied their performance as they consumed alcohol. He observed that, "One or two of the individuals became practically drunk, but apparently the drunker they got the better they shot!"

In June 1920, Watson outlined his experiments to University President Frank J. Goodnow, apparently seeking belated permission. (Perhaps he was simply following the adage that it's easier to beg forgiveness afterward than to request permission in advance.) President Goodnow wondered if "such experiments are desirable and proper under existing conditions," and when Watson forwarded copies of his correspondence with Thorndike and the permit to purchase whiskey, Goodnow asked Watson to discontinue his research until the Academic Council could study the matter. He warned Watson that "this is rather a dangerous field in which to make experiments."

This episode took place long before institutional review boards were created to oversee experiments involving human subjects. Although Goodnow promised Watson the opportunity to justify his research before the Academic Council in the fall, other circumstances intervened. In September 1920, Watson resigned from Johns Hopkins after admitting to an affair with one of his graduate students, which resulted in a messy and public divorce. No further mention exists in the president's records, leaving a permit for a barrel of whiskey—and some interesting correspondence—as the only evidence of this incident from the early days of Prohibition.

James Stimpert is the Senior Reference Archivist for The Sheridan Libraries 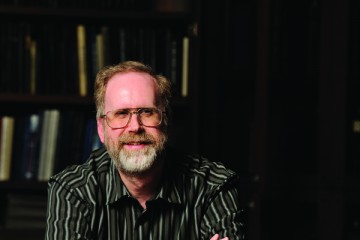 Published Nov 2012
What keeps him up at night? Making sure today's documentation can be accessed in the 23rd century, for one / Gazette 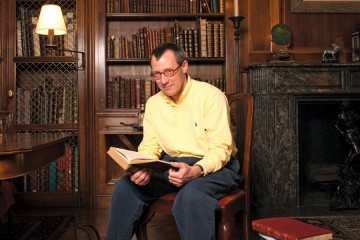 Published April 14, 2015
Professor writing a history of Hopkins discusses events that could have changed the shape of the university