Far fewer stars are born due to intense radiation from quasars, researchers say

Evidence could explain why star formation has slowed significantly 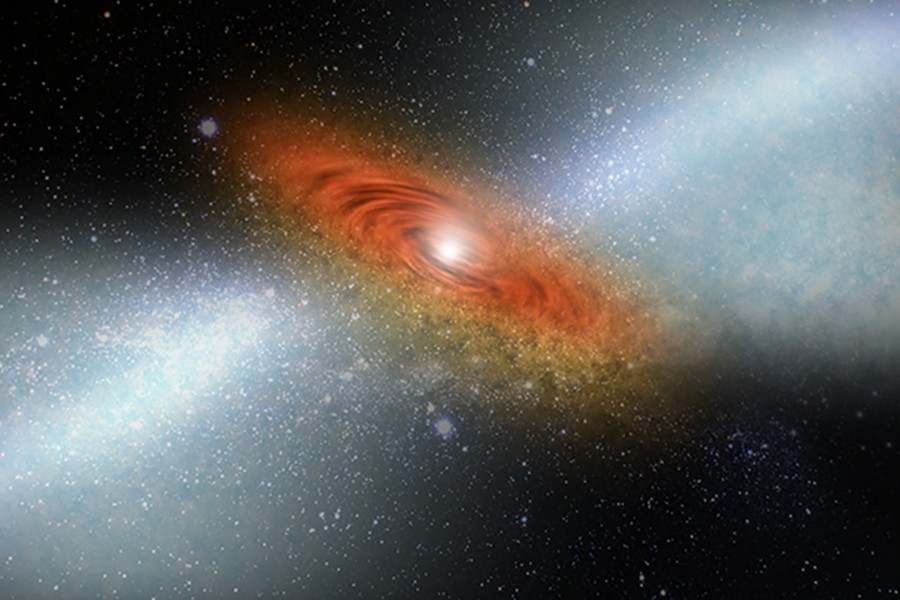 Image caption: In an artist's conception, heated galactic wind shown in the hazy portion of the picture emanates from the bright quasar at the edge of a black hole, scattering dust and gas. If allowed to cool, that dust and gas would begin to form stars.

Research led by Johns Hopkins University scientists has found new, persuasive evidence that could help solve a long-standing mystery in astrophysics: why did the pace of star formation in the universe slow down some 11 billion years ago?

Scientists have puzzled for years over the question of why galaxies slowed their star-making pace to what astronomers estimate is now 30 times slower than their peak pace 11 billion years ago. The chief suspect has been the feedback process from quasars within galaxies, where stars are born. A paper published in the Monthly Notices of the Royal Astronomical Society presents evidence that intense radiation and galaxy-scale winds emitted by the quasars—the most luminous objects in the universe—heats clouds of dust and gas, preventing them from cooling to form more dense clouds and eventually stars.

"I would argue that this is the first convincing observational evidence of the presence of quasar feedback when the universe was only a quarter of its present age, when the cosmic star formation was most vigorous," said Tobias Marriage, an assistant professor in the university's Henry A. Rowland Department of Physics & Astronomy. While the findings are not conclusive, Marriage said, the evidence is very compelling and has scientists excited. "It's like finding a smoking gun with fingerprints near the body but not finding the bullet to match the gun."

Investigators looked at information on 17,468 galaxies and found a tracer of energy known as the Sunyaev-Zel'dovich Effect. The phenomenon, named for the two Russian physicists who predicted it nearly 50 years ago, appears when high-energy electrons disturb the Cosmic Microwave Background, or CMB. The CMB is a pervasive sea of microwave radiation, a remnant from the superheated birth of the universe roughly 13.7 billion years ago.

Devin Crichton, a Johns Hopkins graduate student and the paper's lead author, said the thermal energy levels were analyzed to see if they rise above predictions for what it would take to stop star formation. A large number of galaxies were studied to give the study statistical heft, he said.

"For feedback to turn off star formation, it must be occurring broadly," said Crichton, one of five Johns Hopkins scientists who led the work conducted by a total of 23 investigators from 18 institutions.

To take the temperature measurements that would show the SZ Effect, the scientists used information gathered by two ground-based telescopes and one receiver mounted on a space observatory. Using several instruments with different strengths in search of the SZ Effect is relatively new, Marriage said.

"It's a pretty wild sort of thermometer," Marriage said.

Information gathered in the Sloan Digital Sky Survey by an optical telescope at the Apache Point Observatory in New Mexico was used to find the quasars. Thermal energy and evidence of the SZ Effect were found using information from the Atacama Cosmology Telescope, an instrument designed to study the CMB that stands in the Atacama Desert in northern Chile. To focus on the dust, investigators used data from the SPIRE, or Spectral and Photometric Imaging Receiver, mounted on the Herschel Space Observatory.

Nadia Zakamska, an assistant professor in the Department of Physics & Astronomy at Johns Hopkins and one of the report's co-authors, said it is only in the last few years that evidence of this phenomenon from direct observation has been compiled. The SZ Effect, she said, is a novel approach to the subject, making more clear the full effect of galactic wind on the surrounding galaxy.

"Unlike all other methods that are probing small clumps within the wind, the Sunyaev-Zeldovich Effect is sensitive to the bulk of the wind, the extremely hot plasma that's filling the volume of the wind, and is completely undetectable using any other technique," she said.