A national survey commissioned by the Johns Hopkins Center for a Livable Future has found that nearly three-quarters of adults believe U.S dietary guidelines should include environmental provisions and support sustainable agriculture practices.

But despite clear recommendations by the Dietary Guidelines Advisory Committee to include sustainability language and recommend sustainable diets—based on the well-established link to health—the USDA and the U.S. Department of Health and Human Services opted not to include them in the final 2015-2020 guidelines, which were released in January.

The survey, conducted by Greenberg Quinlan Rosner Research, polled 800 Americans and found an interest in sustainability measures that cuts across partisan political lines. Nearly 83 percent of Democrats, 72 percent of Independents, and 64 percent of Republicans agree that the dietary guidelines should take into account environmental considerations as they relate to health, nutrition, and long-term healthy food availability. Americans also indicated a willingness to make sacrifices in cost in order to support sustainability, and 70 percent of all survey respondents said that the agricultural industry has a responsibility to produce food in a sustainable way. In contrast, a mere 30 percent said the industry's responsibility is to provide food at a low cost.

According to Health.gov, the dietary guidelines for Americans are the "go-to" source for nutrition advice. Recommendations are updated every five years and are designed to help Americans make health nutrition choices and provide the foundation for U.S. nutrition policies and programs.

"The decision by the U.S. Departments of Agriculture and Health and Human Services to strike the sustainability language from the dietary guidelines directly contradicts our findings of strong support from Americans," says Bob Martin, director of the Food Policy Program with the Center for a Livable Future. "The long-delayed release of the dietary guidelines represented a unique opportunity to prioritize sustainable agricultural production so that Americans can have access to safe, affordable food for the foreseeable future—but the agencies missed the mark." 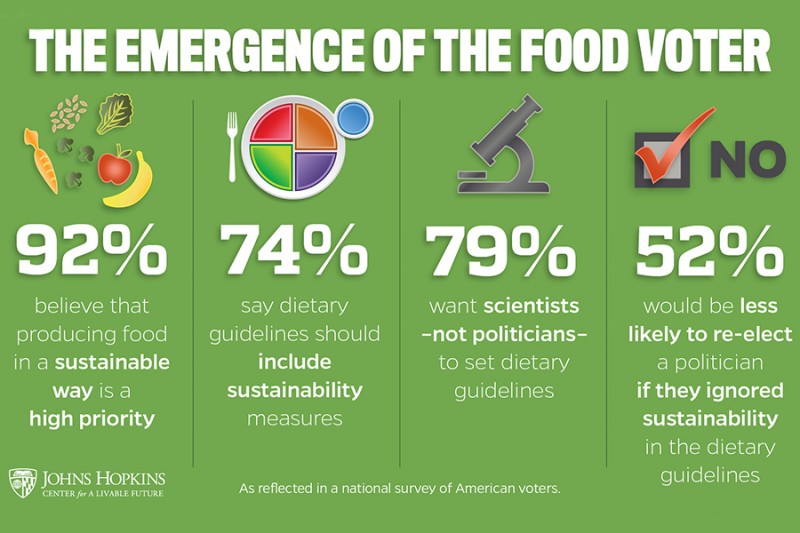 Americans also voiced a strong preference for experts—not politicians—to develop the dietary guidelines. By a nearly 4-to-1 margin (79 percent to 20 percent), survey respondents agreed that scientists, doctors, and health experts should be able to create recommendations free of interference from Congress. Members of Congress do not directly vote on the dietary guidelines, but they remain an influential part of the process. A majority of survey respondents (52 percent) said they would be less likely to vote for their member of Congress if he or she voted to remove food sustainability from the dietary guidelines.

"Our poll clearly indicates that people care about how their food is produced and want that knowledge as part of their dietary decisions, as well as those dietary recommendations being determined by experts and not politicians," Martin says. "Members of Congress may ignore those opinions, but our poll shows they do so at their own peril, risking the wrath of voters in the future."

Key findings of the survey include: