Johns Hopkins University and the Baltimore Police Department announced today a joint effort to apply data and research to policing in hopes of reducing violent crime. 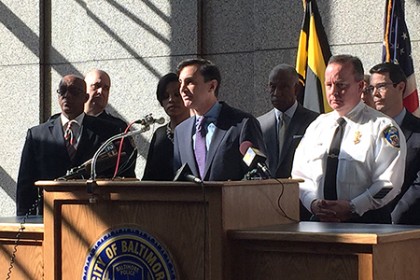 "We know that persistent violence in Baltimore tears at the fabric of our neighborhood and of our city," Johns Hopkins University President Ronald J. Daniels said at a news conference this morning announcing the partnership. "You don't have to look very far to see the pain that violence is causing the families, friends, neighbors, and communities of the victims. Our entire city is affected by this scourge. ... The goal of this project is to put knowledge into action to make our community safer."

The effort will be directed by Daniel Webster, director of the Johns Hopkins Center for Gun Policy and Research, and Sheldon Greenberg, professor at the Johns Hopkins School of Education. Violence researcher Cassandra Crifasi of the Johns Hopkins Bloomberg School of Public Health will serve as deputy director. The JHU research team will work closely with Baltimore Police Commissioner Kevin Davis and other senior leaders in the police department.

Webster told The Baltimore Sun that the effort is "sort of a service project" in answer to the question: "How can Hopkins help Baltimore police in being most effective in combatting violent crime and doing it in a way that repairs the relationship in the community as well?"

The researchers and police have worked together to identify six priority projects to begin their violence reduction efforts: