Johns Hopkins students build 3-D printers from the ground up 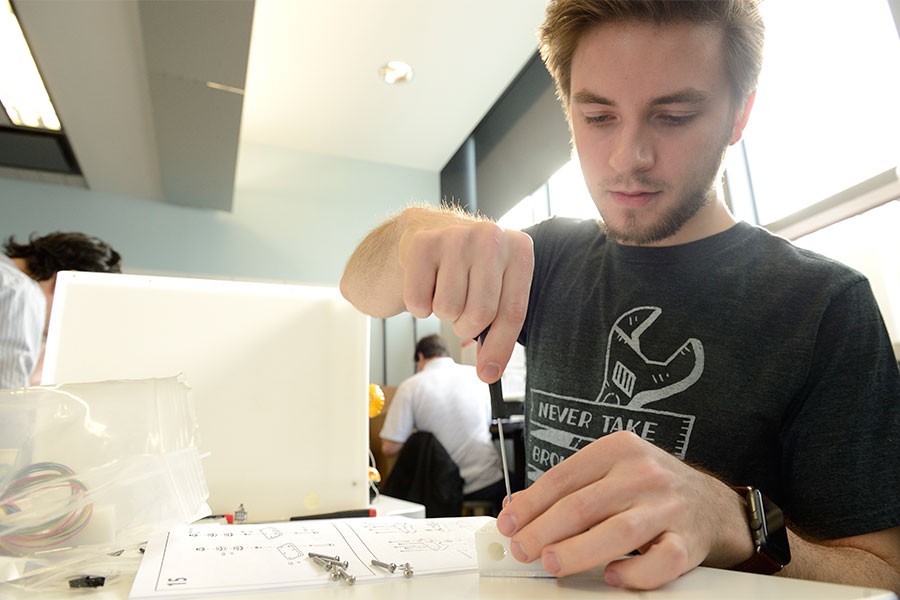 Image caption: Ryan Demo, an electrical and computer engineering major, assembles a 3-D printer of his own

From a whimsical gadget to New Balance shoes to simulated organs, you can "print out" almost anything with a 3-D printer. 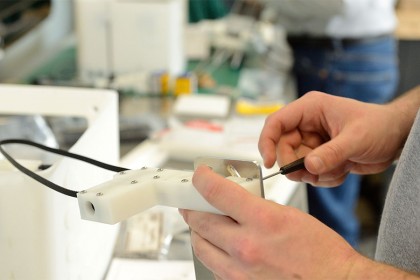 Image caption: Inside the DMC's MakerSpace, students use screwdrivers, mallets, and other tools to build 3-D printers from scratch

These mini factories bring digital files to life almost instantly, and increasingly, people are even constructing the printers from the ground up.

"Building a 3-D printer is a lot like assembling Ikea furniture," says Ryan Demo as he cobbles together parts, guided by a 57-step instructional booklet.

Demo, a Johns Hopkins University sophomore, is building a printer of his own from scratch as part of a three-day Intersession class. From inside the Digital Media Center's MakerSpace—a creativity lab equipped with power tools and solder stations—Demo and five other participants set up shop, chiseling away at parts as they first assemble the frame, a high-density polyethylene otherwise known as cutting board.

The class is taught by by Evan Roche and Harrison Tyler, the duo behind Buildclass, a Baltimore-based digital fabrication design firm. Roche and Tyler cut and package the 200 plus parts needed for each printer in ready-to-make individual kits. The workshop series covers everything from assembly and operation to basic wiring and writing custom code. Participants paid $1,600 for the three-day course, after which they get to keep the printer they constructed.

"It's better than buying a 3-D printer," Demo said. "This way you learn how the entire thing works from the ground up. We did the physical structure of the printer, we did the wiring, we could see the software, and we learned the computer side of things where you prepare the 3-D file and it comes to the printer."

On the second day, the group soldered wires and connected the motor to the micro controller. By the third day, the machines powered on and printing began. Class participants tinkered with the settings, optimized the machines, and printed basic shapes. The process is an additive one, where an extruder deposits material in successive layers to create an object.

Joey Lubin, a master's student in chemical and bimolecular engineering, planned to print edible table decorations for his sister's upcoming wedding. Another student planned to print a part for his '67 Ford Mustang. Demo later printed a DSLR camera mount.

The application extends well beyond sweets and personal printables. Brian Iglehart, a staff member at JHU's School of Medicine who participated in the class, used his printer to custom-produce automation parts for his laboratory.

"3-D printing in the past was made for trinkets, but now were getting into 'what can we really do with that,'" Iglehart said.

That's what Roche and Tyler, currently the Entrepreneurs in Residence at Maryland Institute College of Art, want to know. The two are specifically interested in bioprinting—the 3-D printing of biological materials. They're designing a low-cost, high-tech machine that will help bridge the gap between donor lists and organ shortages.

The duo launched Buildclass—a series of community workshops at schools, institutions, labs, and makerspaces across the country—last year when others expressed interest in building their own machines. Each workshop improves upon the previous version of the printer. The latest version features a syringe-based application for more flexibility.

"We want to provide the opportunity to understand the technology on a deeper level," Roche said.