Fourth event in JHU Forums on Race in America set for Feb. 2 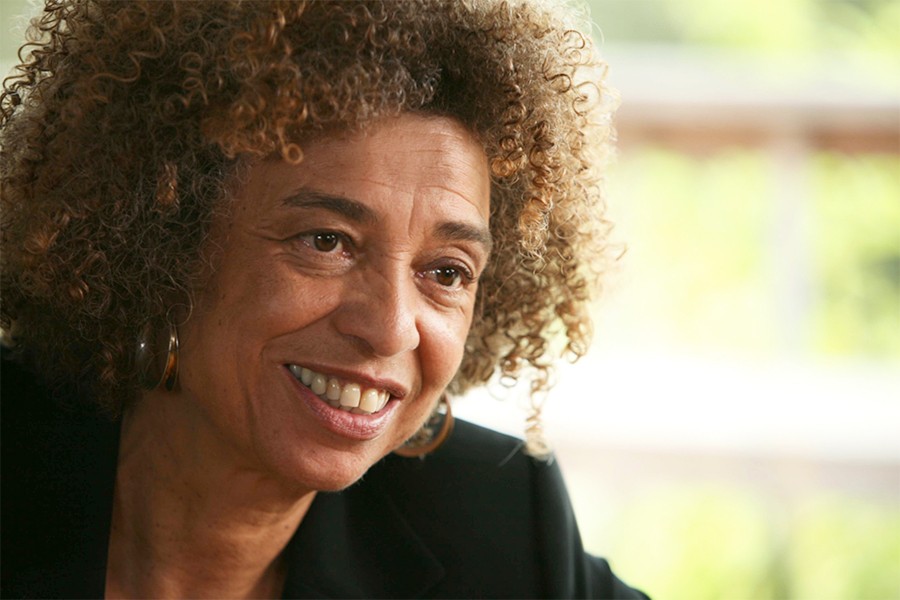 Angela Davis, a leading thinker on issues of racial politics and criminal justice reform for nearly five decades, will visit Johns Hopkins University next month as part of the JHU Forums on Race in America.

Davis, who first rose to prominence as a 1970s counterculture icon, has long been a vocal advocate for civil rights with writings and speeches that explore topics such as black liberation, feminism, gay and lesbian rights, and the U.S. prison system. She will speak at 7 p.m., Feb. 2, in Shriver Hall on JHU's Homewood Campus.

"You can't really understand the latter half of the 20th century without knowing who Angela Davis is," says Lester Spence, a Johns Hopkins professor of political science and Africana Studies and author of the recently released "Knocking the Hustle: Against the Neoliberal Turn in Black Politics."

As a young man, Spence says, he "rarely if ever read about black intellectuals who had radical politics, … who believed that the way our class structure was organized was antithetical to humanity."

In his early studies of politics and prison reform, he adds, he found Davis to be one of the rare voices bringing race to the forefront of the discussion.

"For a kid trying to find his own political way, that was really important," says Spence, who is teaching a course at JHU this semester called "Black Politics: Black Lives Matter" that will integrate Davis' work.

Davis was born in Birmingham, Alabama, in 1944 and studied at Brandeis—where she was one of three black students in her freshman class—and at the University of Frankfurt in Germany. She was inspired to return to the U.S. from Germany in the 1960s by the Black Panther movement, with which she became associated.

Davis first garnered public attention in 1969, when she was fired from her position as an assistant professor at UCLA for her affiliation with the Communist Party. A year later, she was charged in connection with the armed takeover of a California courtroom, an event that led to four deaths and briefly landed Davis on the FBI's list of Ten Most Wanted Fugitives.

An all-white jury ultimately acquitted Davis of all charges related to that high-profile crime. But her fight for freedom, a struggle that included months of solitary confinement, led hundreds of activist groups to support her cause and helped to amplify her voice.

"I didn't understand the intricacies of the court case at the time, but I was enamored of her," says Katrina Bell McDonald, a professor of sociology at Johns Hopkins whose research focuses on marginalized groups.

"She was a physical icon, with her big afro and her outspokenness and her height—she was just a towering figure. We all replicated her growing up."

In the decades since, Davis, who turns 72 later this month, has become one of America's most prominent public intellectuals. She is the author of nine books on political and social issues and a founding member of Critical Resistance, a grassroots national organization dedicated to dismantling the prison-industrial complex. A recurring theme in her recent work has been the range of social problems associated with incarceration and the criminalization of communities most affected by poverty and racial discrimination.

"She articulates beautifully the liberal democratic and intellectual position on the plight of poor and the downtrodden, like the imprisoned and the racially subjugated," Bell McDonald says.

Davis is a retired professor with the History of Consciousness Department at the University of California, Santa Cruz, where she also previously directed the university's Feminist Studies Department.

Hollis Robbins, director of the Center for Africana Studies at Johns Hopkins, says she became familiar with Davis through her studies of prison reform movements. Davis stood out, she says, "as someone who was never afraid to speak to power and to participate in the great American protest tradition fearlessly."

Robbins, Spence, and Bell McDonald are all part of the steering committee for the Race in America speaker series, which has also brought writers Ta-Nehisi Coates and Charles Blow and filmmaker Dawn Porter to campus over the past nine months.

"Some of our students," she says, "are really wanting to engage with her on questions of political activism." 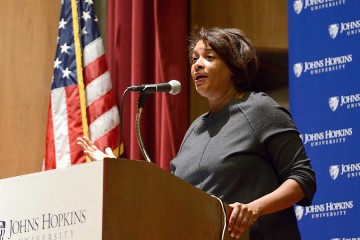 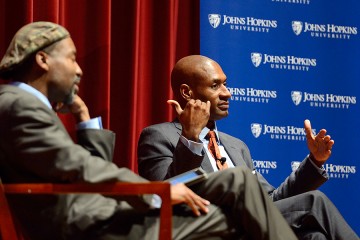