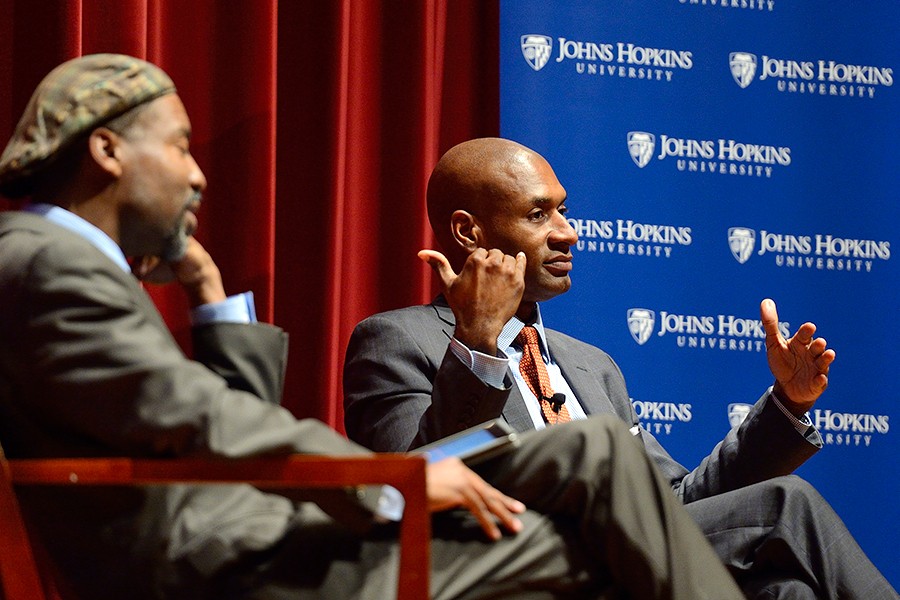 Image caption: Charles Blow, columnist at 'The New York Times,' was the featured speaker at the second event in the JHU Forums on Race in America series.

Charles M. Blow, veteran columnist at The New York Times, took the train down to Baltimore on Wednesday for a conversation about race.

The talk he led along with Johns Hopkins University political science and Africana studies professor Lester Spence touched on issues like police brutality, urban hypocrisy, and the rise of the Black Lives Matter movement. He shared perspectives formed during his boyhood in a small Louisiana town where the vestiges of slavery never vanished.

The event, which took place at Shriver Hall on JHU's Homewood campus, was the second in the university's JHU Forums on Race in America series, designed to spark debates on inequalities and divisions seen both nationally and in Baltimore. The first such forum, led by acclaimed writer and Baltimore native Ta-Nehisi Coates, took place last spring just days after the unrest that followed the death of Freddie Gray in police custody.

This time, as Spence noted, the day's news cycle brought forth yet another racially charged incident of violence: in South Carolina, where a sheriff's deputy was fired for his rough handling of a student.

Blow, who pens a biweekly column for The Times on politics and social justice and appears regularly as a commentator on cable news shows, said he's grown "tired" of feeling anger at incidents like one in South Carolina and the viral videos that often accompany them. Instead, he said, "I want to stay mad for all the people who don't have the luxury of a video."

Replaying these videos without flinching, he suggested, is "pornographic." And in isolating these incidents, we lose focus on the larger systemic backdrop of bias and injustice.

"We want to disconnect them because we want to sleep at night," he said.

At the same time, as a newsman Blow himself has zeroed in on specific cases, such as the police shooting death of Samuel DuBose in Cincinnati this year. Blow wrote a column about the DuBose family after spending a day as a personal witness to their grief.

"That's not about black—that's about loss," Blow said, agreeing with Spence on the importance of connecting readers to "the universal quality of the human spirit."

Though he trades mostly in words these days, Blow started his journalism career specializing in graphics—translating data through charts and illustrations. "I never went to art school," he said, but "I read every book on graphic design I could find." He worked for The Shreveport Times in Louisiana before The New York Times plucked him as their first-ever graphic design intern. He's since spent the majority of his career there, apart from stints at National Geographic and The Detroit News.

Last year Blow published his memoir, Fire Shut Up in My Bones about growing up in Gibsland, Louisiana, in the 1970s and '80s. At Hopkins, he spoke of his education in what were, in effect, segregated schools and how that ended up shielding him from many stereotypical challenges for minorities.

"Every room I was ever in, black people were the smartest people in the room," he said, adding that as an adult, "the way I experience and express race is almost not conscious. ... I have zero insecurity about it."

Blow's experience in the Deep South also informed his perspectives on the persistent divide between what he calls "the two black Americas." There's the western and northern urban centers, where people migrated after slavery; and there's "the Black Belt" from west Texas to the Carolinas, "where people were left behind," he said. Of the latter, Blow said, "the kind of aesthetic there, the kind of ethos of black America, is very different from what is happening in our cities."

But he pointed out that most of the incendiary racial conflicts we're seeing today take place in the urban areas, which are "younger in terms of racial migration" and experiencing a "great reckoning" with these issues. On gentrification, he said, "that's a liberal problem happening in our liberal cities."

When an audience member asked him about how to construct "a new black political imagination," Blow spoke with respect for the Black Lives Matter movement, which he said "is at the vanguard of racial justice in this country." He described the activist movement as "very pragmatic" and "politically sophisticated," attempting to fix the system rather than destruct it.

Likening it to the Civil Rights movement, he said, "there's a certain hopefulness and faith that things can be fixed." 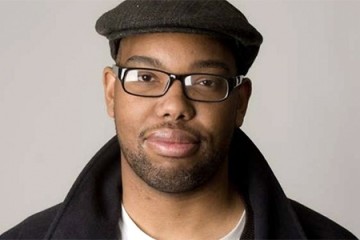